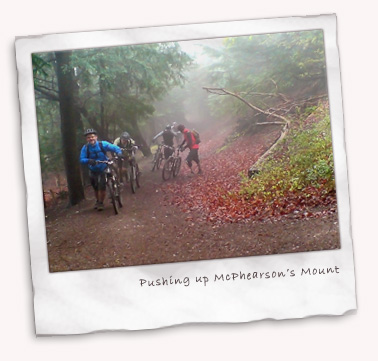 Easter weekend inevitably served a curve ball into our midst. Starting with Lee and Al (congratulations on the birth of your first mini-Mole!) and continuing with Colin and Tony going for the Swinley based brownie-point option on Saturday it was perhaps to be expected that Easter Sunday would see a depleted turnout.

In the end though, things weren’t too bad. Dave, John, Darryl, Neil, DaveP and myself met at Bockett’s as usual for a 21 mile ride across the Surrey Hills. As I arrived, everyone asked where we were going – err, good question, that was something I’d been wondering myself as I rode up to the car park.

The thing was, there’d been a fair bit of heavy rain since mid-week, the kind that tends to fall steadily for many hours so the chances of the conditions being as grippy as they’d been on Thursday night when Tony and I nipped out were not good. As it turned out, they were awful!

One thing I didn’t fancy was a flinty game of ping pong over toward Epsom Downs. Fun as it can be, I’m just a bit nervous about the loose spoke on my rear wheel to want to hammer it over long rocky runs, so I suggested heading toward Abba Zabba knowing that things would be marginal. At least once past that it would be a sensibly paced run along the valley back toward Dorking.

Of course, this meant another tramp up to Ranmore first. I’m not a great fan of the climb from Yew Trees but prefered it over the prospect of another lung stretcher past Tanners. Maybe that means I’m getting old – wait a minute, after last weekend’s birthday, I am old!! Never mind, having got the climbing out of the way we turned to Badger Run and Collarbone to get us over to White Down.

Quickly it became clear that conditions were treacherous. It felt like autumn again with lots of greasy clay and wet tree roots to contend with, producing alarming front and rear slides at the slightest provocation. I’m not sure what the collective noun for mincers is; I guess it would have to be a scream of mincers, even if we all kept our screaming to ourselves. I even had to dab at one point… Seriously though, things were pretty dicey and visibility was suspect too with low hanging cloud keeping every surface lightly slick with moisture.

As we neared Abba Zabba I started thinking it wasn’t such a good place to be so we headed down White Down and through the gate to take the trail over toward Numbskull, missing out Abba Zabba and Blind Terror 1 and 2. Even so, Numbskull was spooking us and for the first time I think we all got off and walked at key points. I don’t think anyone fancied lying in the woods waiting for emergency services to arrive on a day like this!

It didn’t stop us riding the good bits though even if we actually stopped to size them up for a change. The problem was not just the wet roots—of which there’s more than the odd one on Numbskull—but the fact that tyres were quickly clogging with clay and leaves. Not a day for heroics really.

Once past though we headed toward Dorking with John showing us a slightly different route back up to Ranmore instead of our usual tramp up the trackway from Hole Hill. This time we were to take the track past the chicken runs before crossing the railway and climbing up McPhearson’s Mount, named after one of John’s riding buddies on account of him being the first person in the group to clean it. We wouldn’t be troubling that claim ourselves with all the dampness around either!

Before we tackled that though, it was time for some impromptu repairs as Neil’s cassette lockring decided to become unlocked! What looked like a potentially terminal situation was saved by Dave and Neil’s collective tool arsenal which at least got the bike moving again. I munched a hot cross bun while we waited – well, it was Easter after all…

Repairs and climbs safely dispatched we got ourselves back up to Ranmore and came down through Denbies to the A24, still getting caught out by long stretches of the deadly clay and chalk. Neil decided it was time to cash in his chips while the temporary repair held and turned back to Norbury and the car park while for the rest of us a rendezvous with the tea shop at Box Hill beckoned.

I haven’t been up there for weeks and still find I hate the climb. In faux-singlespeed mode I managed the whole climb in middle/middle, standing up all the way up as my noodle legs can’t turn that big a gear seated! Ouch!

With fresh fuel on board we came down via Juniper Bottom, our progress now checked by lots of walkers on Easter egg hunts after which we turned for home via Norbury and Bockett’s Farm to get home on time for a change. Today wasn’t about technical riding or a particularly intense workout but even so those 21 miles certainly added up as we didn’t shy away from the hills.

Having seen Colin’s Swinley report I can’t help thinking it was a shame I couldn’t make the Saturday ride though. Perhaps given the conditions a Leith Hill ride would have made more sense too? Oh well, you live and learn…