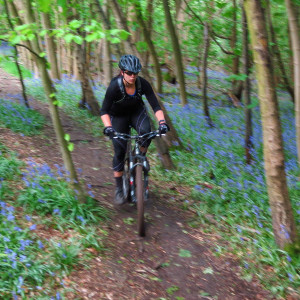 Well here’s a route I haven’t tried in a long while. One of our easy cross country rides out past Reigate, round Gatton Park and back across Walton Heath to Headley.

Seems a long way to go for an Eccles cake but there you go!

My morning started as it has for the past few weeks, taking my Trek District round to Dave’s to exchange for his Orange Gyro while my Five continues to hover between life and death. This week my replacement forks should arrive which is a useful step forward.

I’ve now got the Gyro in a reasonable set up but would still exchange Dave’s WTB saddle and carbon Carnegie bars for something more conventional. It has to be said though that it does feel exceptionally stable heading downhill though.

At the car park at Bockett’s we had quite a crowd as we were joined by some of the ladies who are going to show us the way at Mayhem this year, as we field our first women’s team for the event.

Chrissy and Yvette joined us for the ride but Jo and Ginny realised – much to their disappointment – that our route was likely to prove a long one in terms of time; they’d obviously heard how much talking we do…

So while Jo and Ginny headed off for a shorter ride, Chrissy and Yvette joined Lloyd, Jez, Karl, Dave, Dandy, DaveW, Andrew, Tony2, Big Al, JohnR, Kev and myself (14 in total) heading off toward Leatherhead.

It was a pretty cool breeze blowing as we set off and I was glad of my choice of long-sleeved top to keep me warm. I was looking forward to riding the Gyro to Reigate as I wanted to try out this long-legged 29er on a longish XC run.

Pretty soon we’d negotiated the easy run down to the River Mole and were startingon the long, steady climb up to Headley via Alsation. From the river it’s roughly four miles of uphill; not without some minor respite, but enough to get you well and truly warmed up by the time you reach the Headley car park.

Alsation was characterised by John and DaveW disappearing into the distance while the rest of us set a brisk but manageable pace behind. Not having ridden this for a while (I gave up in mid January when the claggy surface gave me a big fright heading downhill!) I found it quite enjoyable today. Running a wide range 1×10 set up on the Gyro is perfectly sufficient for this sort of climb. 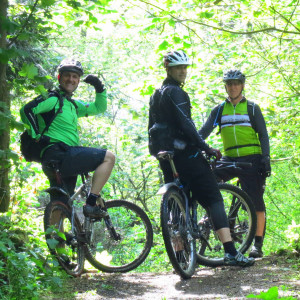 At Headley we crossed the road to head toward the North Downs Way at the top of Pebblecombe Hill but stopped at the top of the Green Lane with Dave’s tyre spouting gouts of latex everywhere. That’s what you get for claiming we don’t have problems with punctures because we run tubeless!

The pit stop gave Dave an opportunity to deconstruct Dandy’s Big Bastard pump, much to Dandy’s chagrin, while some of discussed the idea the Mayhem men should ride night time laps in ladies negligees, a prospect I find faintly terrifying. What a shame I won’t be there…

Once underway again we circumnavigated the field with the short, steep climb which the Gyro appeared to demolish and pressed on for Colley Hill. The views today were spectacular, with great visibility and with rain predicted in the afternoon there seemed plenty of people out and about.

We made our way into Gatton Park and meandered our way through the singletrack, again with the Gyro feeling quite dependable even though parts of the trail remains quite greasy and slippery. There seemed to be bluebells as far as the eye could see.

We spat out near the stables, the sharp drop giving a moment of trusting to luck although it is actually far, far easier than it looks.

But a Reigate ride is more about covering the ground than getting gnarly and so we had skirted the Park and were climbing back up to the tea rooms.

I switched the shock to fully locked out to see how it affected things and have to say it seemed to help. It’s not a bike to stand up and grind on but with an 11-36 rear cassette there’s gears a-plenty for climbing. I span up without stopping, keeping to a steady but brisk pace but I think John and DaveW were still faster than me despite stopping halfway up for a chat! 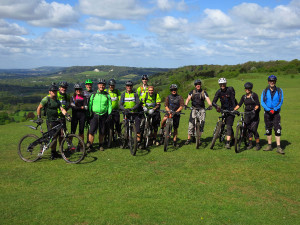 Back the way we came then and onto Colley Hill for a photo op before cutting across the motorway and into Margery Woods.

I do enjoy this modest singletrack section which threads it’s way alongside the M25 for a way before you come out near Walton Heath golf course. Here the headwind we’d been avoiding in the trees became apparent but as we were only cruising nobody minded too much.

We just kept a steady pace up and soon we one the return climb up to Headley for the much anticipated tea break, bumping into Al while we were there. I managed to catch the last warm Eccles cake, a treat worth searching out, while others succumbed to the delights of egg and bacon rolls.

After that we were homeward bound, via Secret Singletrack which – on account of our large group – was too heavily traffic’ed for to set anything like a decent time on even though it appeared to be running well.

A better opportunity came on Life on Mars, another trail I haven’t been down for a while. Some of the turns have altered, with straighter sections followed by tighter turns and I didn’t really feel I’d been going that fast but my stats say I was only two seconds off my PB. Very strange as the Gyro, on that fast but twisty singletrack had felt a bit 29er-ish – you know, perhaps just a touch unwieldy.

Alsation also proved quick – very quick in fact, with the Gyro feeling a bit 29er-ish again – you know, fast rolling and stable at speed! I got the road jump just right and carried a ton of speed into the final section, knowing Karl ahead of me was clearing the way.

The homeward few miles from Leatherhead were straightforward although I could see a few riders flagging as the ride group spread out. Total door-to-door mileage for me as 25 miles but that wasn’t enough for John or DaveW.

John carried to head up to Ranmore and onward to Leith, Holmbury, Winterfold and back via Box Hill to rack up a stupendous 59 miles for the day. A big effort off-road; how he had the mental strength to ride virtually past his front door on the way up to Ranmore I don’t know!

Dave also put in 42 miles or so, having ridden to meet us from Epsom Downs.

These guys are crazy (shakes his head…)