Poor Barrie! Today was not a great day for him to be out on a mountain bike. Not that he hurt himself or anything mind; just that staying in bed might have suited him better. 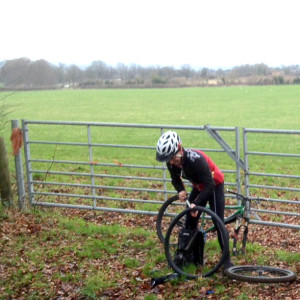 Things started well enough anyway. As well as any ride in the middle of January might start, with temperatures hovering around 1° and the threat of snow from forecasters up and down the land.

We had 10 riders massing at the start and managed to pick up a couple on the way – DaveC, Kev, Tony, Al, DaveW, James, Andrew, Barrie, JonH and myself. Al had suggested Leith and we all seemed quite happy to head that way, the only question was how to get there via a route that would help us avoid some of the worst mud that we knew (just knew) was out there.

Well, there didn’t seem to be an easy way, so we headed off up the Admiral’s Track and found that the days’ riding was likely to consist mainly of lots of grindy, draggy mud wading accompanied by the sound of expensive bicycle parts wearing out.

Added to the mix, it’s the annual hawthorn hedge trimming season. This became very apparent as we headed toward Polesdon, deciding to take the bridleway to Tanners Hatch for a change in the hope that a long haul up to Ranmore would help keep us warm.

This was all very well as a plan, but reality dictated that at this point anyone who wasn’t running tubeless tyres on the long stretch of hawthorn hedging we’d just passed was likely to suffer a puncture. Which proved to be the case for our southern-based , (Okaaaay) Mackem lad *. 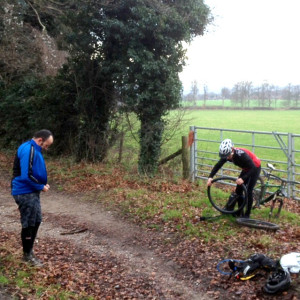 Fortunately, Barrie is a laid back kind of guy and took the necessary ribbing in his stride while he got to work. In less than a chilly 15 minutes we were rolling again, making steady headway through the deep mud with DaveW finding traction where technically none seemed to exist.

After a careful controlled plunge down under the Stone Bridge, we were just settling in to the Tanners’ climb when disaster struck for Barrie again, this time with his half link singlespeed chain snapping on him.

This is rarely a welcome event but again we accepted another extended opportunity to save energy in the freezing cold winter conditions while Barrie got to work making a slightly shorter chain out of what was originally a slightly longer one.

By the time we got going again most of our group (swelled by the inclusion of Lloyd who we’d picked up at Polesdon and Lee) had moved on to wait in the freezing conditions at the top of Ranmore while DaveW, Barrie and myself brought up the rear.

Halfway up the Tanners climb Barrie’s chain (and with it his ability to endure the cow pats that life puts in your way) broke again. This time there was nothing for it but for Barrie to turn for home, scooting down the hills and walking on the ups. The 13th was bad luck Barrie!

Our drawn out assault on Ranmore meant we were all pretty cold and keen to get underway again. As with last week, we headed for McPherson’s descent down to Westcott, which is a fast-ish, straight-ish slither downhill on wet leaves, chalk and the odd bit of tree root.

Bringing up the rear Tony and I could tell that the 10 riders ahead had been carefully modulating their braking efforts by the aroma de disc-pad. Kudos needs to got to James today though for riding his very, very old rigid Raleigh with V-brakes. The sound of gritty pads on wheels rims is one I’d hoped had been consigned to history.

Having worked our way across the back of Westcott we soon started on the Rookery climb where I resorted to the granny ring, an usual event for me. Today I just didn’t feel I had a great deal of power to really dig in. After mustering at the top for a breather, Lee decided it was time for him to head back while the rest of us pressed on up Wolverns Lane.

Parts of this are currently in quite a sorry state, with some pretty deep mud. This led us to head for the tail end of Sumer Lightning via a slightly circuitous route (the same we did on the Xmas lunch ride) in an effort to avoid the hub deep puddles. 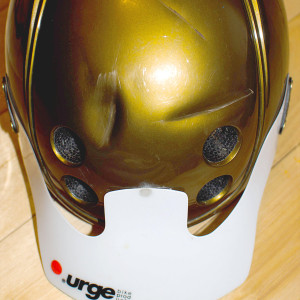 Somewhere along Wolverns Andrew managed to clout his head pretty hard on an overhanging branch with enough force to make him see a few stars and put a couple of substantial dents into his Urge helmet as you can see. It was an eye-opener for him and the rest of us!

Passing Summer Lightning we were soon heading for the Tower for what felt like a well overdue tea stop. After just about managing to get up the Tower climb – after forgetting to wind my forks down – we found the Tower was possibly the coldest part of Surrey today.

Cooling rapidly while we waited for cake of various descriptions and hot drinks, we huddled in the lee of the tower trying to keep out of the north wind. It really was jolly cold even in the weak sunlight.

A concerted calorie-consuming effort ended with us deciding that given our painfully slow progress so far our best bet was to headed for home. I was glad to get going again as I could feel myself getting colder and colder.

We tackled Personal Hygiene via a selection of wayward lines and then made our way over toward the cricket pitch via the main track, not in any rush to try some of the usual side-trails around.

By the time we’d passed Deliverance I was started to feel more comfortable as Al led us on an unconventional (and slippery) line down to the start of Waggledance which was populated by a large number of relatively new (it seemed to me) riders.

In fact there seemed a lot of people out and about on the trails today in large groups although I saw far fewer pairs and smaller groups than I’d usually expect.

Summer Lightning was blessedly dry and I had a clear run all the way down since Jon and Al disappeared into the distance. I wasn’t hanging around myself given the conditions and enjoyed the whole run immensely.

The rest of the run back toward Westcott was tempered by more of that heavy-going mud, so much so that we took the route through the rhododendrons to the crossroads and then set off down the lower reaches of Wolverns.

Kev and I made a good fist off the small jump onto the sandy trail below which was pleasing and then it was a case of trying to get a rhythmn going while the cold started to ebb our energy away.

Tony’s arrival at the top of the Rookery descent was accompanied by the failure of his Hope quick release seat clamp but fortunately we remembered that Nirvana Bikes was open and headed there with Kev’s credit card burning a hole in our pockets.

Tony was long enough in the shop for him to have me worrying he’d bought himeslf another bike (nearly five minutes) before he emerged with another Hope quick release seat clamp. Let’s see how he gets on this time!

From Westcott we opted for Low Med to get us back up to Ranmore, with my energy reserves nearly depeletion. It was one of those days where everything felt twice as much effort as it should although the main pack flew up.

Up on Ranmore it was time for another new trail, this time Golden Nugget. This is another terrific little trail off the ridge but it’s not at it’s best at this time of year.

The surface is mainly chalk and clay with a leafy dressing and some of the turns had very little grip – Tony understeered straight off into the undergrowth at one point and I’m sure others had problems staying upright. Even so, the potential for this one is clear and I look forward to trying it when the trails finally turn dusty.

I final tortuous grid up through the Polesdon estate via the old gatehouse eventually brought us back to Bockett’s car park at nearly 1:00pm, a late finish after an eventful 25 mile ride. Well done to all.

* I might be wrong about where Barrie comes from!