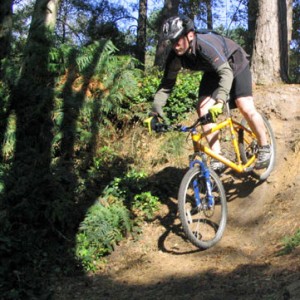 Yes, we had another ride characterised by the mud….or rather the lack of it. Where is it all go in 4 days? The image is from 2003, continuing the theme for retro photos where we forgot to take any on the ride owing to having too much fun!

12 Moles assembled and were ready to go by the appointed time. I know there was a 13th Mole as I got word at the Tower where he left about 10 seconds before we arrived! He knows who he is!

So Karl had suggested we head over to Leith Hill and despite my reservations about the amount of mud we headed over that way. We climbed up Yew Trees and kept the pace brisk with a reasonable balanced group average speed was good. The first descent appeared in the form of Landrover where I took to the middle of the pack. About half way down the smell of brakes pads reminded me that I ought to have told the recovering DaveW that there was a new obstacle since his last run down there. Still, no new breakages eh!

Grip levels were high and the mud, apart from the puddles on Admirals track, had all but vanished. The Moles were in a playful mood and we didn’t hang around as punctures were abscent in the first three quarters of the ride.

On towards the Rookery climb the grind began but it wasn’t until the final 20m that Keith on his C456 SS shot past, unable to maintain my diesel cadence. Actually I was spinning quite nicely as I’d just changed my granny ring to a 26, giving me 26/36 on the front for a much more harmonious choice of ratios. At the top of Rookery we head up Wolverns Lane to our normal stop and then took the right hand turn for the second consecutive ride on this route.

This takes us down a gnarly little trail which was dispatched quickly despite some of JonH’s questionable lines (he blamed the bloke in front!). I was having fun. Then came a shorter grind than normal before heading right again and taking in a little bit of single track before heading up again as BigAl showed us some new trail. The new trail for me was quite techy in terms of off camber and roots and we mssed the Deliverance 2 climb that I later found out we were supposed to take but instead almost ended up in someones back garden where BigAl introduced a new obstacle by nudging a rope and wood swing as he went past. This required a correctly timed passing run so I was finally glad of all those hours I played Manic Miner on the Spectrum to ensure I missed it!

Back up we headed and this time took a route that ended up running down towards the Stephan Langton and then back up the other side. This does leave rather a long climb up but worth it! We took in more singletrack on the way back to the tower and were soon there where we met Toby from the Dorking Cocks. The wind was rather cutting but the edge taken off with a hot drink and two pieces of cake. MarkW arrived with family  and we briefly chatted before deciding to move on and try and get warm. Karl took us down the more gnarly face of Personal Hygiene and the did some trail pioneering owing to a faulty sense of direction before we climbed back up to Chicken Wings (other trail names are available) and I had a successful clearance following JonH, which made a nice change.

I decided against Deliverance but took a rather nervous Kev down the left and side goat track to meet the other at the bottom. A high speed Waggledance followed before making the most of the superior grip on Summer Lightning. Wolverns Lane proved to be quite busy but DaveW was having blown seal issues on his Revs so after a uninterrupted run down the Rookery, an allen key and an adjustable wrench soom hammered it back into place.

Low Med was the chosen route back up to Ranmore and a fast run down Dearly Beloved was interrupted by all manner of people enjoying the sunny day. Karl flatted but chose to fix things himself as time was now getting on and the rest of us headed for home.

Rob got a puncture in the final half mile but managed to nurse it home to the car park. We all agreed it was an outstanding ride which came with unexpected levels of grip, especially if you had ridden on Wednesday night!