With clear skies and the month of January the air was icy as I headed off to the Farm to meet up with other Moles. 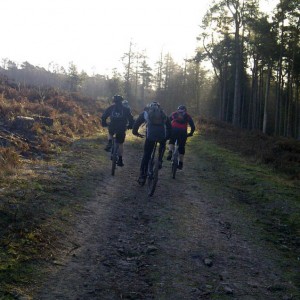 Not having been anywhere near the peak of my un-fittness I wasn’t really sure how I would cope with a ride to Leith Hill and without Andy661 to guard the rear of the troop I was expecting to be a lonely figure at the back.

Robin, Karl, Big-Al, DaveS, JohnR, Jez, DannyP (again? it’s OK, he hadn’t had an argument with his wife, she was on a course), JonH, Tony joined me at the Farm and we headed off rather late, even allowing for waiting for PaulM.

Taking in the usual sort of route the lead pack cruelly subjected me to a slog up Hogdens Lane where I was glad that a puncture slowed a section of the pack down. Spirits were high as the day was looking bright and clear despite the low temperatures. We headed straight down Landrover only to be halted half way down by a fallen tree that on closer inspection wasn’t being supported by very much. Having already gone under it I was glad it hadn’t moved as we broke off the worst of the obstructing branch.

Through Westcott and off up Wolverns Lane via the Rookery Climb I wasn’t setting any records but was able to keep the pace steady. The large hole appears to have been worked on with a bank in place on the left which could be ridden round. Somewhere near the top of Deliverance a lonely figure rode into view and a super late PaulM came into view. Apparently he’d trailed us all the way having decided he WOULD have a ride even if it meant solo.

CW was next on the list, especially for DannyP, who seems to be on form for “shredding the ‘nar” at the moment. With that bit of fun out of the way it was up to the tower which I was pleased to manage. Refreshments were taken and the group split leaving Big Al, DannyP, Karl, Robin, JonH and myself to head WW way for some more fun. Loads of excellent trails, quick turns, sudden steep drops and awful off camber rooty sections followed by a monster climb. It was hell ;oP

BigAl then proceeded to blast into KOM on Summer Lightning and I set my best time for the first two sections. Not hard given that we hardly ever flow the two together but hey, who’s counting. (well yes, I am to be honest)

With the fun out of the way it was the usual way home via Ranmore pausing only to get our breath back and deride the use of porridge from sachets. Really people, read the side of a packet of Oats, it’s not rocket science. Good ride.

Filed under Rides in January 2012