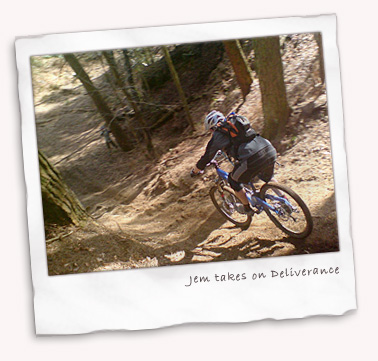 Well what a day for a ride. Fine spring weather, generally dry trails and a big group of us heading out to ride some great Singletrack round Leith Hill. How big? Well, the roll call at Bocketts included Colin, Jez, Jem, Tony, Dom, DaveW, Rob, Scott, Dave, Lee, JohnR and myself. And it’s possible I may have missed someone out, apologies if I have! Oh, and pictures of our Leith Hill ride are on Flickr.

So a real posse of riders left Bocketts at 8:30 sharp for a change, full of eager anticipation and perhaps with a little trepidation. You never know what a ride will bring but we knew we were heading for a longish ride over some pretty lumpy ground.

First we had to get there of course which meant keeping things simple if not easy as we headed up to Polesden and down through Yew Trees with our tyres kicking up plumes of dust on the wonderfully dry trails. With a group of 12 there’s always a few XC scamps who disappear into the distance on the climbs with the rest of us spinning along behind. I was spinning!

Up on Ranmore it was off onto Badger Run with the sun breaking through the bare trees and starting to warm us up noticeably, after which we turned downhill for the Land Rover Descent where I wasn’t alone in finding things faster than anticipated. My line choice was dubious and my Hope Minis where not really up to the task as I flew down.

Lee too flew down and seemed in two minds about stopping at the bottom. Dave on the other hand definitely wanted to stop. It’s just his bike had other ideas, having casually discarded a whole disc pad from his rear brakes on Badger Run and leaving him with limited stopping power for the rest of the day. But who needs rear brakes anyway, it’s amazing what you can ride with just a front brake. Fortunately it was to be the only mechanical we suffered the whole day. 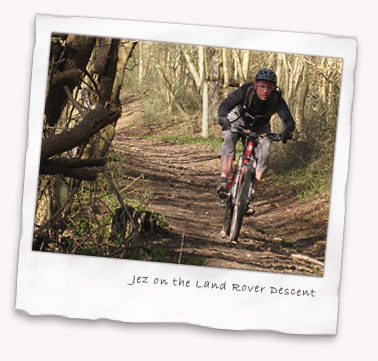 After safely navigating Land Rover it was over to Balchins Lane and up to the Rookery, shortly followed by the steppy climb up onto Wolvens. I dabbed a couple of times through a lack of traction but managed to pick a line up without too much trouble. With a bit of a breather at the top we pressed on up Wolvens, weaving in and out through the trees as our group of riders stretched our collective legs. We were just getting started.

With sun on our backs and an early start behind us it was time(?) to think about tea, all of us feeling we’d earned it. Before that though we had to reach the Tower which meant a nice roll through soft, loamy trails with the odd root or lump to bounce off. Conversation was flowing and it was great to dip in and out of various chats as riders either caught up with or left each other behind depending on which direction the trail was pointing. The usual slog up the steep side to the Tower found us more than ready for refreshment.

After a slice of fruit cake and a cup of coffee on board we headed off for the Quarry via as many twisty bits of singletrack we could find, but not before saying goodbye to Dom who was back off to Ranmore to meet his wife, a horse, a cup of tea and some ‘cherry bakewells’! Despite his claim that he really was going for a slice of cake it just seemed a bit too euphemistic for some of us and gives a whole new meaning to the phrase ‘put the kettle on dear…’ It was good to see Dom anyway!

Our increasingly dubious navigation eventually saw us reach the quarry via Weeping Willow (I think) and we amused ourselves for twenty minutes launching off some of the more modest jumps for the cameras. All good fun and highly addictive resulting in some obvious enlargement of the adrenalin glands later on. Then it was on to Chocolate Jesus before spitting out onto the road and heading up to Staveall car park for the climb back up to the Tower. 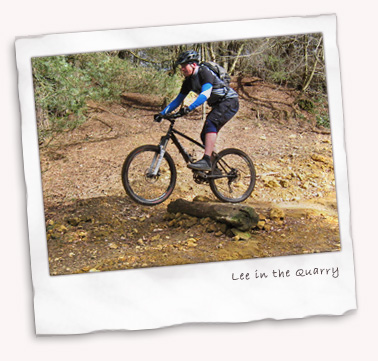 Our reward at the top was Personal Hygiene, a first for me as I’d never seen it before. It’s quite straightforward, being ‘just’ a huge roll in to a massive bombhole but it does mean you spend a lot of time looking straight at the ground before reaching a level surface again. Dave cashed in his brake chips by rolling down it and then down the steep run out on the other side while the rest of us took the no less steep but more open alternative route round.

By now we were starting to really hit the groove. We knew we were pretty much on the way back but we also knew we were up against the clock. A run down to the cricket ground led naturally to Deliverance. I had already decided I was going to go for it whatever happened, reasoning that a lack of vegetation, dry ground and limited dust was the perfect combination. It was my first time. 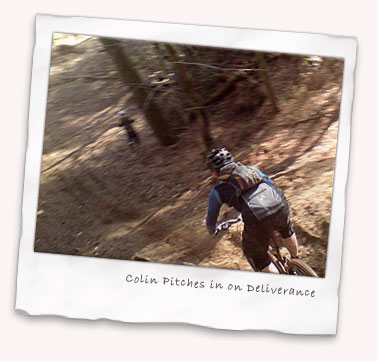 I’m grateful though that I wasn’t the only one trying it today and that DaveW took it on himself to go first, rolling through with a nice line and an ease that perhaps I may have lacked. Next Dave went over, followed by Karl(?) who we’d met moments before. Then it was my turn. I rolled down, feeling a bit rattled about on my four inch travel Inbred and determined not to try anything heroic like steering beyond the absolute necessary. But it was fine, I reached the bottom in one piece and still on my bike which was the aim.

Shortly after, Colin came hammering down on his new Pitch with little trouble but no less pleased with himself than I was, before Jem decided he too was up for it, riding it with the most grace of the lot. Very smooth. What an adrenalin rush that was though, I was pretty scared but held it all together. No time to stop though as we headed onto Waggledance followed by Summer Lightning. 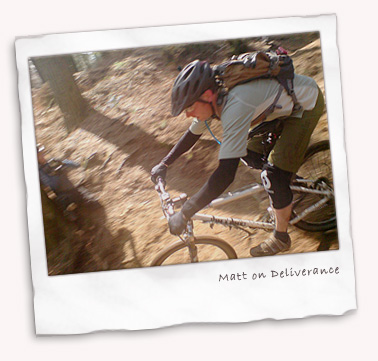 I haven’t ridden either of these trails for a long time, having dismissed them when they were new as a bit mickey mouse. In a way they still are, especially Summer Lightning which weaves back and forth in places but I was greatly impressed with how well they’ve bedded in and how they flow much better than I remember. Up front, great speed was in evidence and I could feel how hard I was working to really pump the trail.

Tony stacked it big time toward the half way point but unfortunately I missed it, just as he missed the tree that was apparantly quite dangerously close. It still left him with a mouthful of dirt and a nice impression from his glasses though.

By now we had the pace cranked up as we rolled on Wolvens Lane, darting in and out of the tress all the way down. I launched it nicely in a couple of places but was secretly in need of a breather as I became more and more ragged. At one point I hit a dip and both my hands seemed to lose grip and roll down and under the bars. I don’t know how I stayed on during my limp wristed moment but managed to pull myself back together for the run down to the Rookery Climb, throwing the Inbred off ever bigger drops in the process. I surprised myself.

But I was tired and starting to get carried away with my riding and losing the concentration needed to ride well. The Rookery Climb(Descent) nearly had me in serious trouble as I jumped off the first couple of steps only to realise I was going far too fast. The rest of the descent was a blurry visioned mess of steps and drops as I tried valiantly to hold things together but how I didn’t pinch flat I don’t know; it was a real style bypass. 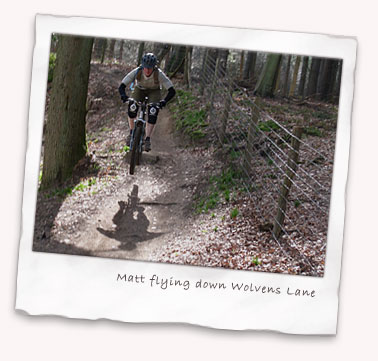 Still the ride wasn’t over though and we had a lot of riding left to do. Somewhat ambitiously we headed toward White Down which we inched up with me feeling every turn of my cranks before picking up Collarbone and Badger Run back to the Ranmore Road. I still feel twitchy passing the scene of my accident and increasingly realise how significantly-too-fast I was going. Today I went past at a reasonable pace but by no means at warp speed and felt much better for it.

Up on Ranmore the group split, some riders heading toward Denbies and the run back to Leatherhead or in DaveW’s case Epsom (serious mileage there Dave!) while Rob, Jez, Lee, JohnR and myself turned toward Yew Trees and the final inching climb up under the wooden bridge at Polesden.

By the time we parted near Crabtree Lane and I’d rolled down to my place I had a fully stamped 25 miles on the clock, which I knew without needing to check the computer. That was a seriously hard, but seriously good ride today.

Thanks for the turnout folks and sorry if I didn’t get to say goodbye to everyone today, I was struggling to keep track of everything that was going on. And see you all again soon I hope.