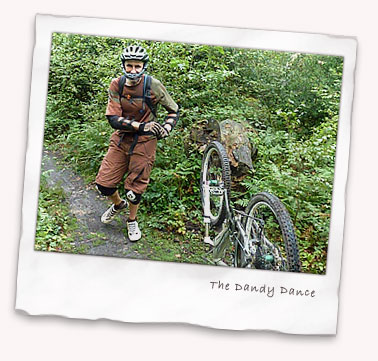 A mixed bag of a ride with some new riders and some old riders.

No matter how much we say we’re not a club and all riders take their own responsibility, the thought of injuries weighs heavily on me these days. I struggle to stand and watch riders engage with the more difficult drops and sections in case someone injures themselves. Alas, someone did again today.

D’Andy, JohnR, DaveW, Barrie, Colin, Jem, Paul901, Young Phil, (slightly older and definitely Irish) Philip, Simon aka DevonMole, StevenD, Ray and his mate Irfan joined me in the car park by 8:40am. We’d knocked around a few routes in the forum but came back to the old standard of Newlands Corner via Abba Zabba. A fair bit of rain had put a fine layer of slime over the trails with a little extra spread on the roots you didn’t hit at 90 degrees.

We headed off at a steady pace and I got chatting to Phil as we head up Admiral’s track. Simon did a great job sweeping up at the back, a position he was familiar with from the femole ride yesterday were he also did his motivation job on the new riders. With new riders and rain I issued the warning to keep speed in check as we ducked under the bridges to pick up Yew Trees. The riders spread out as we headed up to wait at the Ranmore Road. And we waited.

As the minutes ticked by I became more worried about the lack of Simon and Irfan but assumed it was a puncture. Then D’Andy headed back, then Barrie and then Ray to see what was up. Colin then called D’Andy who had come across a walker and explained that there were two cyclists both heading back to the car park and one was pretty badly cut up.

Irfan had apparently lost the bike going down him and cut his face, saved from worse by a helmet splitting open but absorbing the impact, and damaging his wrist (not sure how serious). So we were two men down and we’d only done a few miles. (Oh… D’Andy rode from Kingston again so he’d done a lot of miles!)

Realising that Simon was going to deal with the situation we headed on to Newlands via Badger Run and Collarbone, taking extra care to ensure the second trail didn’t own up to its name again this ride. As the rain hadn’t penetrated that deeply it left a nasty layer to slippery goo to contend with. Having shod the rear of Project Red in a Nobby Nic I was not totally impressed with its ability but to be fair I don’t think anyone found their tyres great in today’s conditions.

On to Abba Zabba via the log stack with Colin and D’Andy (2nd attempt) making it over in less that ideal conditions. This led D’Andy to do a little jig (see today’s ride photos on Flickr). 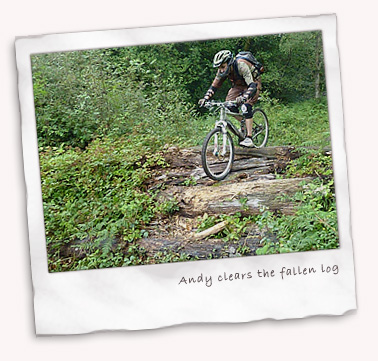 Abba Zabba was the next main attraction with Colin and DaveW clearing it before my bottle went and I moved on. Next for me was barrelling into Blind Terror (other side of the road) although a few other did the one directly after AZ. Just after this Colin departed while the rest of us headed over to Abinger Roughs and then to Abinger itself. Barrie peeled off here while the rest if us headed off behind Shere, and then to the infamous slog up to Newlands.

I hung back and encouraged Ray to push himself up the climb which he made and seemed very happy with his partially regained fitness. So much so he went of to head towards the Downs Link as we all headed back after refreshments! Good on ya Ray!

So, keeping it simple for the return we headed back on the level with JohnR breaking off with Paul901 to take the main Byway and then the road while the other of us took to the woodland to spice it up a bit. Popping out by the reservoir we picked up DevonMole again having returned from his Angel of mercy dash. Pleased that he got a few more miles in we did our normal route back along Collar Bone and Bagder run again, then retracing our steps down Yew Trees.

I hope Irfan is OK and that this hasn’t put him off. Simon though his tyres were too tarmac orientated for these conditions but I wish him a speedy recovery. Good to see Ray again and also new rider Phil, and 2nd return this year for Philip.

Hope I haven’t missed too much and I’ll let the other riders flesh out any details I missed with their comments.

Filed under Rides in August 2010