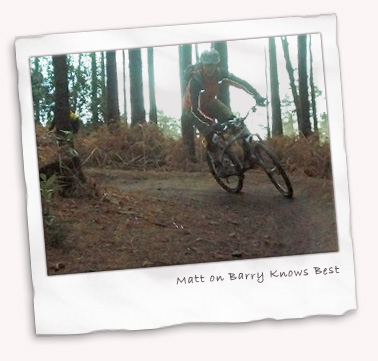 Let’s do the summary first. It seems GPS systems still have a way to go. And you can see pictures of our Holmbury and Pitch Hill ride on Flickr.

Relying almost entirely on the GPS (both Dave and Lee had the route loaded to theirs), we had the fallback of Lee and myself and our hazy memory of what trail is where. Unfortunately, it wasn’t enough and was a reminder that it’s all very well following someone around these parts but if you’re just in Lemming mode and not paying attention on the bits in between, it’s not enough.

But that wasn’t to say it was a bad ride. In fact, we had a blast thanks to Toby stepping in and linking up a few trails. We still covered Reservoir Dogs (frustratingly missing Surfa Rosa on the climb up), Barry Knows Best, Christmas Pud, Two Headed Dog and plenty of others. It’s just it wasn’t quite in the order we planned.

Barrys was wet and slippery after last night’s rain, a foretaste of the peaty mess in parts of Pitch. We wandered around on Pitch for a bit trying to decipher the GPS but struggled even to decide if we were following it in the right direction. Shameful really!

But once we got past the Quarry and into the meat of things (thanks to some advice from riders we met) we started to find the kinds of trails we were looking for and grabbed plenty of photos along the way thanks to Lee’s camera. Things started to improve after the long roll in near one of the car parks, then we headed over to Two Headed Dog and dared ourselves down it. It was the right thing to do as it proved pretty straightforward although we took the easier of the two options.

Next it was on through Winterfold, by then we’d thoroughly abandoned the GPS idea, deciding you need the technology plus some local knowledge to get the best out of it. Probably it would have served as a useful reminder for the various trails in that circumstance.

Toby started to take us down some cheeky little trails which we may possibly be able to find again – who knows?! There was the odd tumble, and I had a good few near tumbles, at one point I was left clutching a silver birch looking down a fifteen foot drop and thinking about letting the bike go. Lee was close behind about to lunge for my Camelbak but I managed to stop myself and claw my way back onto the trail. 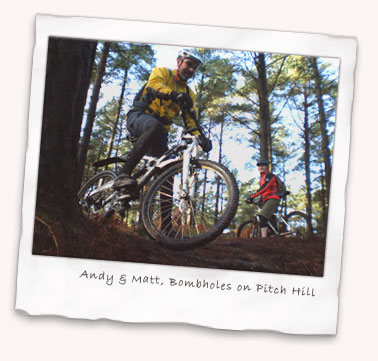 We visited the Bombholes, they were a bit gloopy at the bottom, not too bad but enough to slow you down and give the bike a wobble so that it was hard to keep momentum through them. With some of us never having seen them before it was a good chance for a playaround, then it was off through the trees again.

After some more trails that were new to me, Christmas Pud came and went with a sense of disappointment as the trails were pretty wet and it was hard to find a rythmn. I bottled ClawHammer, coming up on the jump too close behind Jem which distracted me somewhat. After a bit we entered what I call the Ewok run through the trees with the pine needle carpet but Toby led us off down a tricky switchback section that was a real tester. My classic Inbred was starting to feel a bit XC for me with old Hope Minis and just 100mm of travel up front but it didn’t let me down.

By now I had no idea where we were but we certainly weren’t in Kansas anymore. More trails came and went interspersed with sharp climbs before eventually we arrived back at Peaslake via a tramp past Lockhurstlatch Farm and a massive house with an equally massive clock in the garden! That got my guilt gland seeping as I saw the time and realised it couldn’t possibly be only 11:00! 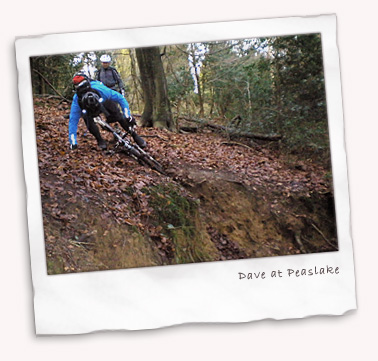 Up above Car Park No.2 near Peaslake on the Walking Bottom side we dallied with the idea of rolling down the huge drop into the car park, Andy successfully did it but Dave took three increasingly twitchy attempts before we all quietly decided to just roll down the road. Highly amusing and Dave certainly got close to going over the edge, just not with his bike under him. Too wet and slippery for his liking or for him to line up his approach sufficiently.

By now my guilt gland was twitching big time, so leaving the others to enjoy cheese straws and tea at the Peaslake Stores, Lee and I pressed ahead. We made short work of Radnor Road and kept the pace up all the way to the lookout with legs and lungs burning before picking up Yoghurt Pots for the start of our return to the car park.

My legs were truly exhausted down Yoghurt Pots but we made it all the way in one go. The top section seems to be bedding in nicely but other parts seem to be showing wear. Finally we came out the end and picked up Telegraph Road for the final run.

Even here it was hard going and we were huffing and puffing along. Considering Head for the Hills had their demo day today I didn’t see as many riders as I was expecting although I’m sure I passed a couple of Gary Fisher Roscoes on one of the climbs on the Holmbury side – they couldn’t have come from anywhere else? Anyway, we enjoyed a quiet and unimpeded run back down Telegraph, the final steppy section saw us upping the pace again before we dived through the trees and eventually finished the ride with the tricky switchback and steep run into the car park.

So overall, another great ride. 15 miles in that kind of terrain is pretty decent, the fitness levels are coming back all the time judging by how I didn’t crash out this afternoon (thank-you, my cappuccino maker!) and even though it was looking dodgy at points in the ride it all came together in the end.

Thanks to Toby for his steerage, I hope everyone managed to get back safely after we left them. It’s certainly made me realise I need to familiarise myself much more with the trails over Pitch way, it’s not that I don’t know them I just have spent too much time relying on mates. Now I’m starting to get an idea of the terrain and with Colin and Toby’s help it should improve.

We’ll be over again soon I’m sure.