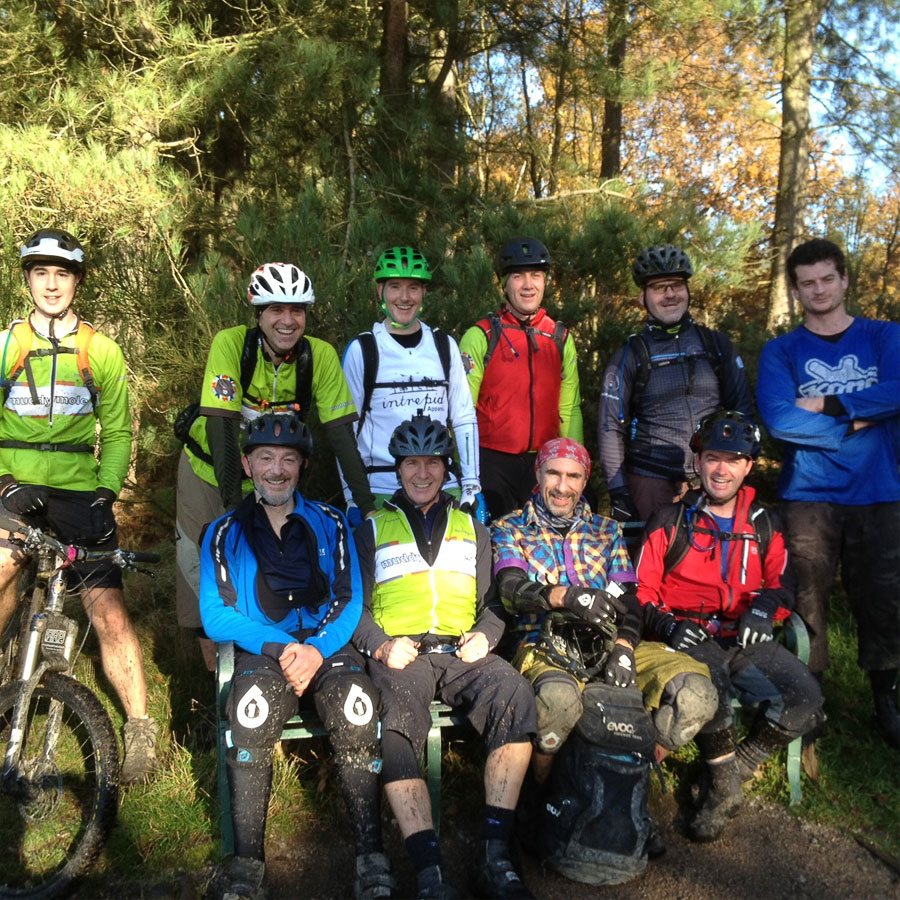 It might sound hard to believe but I haven’t been to Swinley in over 18 months. The subject came up on the way back from Wales and after finding out that Yoghurt Pots was going to be closed for maintenance at Holmbury, a plan was swiftly hatched.

This was helped no end by DaveC wanting to try out his new tow bar mounted bike rack. Despite the comedy looks of a tow bar rack on such as small car (we wondered if it would tip up at the back), the plan was to take Kevin and me with three bikes on the back.

It didn’t quite work out like that. First time teething troubles trying to find the optimum arrangement of three full sus machines meant Kevin ended up driving himself anyway (sorry Kev!) but eventually we made it to the Lookout car park where we were joined by JohnR, Al, JonH, Mike, Dandy, Andrew and Lloyd, making ten in total. After a bit of pre-ride faffing, we were off.

Dave’s plan was to try riding the Labyrinth/Deerstalker complex early in the ride when we had some energy and to try a few runs up and down. So we headed over, with the first mile or so revealing the trails were holding up well despite a few sloppy roots. Such a contrast to the Welsh slate of last week but with a low sun struggling to clear the trees and the tail end of a bit of frost it soon got us warmed up.

Passing the denuded jump gulley proved too much of a temptation for a couple of swift run but I could have done without coming I unclipped on the first tabletop proving my poor technique. I redeemed myself with clearing the double at the end, then we regrouped and headed onward.

Reaching the top of the Deerstalker complex showed the place was slowly filling up with riders massing. We headed off on the easier run, Deerstalker, and were soon carving our way down the trail, my recent Llandegla experience helping me no end. At the intersection we took the quick exit and then hauled our way back up the hill for another run.

Our group started to split up, with different people taking in different runs. I followed ‘fingerless’ Kev down Deerstalker, probably too close for his comfort, then the next run was my chance to follow Dave down Deerstalker 2. This proved a bit of a challenge on the gulley at the top which was buried under a mass of dead leaves but you just needed to let the bike run.

After another enjoyable run I returned to Deerstalker again although I’m not sure I rode it any better for sessioning it. My final run was Babymaker, following Dandy’s exuberant efforts over the tabletops and even managing to get one just right. Such a great feeling, Babymaker still makes me laugh for the time an over-enthusiastic Colin stuffed his saddle rails on an unfortunate landing.

With tiredness setting in we finished the complex via Labyrinth which I attacked as much as my tiring lungs allowed, finally carving the last turn too hard and finding myself in a gloppy morass blocked by a tree, something I think had been done by plenty of other riders before me.

Once we’d regrouped we headed off to the other side of the woods with Stickler our target, reached via Seagull. The lack of one-way running means you have to keep alert for riders coming the other way on all these trails.

It was my first experience of the new, extended Stickler complex and what an exhausting trail it is. Loads and loads of berms. If you want berms, this is the place to come. Big berms, small berms, berms filled with water, tight berms, open berms, slow berms, fast berms. Berms!

To be honest, while it’s a great warm up early in a ride and a good place to hone your skills – and let’s face we all need to practice riding berms – I can’t say I cared for it greatly. Maybe it’s just too long, maybe it’s the very artificial feeling nature of the man-made surface, maybe it’s the fact it’s hard to find a flow, but for me it was a bit underwhelming. Maybe it just needs some gradient to it?

Crossing over to Tank Traps it was more of the same really. I just found the surface (made of concrete-grade aggregate) too bumpy, too tight with too little grip to really enjoy. Don’t get me wrong, I was having fun for sure but I felt things weren’t gelling for me compared to the loamy surfaces on Deerstalker. It might just be that I had been spoiled riding Wales last weekend.

We finished the ride with a run down Corkscrew before heading back to a very busy Lookout for the obligatory tea and cake. Eccles cake, since you ask and very welcome it was too.

Overall, that made a great change to our normal riding on the Surrey Hills.

Filed under Rides in November 2012