It was sunny but surprising chilly as we gathered in Hurtwood Control No2 Car Park for the mornings ride but then I do have to keep reminding myself it is only April! 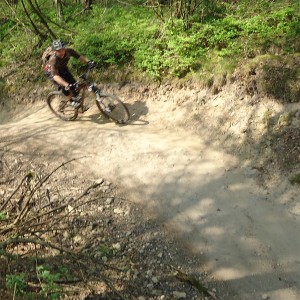 BigAl had kindly offered to string a route together for us today and the ride started with JamesS, DaveW, Carl, Leona, Jem, MarkW, Elliot (LordOnOne) and myself. I was feeling surprisingly tired as I started to struggle on the first climb up towards T1 (I think, naming not good round Pitch!) but conditions were great with plenty of grip and later too much dust!

T1 gave us a great opening to what the riding was going to be like and it popped out in just the right place to allow us to take in Death Star uncharacteristically early for a Mole ride. I love it. Rocks, drops and just the edge of control and speed that I like.

Possibly a harsh intro to Carl and Leona but due warnings were issued and everyone assembled at the bottom still able to ride.

Then the climbs start in earnest as we did the climb up from Barry’s to get to Holmbury Hill proper. Here it actually gets a bit hazy for me trying to remember the order we rode trails in. Some of this was BigAl’s excellent way of stringing routes together with minimal fire road use.

We headed over to RR just to check the extent of it’s removal and can confirm that it’s well gone. No more trail building of this nature is going to be allowed. It’s a shame, given the amount of work put in, but does illustrate that there needs to be dialogue with all parties to try and get some sustainable future for trails in this area.

In no particular order we did Yoghurt Pots, Secret Squirrel and Deer Stalker (without me getting chucked off) as well as the fire road crossing without me coming off. All in all a crash free ride for me! Always a bonus. I think Carl too the crown for offs today but in his words, “It’s OK, I’m getting good at coming off”.

The final run from Holmbury took in BKB and I got a bit of video footage by the first main berm. Conditions were fast and furious although I gave anything with a stump in it a wide berth after last weeks accident.

All down safely we headed to the store for refreshments and met up with JohnR as arranged. In addition Paul901 appeared in the store having ridden over on the road.

It was a great opportunity to hear from the new riders and sit in the sun discussing the rides, kit and technique. Before long though it was time to press on with the second half of the ride and time to say “Goodbye” to Jem who decided not to push himself too hard and head home. Well, that’s what we thought but he actually turned around and did BKB again!

So, ride Part Two included a run up towards the trig point on Pitch Hill with BigAl testing his chain to the limits and gracefully falling sideways with nothing to pedal against. A good opportunity to slowly take some more of the hill in and get ready for the ”new” descent he took us down.

This reminded me of Man Friday towards Redlands as it was the same sort of loamy soil but with a quite a few turns involved. An excellent trail but quite a big roll in at the bottom which is approached via a tight turn. This I bottled out on but Mark, BigAl and DaveW took it all in their stride. One to be visited again.

A quick blast towards the Windmill where we took in Two Headed Dog and headed over to Winterfold where we rode the Switchbacks via the bomb holes (vimeo). Only the second time I’ve done these and I felt it went a bit ragged as MarkW push me from behind but I got to the end without dabbing so I guess you call that successful!

At this point I think Leona felt we’d pushed her a bit far but it is a very demanding trail in my opinion. From there the trails were just swoopy as we took in Matt’s favourite Ladies Legs, Ewoks and then headed for the car park.

Pleasantly tired with some 17 miles on the clock, which never quite feels enough compared to some of our other routes but it does include 2250ft of climbing. 1700 calories also. Good to see Leona and Carl, also good to actually get out and ride with LordOnOne.