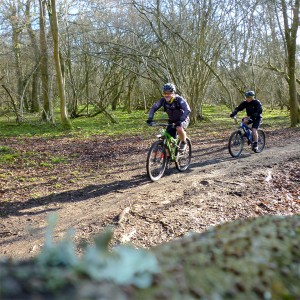 Having finally worked out the best way to bleed Avid Elixir brakes (clue: be patient and logical), I was keen to try out my Orange Five this weekend on to see if my DIY skills were up to scratch. The bike is now (unbelievably) five years old but still looks the part after being sensibly upgraded over the years.

It’s due for some more TLC soon. The drivetrain is showing signs of wear so that most difficult of purchases is looming – replacing the cassette, chain and chainrings. These days it’s an expensive business which alas goes largely unnoticed by fellow riders even if you have the satisfaction of reliable gearchanges. For now I’ll just have to concentrate on how it looks by keeping it clean and shiny, something which prompted several riders today to comment on the bike as if seeing it for the first time. For such a common bike on the Surrey Hills that’s good enough for me.

The ride originally was mooted to be a run over to Peaslake, something I had my doubts over but I was happy to give it a go as I could always bail out early if necessary. Saturday’s rain didn’t seem to put too many people off as I met Big Al, DaveC, DaveS, Dom, Andrew, DannyP, Matt, Elliott, Dandy, PaulM, and Karl at the Bockett’s Farm car park. Not a bad turnout considering Keith, Tony and Gordon were off tramping the tarmac in a fit of over-enthusiasm.

We set off up toward Polesdon at a leisurely pace with some incident at the back causing a brief split of the pack (no idea what as I was chatting to PaulM at the time). With that, a puncture on Yew Trees for one of our riders, plus a Dandy who is visibly struggling with PVFS we made slow progress up to Ranmore.

Eventually we all got onto to Badger Run and then Collarbone, this time slowed up by the greasy surface as the trails seem to have turned soft just as Spring starts to make an appearance. It meant slippery progress on the Ranmore side at least. Even so, the bluebells are starting to shoot and in the woods up near the Reservoir the woodland has turned distinctly green.

Al had a plan to take the Killer Climb down toward Raikes Lane rather than the Abba Zabba complex for a change but as we continued to make slow (but arduous) progress along the North Downs way we started thinking of alternatives. Dandy had already made up his mind, opting for a gentle run along the ridge to Newlands Corner but the rest of us decided to drop down and loop round to meet him there via parts of our classic Newlands route. 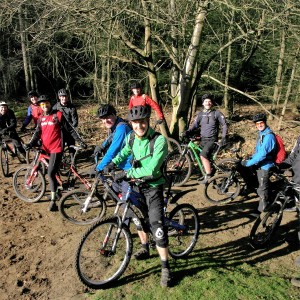 We headed off down the Killer Climb, determined to head straight on to the railway rather than turn left for Raikes Lane. It’s a long, long descent, much easier than I anticipated (being less unpredictable to the White Down descent) but with potential for getting things wrong as there’s a couple of places which lull you into carrying too much speed into a tightening turn, or that are obscured by the odd low branch. Good fun to try something different though.

We crossed the railway at Hackhurst Farm and were soon making our way through Abinger, then on to our classic Newlands route at a steady pace through Shere and on to Albury. The sun was out, it was reasonably warm, it was dry, what more could you want?

All too soon the Water Lane climb to Newlands loomed. I was happy to settle into my own pace as Danny disappeared in front of me while I concentrated on the runner thirty yards in front of me. There was no chance I was going to catch her up but the incentive still meant I managed my best times up this climb so she must have helped! I ended up finishing around 25 seconds off Danny’s time which was reasonable for me.

We met Dandy as intended, he already had his refueling operation underway (or at least on order) and the usual chat flowed. While we were there Tony (no, not TonyG) came up and said hello, we haven’t seen him for a while but it sounds like he’s been getting some regular miles in.

After that it was time to head back along a busy North Downs Way which is a long, steady non-technical grind toward Dorking. Along the way we managed to dodge (and greet) a huge group of ramblers who seemed to have decided on safety in numbers. We also managed to get five or six of us into the concrete bowl up on Combe Lane before we all got dizzy but overall the route back is a time to chat as the miles rack up.

The last few miles were a retrace of out slither and slide across Ranmore, all good fun trying to find grip in the greasy clay at relatively low speeds. This continued pretty much all the way back to the Ranmore Road via Trouble in Paradise, Collarbone and Badger Run.

At Ranmore Paul and Dandy headed off toward And Then There Were Three while we headed back into Bookham, riding is synchronised slow motion up the Bridge Climb at Polesdon past more walkers.

The round trip was around 24 miles from the car park and while it was a little disappointing not to make Hombury or Peaslake it was pretty much a great day to be out on the hills. This week is warming up so we might get some more decent riding unless, of course, it rains! I’m looking forward to Spring.