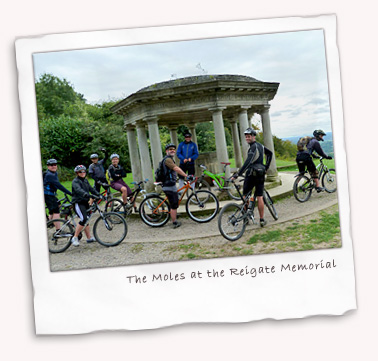 With D2D beckoning it’s a brave new rider who joins the Moles for a ride this time of year.

3 brave new souls (lambs to the slaughter?) were present when I arrived at he car park this morning. I eyed the retro Spesh FSR with some concern as I set about trying to work out what level of fitness we were dealing with. Lewis was the proud owner of said Spesh and he’d got experience although some time ago while his sister Emma, does the odd triathlon and some road riding. Mike had been over to Holmbury a few times so after a warning that the Moles were in pursuit mode (although later Amanda cut me down by telling me she was “idling”) we got ready to head off.

Riders were Mike, Lewis, Emma, Amanda, Darren, Paul901, PaulM, JohnR, Jem, Erick and myself. As suggested on the forum we headed over to Reigate Hill with a fast XC ride in mind. I warned the newbies that the Alsation climb was a killer and we headed down to cross the road. The killer actually came in the form of some barbed wire that took out Amanda’s rear tubeless tyre and also a bit further on Lewis’s as well. So, with a tube from me we got that sorted asap and cracked on. 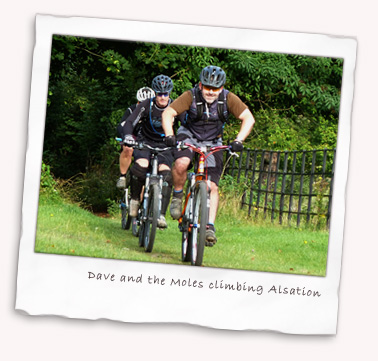 I adopted the “no one will pass” tactic up Alsation after JohnR passed me on his SS and I’m sure the new riders had their own thoughts on that particular climb! We took in Life on Mars on the way, a track that, for me at least, offers different joys depending on which direction you ride it. Onwards to Headley Heath, passing Ali’s Cafe and heading through the bridleway network to the top of Pebblecombe Hill.

Paul901 was having a good ride as he cleared the “side of the field” climb ahead of me and continued to set a steady pace for the rest of the ride, looking especially strong up the Gatton Park climb. I also want to thank Darren, Jem and JohnR for looking after the back of the pack. I did briefly have a go myself only to realise that I was the only one with a real nose of the direction so that soon stopped!!

So, we did the Gatton Park loop with Emma commenting that she nearly went over the bars on the chalky descent but made up for it with a fine climbing effort. We passed the cafe without stopping given our previous experience of the pricing, instead opting to take in the hospitality of Ali’s Cafe. The run back was uneventful although a few golfers did wait until we passed before teeing off, a fact I am grateful for!

The Cafe offered the normal delights with Darren and Amanda opting for the bacon and egg roll. Good basic food with no pretence of grandeur!! Nice.

The final run was now upon us as JohnR led into SS with 4 or 5 following only to miss the sharp right hander putting me ahead for the rest of the trail. This was soon followed by LoM in reverse (or some would say the forward way) and a final run back down Alsation.

Back at the car park the new riders seemed to have enjoyed themselves and hope to see them again soon.

Filed under Rides in September 2010