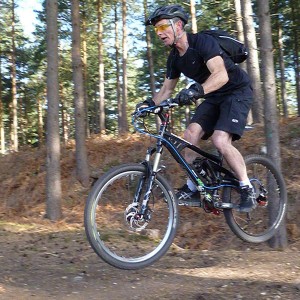 On a slightly cloudy and cold morning a few of us headed over to Swinley with high hopes of a sunny, dry ride. We were not let down!

The count at the beginning of the ride was 11 with Tony, Jem, PaulM, JohnR, Jason, (new)Paul, Andrew, Stu, JamesS, Karl and myself. A few old names and a few new ones in amongst that lot.

I was sort of leading and took my normal route heading over to do Stickler first, followed by a trip to the Tank Traps.

Here’s a short video of following Karl down the last gully for a second time;

Moles in Tank Traps from muddymoles on Vimeo

From there we headed towards Crowthorne and took Seagull trail on the way to the Corkscrew.

Here’s a short video of me following Jem through the Corkscrew;

Moles in Corkscrew from muddymoles on Vimeo

After that we pretty much headed back the way we came and tookin Tank Traps once more before hitting the Jump Gully for maxing out the phat air, innit. Well…..I passed by without looking as I hate the site of blood.

We headed up to the top of Surrey Hill and took in one of the woodland trails but I exited too early and we missed the run to the ski-jump but headed up to the top anyway for a quick run down. Here we had out first and only casualty as (new)Paul took a tumble going down, breaking a brake lever and pringling his front wheel. Not too much blood! We said “goodbye” to Jason and Paul and they headed back to the lookout. The 9 of us headed towards the Labyrinth area.

Here’s a video of me following Jem down Deerstalker;

Moles in Deerstalker from muddymoles on Vimeo

We did a few more runs including Labyrinth itself and then headed back to the lookout via some other trails I know, taking in Stickler one more time.

It was an excellent ride with everyone enjoying the dry trails and pushing themselves a little on the varied trails.