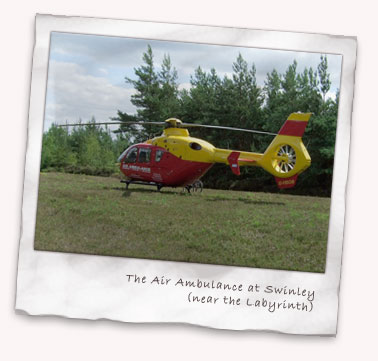 It all started so well. Sunny skies after days of rain, 16 riders and Swinley singletrack to play in.

You can see where this is going can’t you?

Well, actually, although we were responsible for bringing out the Air Ambulance, it wasn’t required. Near the end of the morning session Tony was unlucky enough to get caught out by the big drop off at the end of the Labyrinth and broke his collarbone. That was almost immediately after our very own Stig had taco-ed his wheel on his Specialized Pitch and broke a rib in the process. It was one of those rides…

But back to the beginning. Swinley, sun and sixteen riders, including three new-to-us riders. Here goes, ‘Stig’ (you know who you are), DaveC, Keith, Jez, Jem, DaveW, Barrie, waterproof Paul, Lee, James, Paul (DaveW’s mate?), Ian, Philip, Tony plus another who’s name I forget (I’m hopeless, apologies!) and myself left the Look Out car park on the look out for some sweet singletrack.

It wasn’t long before the large group were stretched out along the trail, contending with quite a bit of vegetation that narrowed the tracks considerably. We climbed up and were soon into the decent stuff, starting with a little hoppy jump that I cleared fine and then picking up Stickler (with the wooden bridge near the end) trail which was a nice warm up. Despite all the recent rain the surface was dry and grippy but things were very humid. Wisely, Paul had left his waterproof at home.

After that we did Tank Traps with a few of us circling round for a second go. I just couldn’t seem to find the right line, nearly over-cooking it a couple of times as I steered too fast round the sweeping banks and found my weight completely in the wrong position. I’ve been down these runs feeling great but today was a halting affair for me.

As it was for the rest of us in the sense that 16 riders take some organising! We kept stopping and making sure everyone was with us and managed not to lose anyone thanks to DaveC’s sheperding. I just sat in the group and followed everyone else!

After Tank Traps we went somewhere else. Then, somewhere else after that. I know Seagull was involved at one point and plenty of other trails too, with the Corkscrew being a bit of a highlight. Once again, my line was wayward, in fact at one point completely wrong and off-piste but it’s a fun play area. Barrie managed to photograph me looking semi-pro, how he did it I do not know but he is in the creative industries. 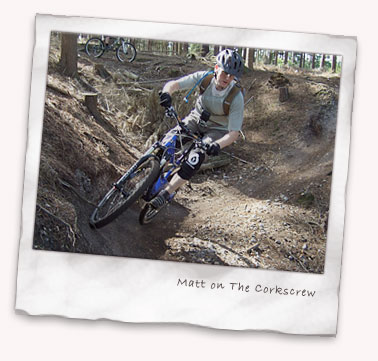 More jumping was on the menu in the bombhole area with DaveC catching plenty of photos while I kept my riding consistent by trying to jump over things with my weight in the wrong place. More than once today I got away with it.

Moving on, we reached the jump gulley area where we watched one guy stack comprehensively off the side of the gulley, proving his full-face investment was the right one. We bumped into him later and he was fine but I class him as rather fortunate too!

My bumbling attempts down the gulley did at least result in me clearing the double at the end a couple of times, once with the back wheel landing just on the apex of the second hump and once when I got it spot on. Speed is your friend.

By now lunchtime was approaching. We said goodbye to Keith who was suffering a bit with his knee and also to Paul? (not sure) who had commitments back in the real world. The rest of us headed toward the Labyrinth.

At the top the leading pack hared away with Tony and Jem up front leading the group round the floaty, ashy berms at the top before disappearing down the trail at a rate of knots. The rest of us followed in our own fashion only to come across a badly shaken Stig pretty soon after who somehow had got some air off a kicker and ploughed heavily into the ground.

Five inches of front travel disappeared in no time, only to be suplemented by a deforming wheel which ended it’s life taco-d beyond use. Barrie forced it back into a semblance of round but it’s safe to say the rim has reached the end of it’s useful life. Stig was very lucky not to have addressed any of the trees with a random part of his body; nonetheless, clearly shaken and bloody he retired hurt. As it transpired later, with a broken rib for his efforts. Ouch, but a narrow escape.

But more was to come. Tony had disappeared off down the trail and after a brief discussion at the crossroads I followed with DaveC behind. By the time I’d reached the end of the Labyrinth I found Tony’s bike lying on the ground and Tony standing slightly away from it with a pale look on his face and craddling his right forearm. After a moment I could see more ashy dust down the right side of his face too and asked if he was OK.

It turned out that Tony’s riding mojo, which had every last drop wrung from it as he blasted down the trail had deserted him just when it was needed. A swift over-the-bars episode ended with Tony nursing a broken collarbone. It looked painful and probably isn’t the first injury suffered at that spot. The abrupt run out really is out of keeping with the rest of the trail and could do with some redesign work I feel.

An increasingly wibbly Tony was fortunately attended to by a female mountain biker (leave it Lee!) who turned out to be a very competent first-aider. Several other riders with other groups also offered assistance which we’re very grateful for but Tony was soon needing to sit down, and then lie down as shock, sugar dips and the pain kicked in.

Meanwhile, the rest of the group set about organising an ambulance. This is not as easy as it sounds and causes confusion since Swinley seems to be on the Surrey/Berkshire borders. The emergency service can’t accept GPS data to locate you so when you’re stuck in the woods it becomes difficult to explain where you are.

Eventually, with the help of a local rider a group set off to rendezvous with the paramedic who excelled himself with a 13 minute forced march to get to Tony with a heavy back pack. It helps if you’re an ex-squaddie but hats off to him! Another local group (headed by Simon who co-incidentally had showed us round on our first Swinley visit) also got in touch with the Swinley Ranger.

It seems the correct form at Swinley, which isn’t necessarily obvious, is to contact the Ranger who will then co-ordinate the emergency services to avoid the confusion over whether it’s Surrey or Berkshire services that attend. Meanwhile, much to Tony’s embarrassment, an Air Ambulance arrived and set down at the top of the Labyrinth. It wasn’t needed, which frankly was good news. 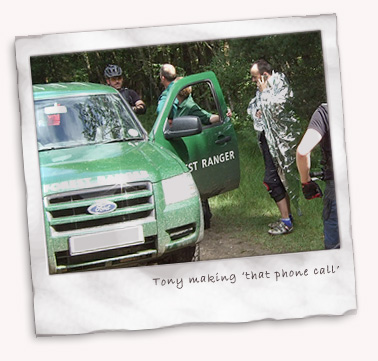 Tony, although in pain, was in the walking wounded category as I was when I managed the same thing last year. The helicopter looked like fun but I wouldn’t want to properly need it and I don’t suppose anyone else would either. Tony, after making ‘the call’ to Debs, was driven by the Ranger to the normal Ambulance which had parked up several minutes drive away, after which the Ranger met us at the Go-Ape area with Tony’s bike. She was great and her help is hugely appreciated.

So really, that was game over with the time having ticked by quite a bit during all that. We had a bite to eat in the Cafe, then it was time to return home with me driving Tony’s car. Fortunately he didn’t keep his keys in his right hand pocket which saved someone the unwanted task of rummaging for them!

Tony was later confirmed with a broken collarbone after an X-ray at Frimley hospital. Get well soon Tony, hopefully you’ll be back with us sooner than you think. Apologies to all whose name I’ve mistakenly garbled but it’s a bit late for me this evening, and thanks hugely for everyone who took the trouble to stop and assist today.