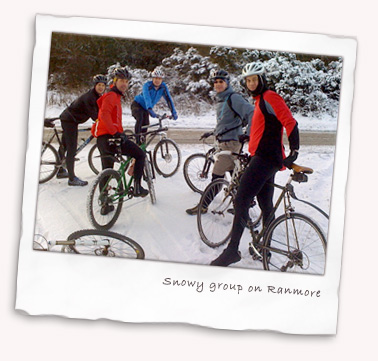 Leaving my house in Ashtead on Sunday morning, quite happy to have exchanged rain for snow, after 5 minutes riding the hands were cold and my face, which was the only bit of skin exposed to the elements was numb. I put in a quick blast along to Leatherhead to warm me up on the way to Bocketts on my new On-One singlespeed.

On arriving at the car park, I thought there would be quite a few out, however only James and Erick were there searching for other company to arrive, Jez was there but had only to catch Matt for something, so he quickly disappeared back in the car and away home. With the cold weather and being the Sunday before Christmas, we think it may have been difficult for people to get out.

So James, Erick and myself were left looking at each other thinking blimey we don’t have the usual suspects to guide us through the myriad of tracks, after a few gulps, a quick decision was made to keep it short and head for Box Hill, where we could get a cup of tea and some cake.

We headed up Admirals track tentatively as the gully up there was still slippery, and caught up with 3 guys at Polesden. One of them was Tim, who had been emailing or chatting to Matt about coming out with the Moles at some point. Now talk about retro, he was on a late eighties or early nineties Gazelle road bike with ‘cross tyres, very brave! We headed up Yew Trees together which was just stunning with the snow up there, very winter wonder land.

It was the usual stop at the top to all gather together, Tim and his friends were heading over to Leith Hill and we turned left on to the road, which was still covered in snow and by the look of it, not many vehicles has ventured up this was way, so after turning off the hard packed snow covered road, we decided to pick up the North Downs Way and head toward Denbies, the run along the valley side was again amazing, with a blanket of snow covering the views below.

After leaving the twisty track we veered off left instead of dropping through the winery, where we picked up the tarmac, I followed Erick and James down there, which was frightenly quick, however I noticed their back wheels twitching and thought is this like black ice, sure enough we got down to the gate in one piece and we took a sigh of relief, as it was not just the 3 back tyres that were twitching…!, then a very slow roll up to the main road and Erick went down with a clatter, nothing you could do except James I rolled to a stop rather than braking and coming down the same as Erick.

Fortunately it was just a quick dust off, check the bike which was ok and off we went, however the cycle path running alongside the A24 was just one long sheet of ice, so we took to the very small grassy side and gingerly edged our way along to the bottom of Box Hill, with a quick comment from James wondering if there would be any motor bikes in the car park, a quick look left and not one (softies!). We started the climb to Box Hill, it’s been a while since I climbed it and it was straight in to the grinding, out of the saddle as a result of the singlespeed, but half way the arms were tired and then it was a case of hang on till the site of the car park came in to view.

The only break in the monotonous climb was looking to the right and seeing a small girl flying down on her sledge and her father saying “that looks like hard work!” Thankful for getting to the car park, soon James then shortly after Erick arrived then straight to the cafe for tea and cake. The only other people around were 6 other mountain bikers, who were in a very festive mood, they told us they were from Tadworth and were intrigued by the On-Ones, as 2 out of 3 of us were erm! on one! Anyway after a quick chat they were off.

We finished our tea, a few photo’s of us in the snow, a quick tighten of the headset and we were off again, deciding to go over and try and find China Pig, but the area looked very different in the snow. We were back and forth trying to find the run down and soon we ended up riding something very different, we ended up picking our bikes over the sty of an electric fence (a few thoughts of, should we touch it to get warmed up! but sense prevailed). A short distance over this snow covered field, then came a wide open long decent of hard packed snow, we flew down, like 3 speedway racers with a nice lock up of the rear wheels towards the bottom. We all looked at each other and thought blimey that was fantastic and were glad we got temporarily lost, so we could stumble across it.

We jumped on to the tarmac again and headed towards Alsatian, a quick blast down till we got to Stane Street, where I was turning off. A quick chat and a quick exchange of festive “all the bests” etc., then James and Erick carried on down and headed back towards Bocketts. I went back to Ashtead along Stane Street, which was the most lethal part of the ride. The ground was still rock hard but with tracks left from Landrovers at various points, once you were in a track trying to get out was very tricky so I had a few stumbles and trips before reaching Ashtead. I arrived home at 11.30, not a great distance covered but certainly very enjoyable and I found the new bike great, with only minor changes needed to the riding position for next time.

Filed under Rides in December 2009