A group of 7 (AndyW, me, Geoff, Dom, Peter, Pennie, Dave) gathered in Car Park No. 9 for a bright ‘n early start at 8am. Family commitments meant that most were aiming for a 3 hour ride so that all could be back home by mid-day.

I was especially keen to try out my new, longer-travel (150mm), Pace RC506. Thinking that Holmbury’s singletrack would be an ideal first ride, I was pleased to see Andy posting this ride on the Moles’ site, and interested to see what new trails I might discover! 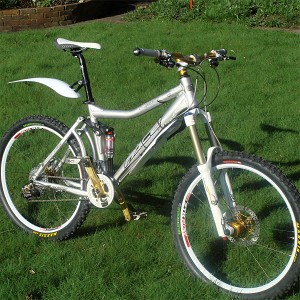 The new Pace (I’ve been riding the RC405 – the little brother with ‘only’ 130mm of travel – for just over a year now) was bought because I couldn’t resist a bargain, and I really like the way the Pace suspension lay-out allows the bike to climb like a hardtail but with all the grip of a full-sus. With a 170mm RockShox Lyrik Solo Air fork, I see this as my ideal bike for future Alps trips (plus Cwmcarn DH, Snowdon, Lake District, etc.).

We set off fairly promptly, and in messing about with seatpost heights (the ‘uppy-downy’ post has yet to be fitted), I forgot to start the SatNav recording. I’ve been struggling with my new SatMap GPS unit. Mainly because I can’t read what the Menus say when I have my contact lenses in for riding. I really need to buy some reading glasses for mtb’ing; otherwise I end up in situations like last summer, when I had to remove one lens and chuck it away so that I could see how to repair my seized chain and mangled granny ring.

From the car park we headed up, before hanging a sharp right (where I remembered to start the SatNav) to cross the Telegraph Trail before bearing left up the hill again. A short single track to the green bench at the Fiveways junction saw us head up Holmbury Hill again before tackling ‘Doc at the Radar Station / Petit Filous’ (or whatever you want to call it!).

At this point I misjudged the width of my new 720mm RaceFace Atlas AM bars, clipped a branch, then headed down the slope sideways. No great harm done, so I thought, though later I discovered I’d managed to knock one of the control buttons off my SatMap (doh!).

Back up hill again for the main car park and ‘Surfer Rosa’. A few little extra tracks took us to some new trails which took us back to the pond that’s fairly near to the Youth Hostel.

Unfortunately, it was on this trail that one of my chainring bolts worked loose. I was unable to pedal as it was rubbing hard against my chain guide. Luckily for me, Andy & Dave knew their way around the RaceFace crank set up, and a quick removal of the drive side arm gave us enough gap to tighten up all the bolts (eek !). Having paused to reposition and tighten up the seatclamp bolt, I spent the rest of the ride wondering what was going to fall off next.

Having fixed my bike, Andy and Dave swapped machines for the climb away from the pond (towards the YHA), only for Andy to kindly snap Dave’s chain. At this point, Andy claimed his bike back and while Dave was left to fix a chain he didn’t break, we played around a small track that led back to the pond. At least it wasn’t me that was responsible for this particular stop.

At some point on the climb back up to Holmbury we picked up another rider (Jonathan?) who was out on his own for a ride. Following a neat little drop back towards the pond (again), Jonathan then showed us the singletrack that leads off Surfer Rosa (one I took some Moles down last year on an evening ride), a fast and flowing trail which linked up fairly neatly with the new trail back down to the pond. This was a nicer descent for me the second time, as with working chain rings I could pedal to pick up speed, rather than relying on pumping the trail as I had earlier.

Then it was back up Holmbury (again) before heading off to BKB. We searched for one of the alternative descents down to Peaslake, but extensive logging activity has trashed these trails, and only BKB offered a decent DH route to Peaslake. Then it was back up to Holmbury (bloody hell), before taking Yoghurt Pots, Telegraph and the rooty switchbacks back to Car Park 9.

We had a comedy moment at the bottom of Yoghurt Pots when a biker heading up the hill demanded, “Where’s the singletrack?”. Dave made it plain that a friendlier manner might elicit a more forthcoming response!

My SatNav, started after about 1km, showed a distance of 21km with a total ascent/descent of 830m. I recall we had a total time of 2 hrs 45 mins, with an actual riding time of 1 hr 25 mins. Allowing for the 5 mins where I failed to start the SatNav, did we really stop for an hour and a quarter?

It’s a little too soon to form an opinion on the Pace, especially given as I was concerned about the state of the drive train for most of the ride. As ever, it climbs pretty well. The real test of its descending abilities will be in a few weeks time where I have an uplift day booked for the Cwmcarn DH track. Meanwhile, here’s a few pics of the Pace RC506 to confirm my status as ‘Mr Bling’ (or 50p, the UK’s answer to 50 Cent).