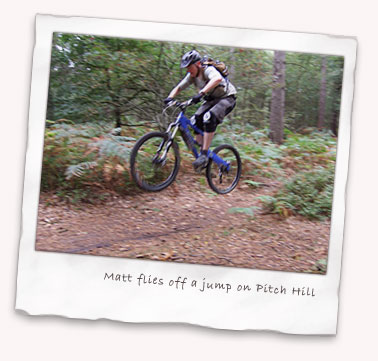 What a difference it makes having an upcoming event to focus the mind! With Dusk til Dawn soon upon us it’s fair to say a good number of us have been unusually active on our bikes recently.

Dave’s been assiduously racking up the miles with multiple rides including some trail centre and Fe-mole appearances, Jem’s hit the rollers when he can’t get on the bike and I’ve banged in a few singlespeed sessions to work and back. Even Mark, by his own admission has snuck out for some solo night-time mileage.

And it seems to be working. By our standards at least. We’re now at a stage where a 30 mile run really isn’t much of an issue and while being competitive at the D2D needs speed as well as distance at least we can be confident we won’t bonk after the first lap. I’m looking forward to it a lot.

Today we had an early start from the Hurtwood Control Car Park Number 2 at Peaslake. An 8:00 departure meant getting up at an unusual hour for most of us to drive over and get the bikes ready on-time. The purpose was to map out a route for AndyC to use as an hour long blast in a couple of weeks time so that he can back-to-back test a few bikes as his Whyte E-5 replacement. It’s never turned up since it’s sudden theft, either from the Plod or on e-Bay and I hope who-ever has it is suitably ashamed.

Our ride group was a nice compact slew of regulars, including Jem, AndyC, DaveC, Lee, Colin, Philip and myself. Some of us more regular then others perhaps but a decent sized group for Pitch Hill riding.

So off we went, climbing up onto Pitch with the Windmill as our first target in Winterfold Woods. The aim was to record a map using Colin’s excellent SatMap so we missed out some of our usual diversions before scrambling down Two-Headed Dog. Colin endo-ed alarmingly but didn’t go over the bars while I attempted it unclipped and paid the price as I slid off the back. No harm done in either case and we both retraced our steps for another go.

The sand and loam surface was simply perfect for riding today and the weather provided the ideal early autumn conditions to suit. After crossing the road we hit the swooping run down toward Jellies Hollow (I still prefer to think of it as Jenny’s) which we normally start from the Judges Seat. Today we missed that short diversion and were soon sweeping over the exposed roots and leaping over (and off) the crests to be found all along here. I love it and, as I’ve said before, natural trails have a lot going for them. 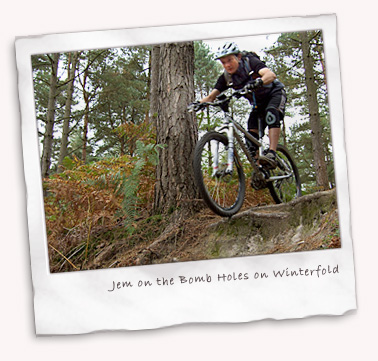 Retracing our steps slightly we headed for the bombholes which proved popular with several circuits just to be sure. Then it was onto the trail where we lost Mark on a night ride a few months back before Gone in Sixty Seconds which, err, doesn’t even seem to take that long! No matter, time to do that again then!

Turning again for the Windmill we carried on past it and down the rocky gully that ends in steps to the road. I’ve been down there on my Inbred at night in the wet and found it alarming but we all cleared it well today, instinctively letting the bikes step their way over the rough stuff without too much trouble.

A bit more climbing brought us to a fun play area where we ‘sessioned some jumps’. Well, more like sampled some tempting looking humps which lent themselves perfectly to what we’re able manage! There were three humps with the second one big enough to get some reasonable air as the photos show, provided you had a bit of speed and timing. Excellent fun although we nearly got taken out by a guy with his dogs who mis-timed his landing and speared straight towards us! I’ve made a mental note to stand further back…

Continuing on we came out near T-0 but detoured first to take in Rollercoaster which has such a great flow to it. Returning to T-0 we picked it up and linked it all together into T-1 and T-2 to come out laughing and breathing hard at the open green. We then turned and headed into T-4 with it’s tight and twisty lines and off-camber roots before crossing onto T-5 which contrasts all that with some nice flowing singletrack back to the church.

Feeling full of beans and confidence the next thing to do was turn back up the hill to the open green again and find Death Star to take us back to the village. Not having tried it for some time (there’s many fun ways to get off the hill and Death Star at night is not one of them) I found it very rocky especially just before the left hand turn over the roots but very grippy if you could ignore the rocks rattling about underneath you. Does that make sense?

Basically the rocks were a distraction but the actual turn was clear so you just had to hold your line and step down over the roots to run out on a steep but meandering line through the trees to the lane at the bottom. AndyC scored big time by (perhaps inadvertently) missing the turn and running straight on down via the direct route. A bit gnarly but once over the big step relatively straightforward. But I don’t think I’ll try that too soon.

With the golden September sunlight on on backs we rolled into Peaslake for a stop at the Village Store with coffee and cheese straws for me. I can’t think of a nicer place to hang out after some hard miles across Pitch and it was good to get a chance to chat to everyone – although the ride had been a pretty chatty one anyway.

After parting from Colin who was aiming for an early-return bonus point from his missus we climbed up Radnor Lane to do Barrie’s. Jem and I ended up following a rider up, determined to close the gap after Lee had goaded us and for a while all chatting stopped. We got him in the end but boy was it hard work! And it was good to see the others not very far behind us either. If you were the rider we hounded, sorry for using you as a paceman!

Barrie’s delivered the perfect counter point to my thoughts about natural trails though. In peak condition, it seems to be flowing better than ever. With plenty of speed I found myself flying off some of the jumps along there which put a big grin on my face until the Waterfall narrowed the concentration a bit as it always does.

To be honest it’s multiple lines, created by so many riders finding their own route down is clearly not sustainable and it’ll be interesting to see what the Redlands guys manage to create when the work starts to replace it in the coming months.

So that was that for the day, an early finish which left me wanting more. Despite that, after recent efforts it’s no surprise to find myself feeling pretty tired this evening, but roll on Wednesday evening for the next night ride!