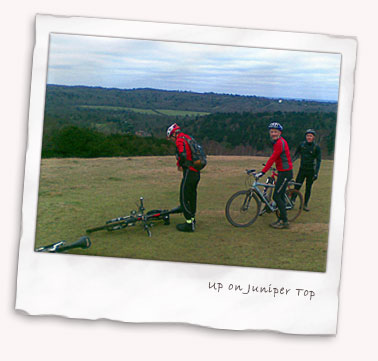 The year is drawing to a close, and an eventful one at that. With mild weather and no rain for a couple of days at least we got out for a tramp around the Surrey Hills, which turned out to be a nice good ol’ cross country mix around Headley and Norbury Park.

My fitness is slowly returning but after struggling on Wednesday’s ride I was pleased to find today I was showing the first signs of improvement. Even so, my head was hanging heavy at the end and there were moments on the ride that I was bringing up the rear. This was not helped by serial chainsuck in the middle ring which had me either grinding in the big ring or spinning ineffectively in the granny for much of the second half of the ride.

However, I wasn’t the only one with mechanical issues, as Dave was grappling with the simple purity of his singlespeed setup which didn’t take account of the difficulty of correctly adjusting the chain length, drop out tightness and caliper positioning all at the same time. Still, it seemed to be working fine by the end!

John too had the odd issue with his new chain, cassette and middle ring. What can I say, that’s winter riding for you. Things wear out and it’s cold in the garage so final adjustment seems to happen out in the wild! About the only person who didn’t seem to have any issues was Terry, a new rider who was joining us for the first time.

With the mild weather it was a shame that The Referee didn’t make another appearance as I’ve been wanting to get a shot of Dave’s mimsy white glove liners since Lee and Colin first noticed them. But it’s a long winter so sometime soon…

We headed through Norbury and over to the top of Box Hill via Juniper Top which made a less painful impression than Juniper Bottom usually does. It’s a wide grassy climb that provides steady effort without being impossible and although technically (well, actually) being a footpath we figured going up was fair to walkers who’d be travelling at about the same speed as us anyway. Not that we saw any.

Once at the top we put in a quick loop of Headley, taking in the Secret Singletrack which is now perfectly groomed since the bracken has died back before circling back to Box Hill for a cup of tea and my favourite, date slice. A bonus was a surfeit of attractive female riders (both road and trail) that were there and while it’s tempting to muse on that, it’s best not to go there. Tea, cake and crumpet is all I’ll say.

A quick trip down Box Hill (where it’s possible we passed some of the DoMTB crew?) left us with a climb up Crabtree Lane from Westhumble. The fact we were all passed by a female runner with a dog says it all really. The fact she took a different route when we reached the top and then passed us again 20 minutes later says even more. Perhaps we talk too much?!

Back home for a relatively early finish and the knowledge that I’m slowly improving means I’m looking forward to the last few rides of this year.