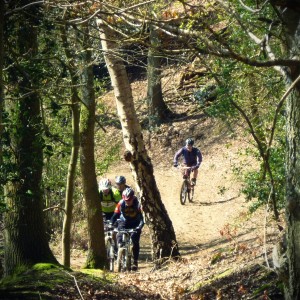 April is the cruelest month. Well, it’s been pretty miserable so far anyway! Some readers looking out the window on Wednesday morning may be surprised to see that just a handful of days earlier we enjoyed a rare morning of fine Spring weather.

Our Sunday Mole outing consisted of DaveC, Tony, Rob, Lloyd, BigAl, JonH, Ray, JohnR, Andrew and Pascal. Ahhh, Pascal! Well, what can I say about Pascal? Errrm, we lost him, for the second time in the two rides he’s joined us!! That’s really bad isn’t it?

Really, we don’t make a habit of it but clearly there’s exceptions to the rule. After trundling along to Polesdon and then up Hogden Lane (who’s idea was that?), we lost Pascal on Collarbone, where the tree hangs down near the end where the log hop over used to be. At least that’s what I think happened. Making the elementary error of not counting how many riders started we were lucky not to have discarded riders all over the hills on Sunday.

My only excuse was I asked Tony if he was last as we left Collarbone and he said yes. Fortunately there’s no blame culture round here in any case but if anyone asks, it wasn’t me OK? Really sorry Pascal and glad to hear you got home safely.

At the time we were already behind schedule after a lengthy puncture stop for John way back on Hogden Lane (who’s ideas was that again?). John had slashed his tyre on one of the many flints to be found on that miserable climb and being tubeless had to resort to some old fashioned inner tube things after first exhausting the possibility he could fix it with his rubbery worm. Yikes.

Once we’d casually discarded Pascal on Collarbone, the dropped down to the Abinger Roughs via White Down which I was expecting to be quite greasy after out month of rain but it was OK really. Nothing too taxing so long as you weren’t trying to go flat out.

We settled into a nice pace and wended our way through the Abinger Woods, then through Abinger and on to Shere with the unusual sensation of sun on our backs. The plan was MarkyMark’s favoured route to Newland’s via St. Martha’s Hill which adds another four miles or so onto the ride but we wanted to make the most of the morning.

The hills were sprinkled with Duke of Edinburgh teenagers staggering here and there weighed down by over-sized packs. Some seemed to be enjoying it more than others but they should thank their lucky stars they weren’t out during the late afternoon when heavy rain swept in. At least, I hope they were all back at base by then!

A second puncture struck on Black Heath, with John’s newly tubed tyre picking up a puncture which was the point at which we realised Pascal was no longer with us… The stop lengthed when I think Andrew also discovered a puncture? I can’t remember now! Anyway, it was an age before we were moving again but once we were, we had St. Martha’s in our sights. 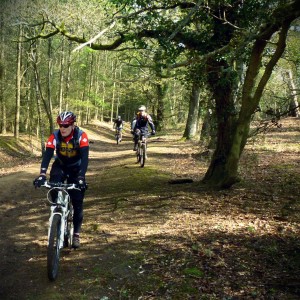 St. Martha’s is one of those nasty climbs that I would gladly forsake but without it there would have been no Eccles Cake for me at the cafe. It’s no overly long, shorter than Water Lane on the other side of the hill, but it’s steeper and trickier in places. I settled into a rhythm behind JohnR who shot off ahead, sniffing a Strava segment, his attempt at which collapsed as soon as we reached the first stretch of muddy track two thirds of the way up.

There was nothing for it but to pick a tortuously slow line through, dabbing here and there where traction disappeared entirely. It was, simply, a slog. Behind us, riders straggled up the climb but while we re-grouped at the top, there was another long wait for Dave, Ray and Rob. In fact a really long wait.

After John and gone back down the hill to investigate it turned out to be yet another puncture, this time for Dave who a deep cut on his rear tyre.

Underway again, we finally reached Newland’s with me tucked in behind JohnR who was in full scale sprint-to-the-finish mode. I had no idea why but thought there must be some reason so followed him slavishly, only to find he was hoping to get first dibs on any warmed Eccles Cakes that might be available. But John, they don’t do warm Eccles cakes here, that’s Ali’s cafe on Headley! Oh well, best to be safe than sorry.

After a decent pause in the sunshine looking at a frenzy of Vespa scooters, the group split, with some of those short of time pressing on. The rest of us stood around while Rob fixed a puncture that had manifested itself on departure! By this time I was quite resigned to the situation; in fact I don’t remember the last time we had so many punctures on the same ride.

So lagging behind, we needed to cut out too many deviations from the most direct route home. This meant a wander across the North Downs Way and Trouble in Paradise, swapping this instead for a wade through the wide and surprisingly deep puddles on the Drovers’ Road back to Ranmore.

By the time we’d got home it was getting close to a 1:00pm finish which is late even by my standards, with 29 miles on the clock from my front door (which includes 3.5 miles travelling to/from the Bockett’s car park). I really enjoyed the relaxed nature of the morning but my 10 day layoff this month due to rain, wind, hail, thunder and general can’t-be-arsed attitude made itself felt during the afternoon.

No a bad way to spend a Sunday really.