Due to the incessantly changeable weather and amount of rain that fell last week, it seemed a good idea to meet over at Peaslake for Sundays ride and avoid the worst of the Ranmore B@stard glue mud (copyright quote property of Mr Karlos Fandango)

Schleppin up at Walking Bottom car park for a very cold and frosty 08:30 start, were in no particular order; Jem, D’Andy, D’Dub, Elliott, JR, James and a very hungover myself. Sadly we were missing Mr Karlos Fandango, heal quickly Mate.

As ever, the usual cross section of bikes were on display, full sus, hardtail, Phat, not too mention D’Andy on his “chubby” rigid forked ‘Dale SS.

A simple but cunning plan to head up over towards Pitch Hill and pick up some of the fun trails was formulated as we began the first climb out of Walking Bottom and up onto the hills, our tyres alternately rolling through frosty mud, semi frosty mud, icy puddles, slush puppy puddles, good honest mud and bone dry ground. This was to be the format for the day and kept us on our toes for the first hour until the temperature climbed above freezing and proper mud developed! Not B@stard glue mud you understand, just the nice normal wet mud mixed with a bit of sand, the sort that doesn’t cling to your tyres and frame thereby turning your bike into a heavy unwieldy brute.

Once we got rolling up the first long climb of the day everyone had warmed up cold toes and fingers as we turned in to Proper Bo, forking right lower down and climbing up to do it again with a left fork this time dropping us down again to pick up the long Moon Hall climb. A fun trail to warm up on and get the reflexes working. The top of Pitch Hill in hazy sunshine saw the trails become a little more muddy as we headed into the steep rooty switch back trail that is Eric. Now I wouldn’t say it was carnage going down Eric but I did see a couple of riders having a little lie down next to their bikes.  As is the way I enquired after their well being before abandoning them and heading on down. (Elliott should be well rested as I noticed he had two horizontal moments on this ride)

Halfway down Eric I passed a bewildered looking Jem who seemed to have ever so slightly left the trail at some point and was regrouping before giving it the beans again! On and down we plunged into the lower boggy area before being spat out onto the road.

Next was the no pain no gain road climb up Ride Way followed by the winch up the gulley, or Windy Miller, and across onto Pitch Hill where we bumped into Wobbem, Jonesy, Big Al and a few other jump jockeys.

This was to be the format of the day with winch and plunge very much on the menu as we took in the delights of Evian, Northern Monkey, Charles Bronson, Super Nova and many others. D’Dub seemed to have got his mojo back and was caning it effortlessly down the trails. Huge fun and big grins on faces all round with JR having way too much fun on his Phatty and frankly, behaving like a hooligan! I was experiencing fork issues by now as the pre-owned Reba’s I was testing from a certain Mole Father were now as stiff as hell and made some of the roots and drops interesting to say the least! Further investigation back home in the man cave showed the lower legs had lost 70 psi?? He will be hearing from my legal team  … no wait, I haven’t paid for them yet! Taking tea with the jumpy boys

By now tired legs for some of us due to winching up the more slippery trails meant it was time to head back down to Peaslake for refreshments where we met up with the jump jockeys again, with D’Andy deciding to photo-bomb them. He’s such a tart!

Big Al looks to be unimpressed with his nosh tho’?

The usual display of unabashed Mole gluttony involving a sugary calorific overload of cakes, cheese straws and other delights were consumed before a democratic decision was agreed for some more action over towards Yogurt Pots and back down BKB. By this time me and the Jemsters legs were sending us all kinds of messages, none of them good, despite me having consumed two cakes, as we hauled our weary carcasses up the Rad lane climb and across to Holmbury Hill and Yogurt Pots. I have to say all I could do was roll down the Pots as there was nothing left in the tank before we headed back with legs burning to the top of BKB and back down to Peaslake.

A great mornings entertainment with 15.5 miles on the clock, 2500ft of climbing, a truck load of calories burnt, no injuries or mechanicals, so all good! Filed under Rides in February 2015 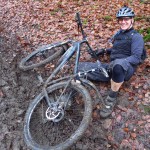