Today it was back to the natural habitat of all moles with a muddy winter ride over to Reigate. We tend to drop in the odd ride east just to prove that you can have fun without going south toward the Leith and Holmbury honeypots, but at this time of year it’s all a bit ‘clay’.

Remembering a fast blast night ride from last summer we decided to give PIJ’s roundabout route another go. 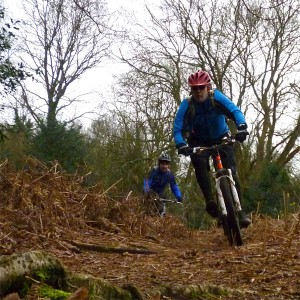 Up at Bockett’s then this morning were 12 hardy moles, including DaveC, Big Al, Barrie, Tony, Ray, KevS, Emma, Jason, Jez, Danny, Lloyd and myself, eventually joined en route by PaulM, lucky 13! It was one of those days when starting out and any enforced standing around was going to turn chilly but once underway the flat wintry weather didn’t really cause any real problems.

We headed down into Leatherhead, passing some guys preparing a canoe at the river (well, it’s a hobby…) before embarking on the long climb up to the top of Headley, first up Alsation and then on past Tyrells Wood. In all it’s a long two and a half mile climb with only the odd dip to relieve the workrate. At least most of the pain is over after that although there’s still plenty of work to do. Mud was quite a problem.

As was the pace for me. I’m still recovering from a xmas virus and my enthusiasm can make me ride far harder than I’d like. Mostly I was able to hold back, knowing that an endorphin fueled dash was going to leave me paying for it later but it’s not easy to reign yourself in. And the singlespeeders up front were running pretty quickly.

Fortunately, unlike on the road there’s plenty of stops to regroup. At the top of Headley we headed down the flinty track toward Epsom Downs before turning toward Walton on the Heath and passing the Blue-something-or-other pub as we headed toward Lower Kingswood.

There’s is quite a warren of trails across Walton Heath, with lots of nice singletrack. My memories of it at it’s summer peak (where we found ourselves dashing through some great rollercoaster trails) were quite different from the reality of damp roots and winter clay but it was enough to show it’s worth a revisit when things dry out. As it was we fishtailed our way across the Heath but still managed to enjoy ourselves.

Eventually we popped out on the A217 Brighton Road for half a mile before turning into Kingswood and running across open farmland on rough pebbly tracks towards the Gatton Estate. At this point we bumped into PIJ (aka Phil, aka workshopmanualman) who had gifted us this route via GPS last year despite never having met us. The wonders of this inter-fanglement technology.

After chatting long enough to get cold again(!) we pressed on, taking the sharp drop down under the M25 before hauling ourselves up the Gatton climb to the Reigate Tea Rooms. A welcome but shockingly expensive stop. Remember, the coffee’s reasonable but BYOS – that’s Bring Your Own Snacks!

After that it was a case of returning to Bookham via our much-travelled rolling route across the Tadworth golf course. Unusually today people seemed to be out in force. We saw loads of riders (on bikes and horse), plenty of tediously carping ramblers and for once had to stop while a golfer played a shot off one of the tees. No pressure, but he hooked it!

A brief puncture stop for Danny gave us a rest, then it was on toward Headley via the draggy climb up to the car park, a long slog for me behind Kev who seemed to be making it look easy.

With the end looming we headed into a Secret Singletrack that was in great condition. I had the luxury of going first so I could stop and take pictures and was really enjoying myself. I didn’t really want to stop but made up for it after everyone had passed by steaming down the last flowing section. Can’t do that on a road bike…

The fun continued at Tyrells Wood as we picked up Life on Mars, by no means what I’d call fun on the top section which is heavily churned into greasy slop but lower down it gained grip and I gained a bit of speed following Tony. Even so I was a bit worried my front wheel was going to let go at times.

Onto Alsation, a careful descent for me knowing people were out and about and then we only had the climb back up to Bookham to deal with. By now I was happy enough to get back, the beginnings of tiredness were just creeping in and it felt it was getting colder. All in all, 24 miles door-to-door and the realisation that my stamina needs some work!