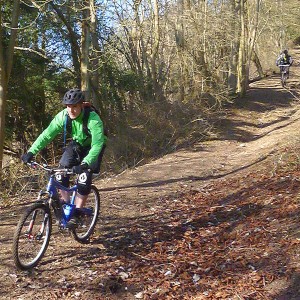 Today is a grey day. It’s Monday, I’m in the office and the view out the window is overcast and grey. It’s the sort of day that would be fine for a ride, there’s no wind and no rain, so you’d probably be able to enjoy yourself. But it’s not inspiring. It’s not like yesterday.

It started with a crisp chill to the air that led some of us to overdress, expecting February weather. I was lucky enough not to so that by the time I’d arrived at Bockett’s Farm I was feeling pleasantly warm in just a base layer and windproof softshell. The sun was out, the temperatures were rising quickly and the trails – dry and grippy – were beckoning.

Not to everybody however. Tony and Barrie turned up, it’s true, but not on mountain bikes. They had their skinny-tyred perversions out, ready for another 65 mile run to the Sussex borders on the tarmac of all things which, pleasant as I’m sure it was, couldn’t really compete with a ride over to Leith Hill for me. We dutifully mocked them in a lightly disparaging way as the rest of our ride group coalesced to include DaveC, Andy, Nick, MattMower, JohnR, MarkW and myself, with the promise of meeting Jem at (top of) the Rookery.

Off we went, along the Admiral’s track at a faster pace than I expected, heading for Polesdon as usual. This was perfect riding weather and we were soon at Polesdon, then down to yew Trees and up the other side before settling into the usual climb to Ranmore which spread us out a bit. There seems to be something of a Bermuda Triangle of Time when you are on a mountain bike and riding in a group as despite never feeling that you’re hanging around waiting for people, vast chunks of time seem to disappear in the course of our bike-related chats.

Even so, with the harsh, bright sun lighting the columns of the bare forested slopes of Ranmore we tracked along Badger Run and then headed down the Land Rover descent. JohnR went ahead to get some photos before myself, Dave and the rest followed him down. He commented that we came down a lot faster than he was used to! Halfway down there’s still a fallen tree across the track but this just serves to create an interesting detour round it as I’ve often thought Land Rover would be more interesting with a few twists and turns.

Crossing the railway we circled Westcott village before starting up the Rookery climb which pushed my heart rate up toward my maximum. It’s not a difficult climb but it’s hard physical work so I was glad to catch my breath at the top and have a chat with Jem while the others arrived.

Next on the list was Wolverns Lane, as enjoyable as ever as it meanders through the trees, the perfect combination of brake – point – go singletrack. We needed to pause for a few minutes while Andy caught us up again after a puncture but then we were pressing on up toward Summer Lightning. Alongside the trail the farmer’s fields were covered in a carpet of fresh, new-sown wheat about six inches high and zesty green and with the sun shining brightly you had to try really hard to be miserable. Here and there were odd, peaty patches of damp but that was about it.

Moles ride to Leith Hill in the February sun from muddymoles on Vimeo.

We pushed on to the bombholes and over toward the top of Deliverance, peering down and trying to work out what condition it was in, before we carried on to the cricket ground and then the start of Chicken Wings. This part of the hill is all sharp drops into and out of swoopy bowls which were pretty soft at the bottom with only a firm narrow line to follow so it took a bit of concentration to follow Dave and MarkW over a route I’ve not down before. As with so much to do with mountain biking, you need to use a lot of your upper body to negotiate a trail like this, shifting your weight and pushing forward with your hips to clear obstacles threatening to stall your progress, then moving back to absorb the drops. It was great fun, so we had to do it again although I felt it was just slightly too complex to get a smooth flow going.

Next was the Tower climb, preceeded by the deep gulley run in, a section of trail I love, especially when I’m on the Five. The climb itself went quite well and I stayed in the middle ring all the way up to record my best time so far. Again, this is technical riding, picking a line and balancing progress with traction. I don’t try and go straight up but try to pick a route which is as direct as possible while still being rideable.

Disappointingly there were no Eccles Cakes at the Tower, but we did meet Charlie from the Dorking Cocks for a chat over coffee. The place was busy with lots of riders, walkers and families all having the same idea on such a glorious day. By now temperatures were nearing 14°C and I could have sat in the sun even longer than in fact we did, having speent many a weekend this year shivering in the wind.

Suitably fueled up we headed – with half the Hill it seemed – to Personal Hygiene, Dave and I realising only after the event that we hadn’t warned our newer riders what to expect! They seemed to be in one piece but I was amazed to hear JohnR say he’d ridden it for the first time as I assumed he was a veteren of it. I guess it’s just one of those sections of trail that you have your usual route round and it never quite happens but I’m normally too busy concetrating to notice what other people are doing. Well done John! 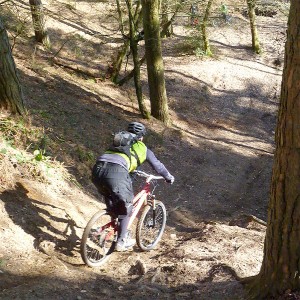 A quick canter across the sunny side of the Hill brought us back to the cricket ground and soon after, back to Deliverance. I was feeling really comfortable on my bike today and followed MarkW down, following the line in from the left which I think is much better. The key is keeping quite slow at the top, allowing the bike to run briefly on the roots in the middle and then braking smoothly immediately after but it is a challenge which is very much not to be treated too casually. Last time Dave tried he had a nasty, winding fall so he was pretty pleased to conquer it today.

We met up with the others as they came down the steppy rooty run down to Waggledance, one of the man-made trails which is now very well-formed. You can go as fast as your fitness allows you along here and really enjoy the nicely judged berms cut into the dry, sandy, ashy soil. A short step from there is the start of the de-nuded Summer Lightning, visually a pale shadow of itself although to my mind it runs better then it’s ever done, including the drop off over the fallen tree at the end of section one. The second and third sections seque into each other and keep the work rate high so that by the time I’d reached the end (after attacking it quite hard) my heart rate was 174.

Immense fun, and enhanced by the regular path leading us on, down the hill all the way non-stop to back down Wolverns Lane to the top of the Rookery. I was following MarkW who was looking very comfortable, with both of us hooning the drops coming off the banks onto the sandy lane, ultimately both of us held up by a rider in front of us who probably didn’t realise we were there.

Back down a very fast Rookery after parting with Jem we got back to the back of Westcott before opinions we sought on how best to return to Ranmore. Dave’s shout of White Down just about drowned out John’s Macpherson’s suggestion, neithe rof which appealed to me but I was happy to follow wherever.

White Down is a long, long climb but all rideable for all of us, some at a faster pace than others. Nick seemed to have got his second wind and of course John is something of a climbing expert so there was little chance I’d overhaul him but having started last I moved up the field quite smartly which I was very pleased with.

We didn’t have too far to go, first heading off down Collarbone and passing the only two negative walkers we’d seen all day. You can’t please everyone. Collarbone was fast with a few slippy corners but with the Five working hard nothing seemed to be too much of a problem. We finished off by retracing or wheeltracks along Badger Run, then down to Polesdon and up Yew Trees to finish, tired but happy at the Bockett’s car park after nearly 23 mile sof riding.

(Some great pictures of the ride from JohnR on Flickr)