D-Dub had a long-standing arrangement with some of his Tunnel Hill Troll mates (David & Tom), to show them the delights of the Leith Hill and surrounding area. For those Moles seeking some big air (D-Dub and PaulM), or in my case not feeling up to a furiously-paced XC trip from Bocketts to Peaslake and back, this was an alternative. 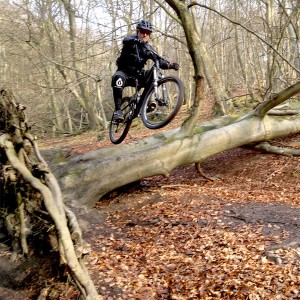 We met at 8.30am, fuelled with Costa coffees from various garages en route to counter the effect of the loss of an hours sleep. A brief ascent past the still shut tower, we wouldn’t be back here until 11.30am, saw a fast descent of Personal Hygiene followed by the bomb hole/gulley at the base of the tower climb.

My adjustable seatpost (remote-operated, uppy/downy) only arrived in the post today (Monday), so I was back to stopping and faffing about every 5 minutes or so. I was reminded that I needed to do this after I had crushed some ‘sensitive parts’ while off the back of the saddle on Personal Hygiene. I didn’t repeat that mistake, I can assure you.

After the Bomb-holes by the cricket pitch, we hit Deliverance. THT David made a great attempt at the mahoosive (in my eyes) drop-off on the riders right as you look down. Unfortunately the soft ground saw him having to slow and correct his entry line, and the lack of suitable speed resulted in a very flat landing half-on and half-off the built-up run out. The tyres couldn’t cope with the grip demanded, and he and the bike slid sideways and down quite hard. He was ok, but I suspect David might be feeling a little tender today.

The rest of us took the trickier, rootier descent to the riders right of the tree. This was a first for me, having always taken the easier line in the past. Waggledance followed, before heading up to WoM via Coldharbour. 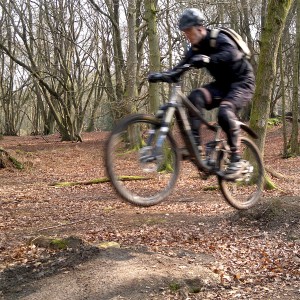 WoM was great fun, as ever; with our own D-Dub and THT David taking the jump over the tree a couple of times, one attempt being captured by Paul on his phone and should be making an appearance on Vimeo sometime soon. I looked at the jump briefly, then rode over the root bole which was enough excitement for me.

We rode another trail, but it was very ‘swampy’ down that particular alley. THT Tom provided a great comedy moment by attempting the first bit of ‘shore’ that covers the first really muddy section. Realising a bit of speed was required to loft the front wheel up the step and onto the shore, his first attempt was abruptly halted when he suddenly shot sideways into the undergrowth some several feet short of the ‘shore’ section. Clearly the run-up was slippier than he’d anticipated.

He got the second attempt spot-on, and successfully rolled up onto the shore, and to a chorus of ‘Yesss’ he rolled off the short section. The chorus rapidly switched to ‘Nooo’ as his front wheel pitched into the last, almost sunken, rung of the ‘shore’, and over the bars he went. Again, no harm done, but we rapidly retraced our tracks to WoM as this alley turned into a swamp and wasn’t really worth continuing with. The rest of WoM was the usual blast.

We were worried that F&M was not accessible as it was enclosed by some red and white barrier tape that was surrounding the entrance, hidden behind several portacabins. Clearly there’s some filming taking place in these here woods, but having walked the bikes around the back of the portacabins and the trail was open for business as usual. 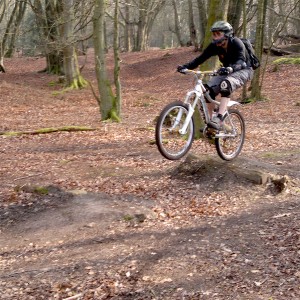 We continued on down the hill towards the valley, through a steeply off-camber section and some more jumps which D-Dub and THT David examined closely but saved for another day. We then headed back up and over the road to the play area. Here we all had some fun, with THT Tom, Paul and myself enjoying some small air, while the other two maniacs went for the larger stuff. THT David provided the comedy moment this time, as his landing strayed off-line and he ran into a small tree buried in the undergrowth and again, over he went. These THT boys are great entertainment 😉

By now it was time for some cake, so off to the tower we went, via Slidewinder, up past the start of Summer Lightning and through the Bomb-holes to the cricket pitch and the climb to the tower Here we bumped into the DOAMTB crew, and pleasantries were exchanged with Lee and others. I was pleased to make the climb in one go on my longer travelled Pace. Ok, so I had no more gears left to me, but at least it proved that I can ride up with it as well as down.

After our well-earned cake (homemade Orange and Almond sponge cake for me), we had a brief play around the woods and the quarry, before heading back to the cars via Chocolate Jesus. It was a great morning, and I was feeling pretty shattered, but was amazed to see we’d only covered just over 10 miles. I can only assume that adrenaline was accounting for the slightly shaky feeling, though the 1250 metres of ascents may also have been responsible for some of it!

We had a great morning. Thanks to D-Dub for acting as routemeister, and I’m looking forward to a guided tour of Tunnel Hill sometime soon.