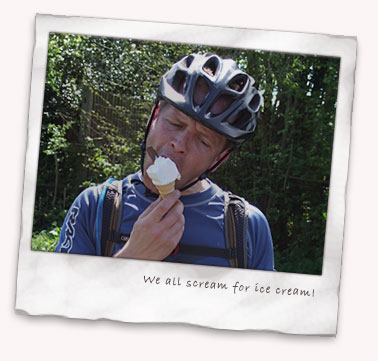 Thankfully, the only thing in common us Moles had on Sunday with the 25,000 or so crazy folks running the Flora London Marathon was that fact that we covered 26 miles.

Other than DaveC, who was complaining of bonking (a term my wife still finds hard to relate to cycling), by the end, we were far less exhausted. Other attendees were Jez, Jem, JohnR, AndyC, Lee, Richard and Toby. We also picked up Nick on the route home, who was out for a cheeky solo training ride. I feel I need to give special mention to Lee at this point who once again attended in body, not mind, due to the ongoing sleep deprivation caused by his new arrival – it will get better Lee we promise!

So we headed to Leith via good old Yew Trees and then down the steep and fast chalky gulley to the railway line as a fun alternative to either Landrover or White Down. We really are spoilt for choice around here for fast and furious action, as witnessed by the smoking and tempered rear brake on my Inbred that JohnR was using for his final test ride today.

Next stop – The Rookery which was pretty much cleaned by all present and then up to the top of Wolverns Lane via the singletrack. DaveC suggested a trip over to Wave of Mutilation and Foot & Mouth, which represented unchartered territory to all bar him. The Redlands Woods were beautiful and were clearly once the epicentre of Leith trail building activity until use was ‘discouraged’ by the unsupportive landowners. Big shame as the stunning terrain lends itself to some highly challenging trails, most of which now belong to a bygone age. As far as a few of them go – thank goodness – way too gnarly for my liking and health.

Both trails we did take on were very technical and great fun, some of the steep drops requiring some exaggerated arse-on-the-back-tyre body positioning in order to prevent going over the bars. We also encountered the fallen tree at the bottom of Wave of Mutilation that gave Matt a serious headache a few years back – I am so totally full of respect and admiration that he even tried to ride it!

Due to time pressures, the planned attempt to find Windy Willow was shelved and we headed back from whence we came, adding Regurgitator and the obligatory Summer Lightning to the mix for very good reason – you just have to love them! I think there is probably an unwritten rule somewhere that states that mtb’ers should never ride the same trail twice in the same ride. Generally I go along with that, but I do feel the exception has to be the Rookery and Wolverns – they’re so good in equal measure whether it be up or down. Today saw me a bit over excited and finishing up in the hedge at the bottom of Wolverns but no harm done.

We headed back to Ranmore and instead of White Down or Pilgrims, we thought we’d have a crack at climbing McPherson’s Mount and Folly, which is a trail that pretty much just points directly up the hill. We all managed to get up the first part (Mount) with a few hearts bouncing off the rev-limiter on the heart monitors that so many folks use now. Whilst the general feeling was the Folly part was too much to ask, I felt I just couldn’t let it pass and off I went, telling the others I’d see them at the top. Seeing my determination, Jem followed suit.

With the forks wound right down and the point of my saddle trying to penetrate me, I am very proud to say I cleaned it without any dabs as did Jem. OK, when I got to the road, my feet were tingling and I was seeing stars, but I did it. Such an effort was worthy of reward so ice creams all round at the top.

Next up was the vicarage descent to Bagden Hill and then yet another climb, up Crabtree Lane to pick up the Norbury Park thrash across to the radio mast. The end now in sight, we headed over to Infestation for a furious and root infested descent to Bocketts Farm to finish on a high.

Another great ride with lots of climbing, fast descents and technical sections. A big up to Jez on his singlespeed, who was convinced we were trying to kill him today. Yes, we did try, but you’re too damn fit!