The picture you see here bears no resemblance to the kind of ride we had on Sunday. I just had to include it since it makes at least one of us look good!

Plenty of rain in the week, a well documented clag-fest elsewhere on the Surrey Hills and the need for a few miles meant we headed toward Epsom Downs for a change. On the way, we passed Headley at least three times! 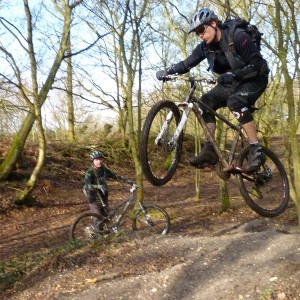 Bockett’s Farm was a busy place Sunday morning. We had DaveW, Tony, Paul901, PaulM, JohnR, KevS, BiketechMark, Garry, Keith, Ray, DaveC and myself out for a Sunday ride. I’ve spent two off-road rides this week sliding through deep mud so we decided to give Epsom Downs a go today as the trails generally offer a firmer surface.

We rode up to the sawmill and the top of the radio mast descent, passing (I think) some DoMTB riders heading the opposite way. After my mammoth mileage last week my legs certainly felt slow to warm up and my reflexes felt a bit slow too on the descent down to the A24 – the tracks are greasy as hell and have sudden float-off-to-a-big-stack patches. I enjoy sliding at low speed through this stuff but find myself panicing somewhat when you hit them at speed and try to follow previous tyre tracks.

After a slow ride through Mickleham village we started on the upward climb from Juniper Hall to the Gallops. It felt quite a comfortable pace really, once my muscles had loosened, and I must say those extra miles seem to have made me at least feel stronger. I’ve mentioned before but I think focussing on your heart rate for a few rides can make a big difference and gives you an excuse not to try to be first to the top!

Further slithering once past the Gallops brought us to the Tyrells Wood car park and then on to Headley, bound for the Cock. Paul901 started to suffer from the first (but not the last) of his chainsuck, a bit of bad luck which is just as easily put down to mass mud as it could be a worn chainring. We’ve all suffered this in the past but it’s very frustrating – could be a stiff link, worn chainring, mud etc. Always hard to cure as a result.

At Headley village we got the chance for a brief downhill run under the motorway which is a trail I quite enjoy if it wasn’t for the slog up the otherside of the relatively shallow valley. It’s steep enough and long enough to make you do some work although unlike our last run up here I wasn’t suckered into to tramping after Tony and Keith, our increasingly fast climbers!

After here it was time to head down Horse P!ss Alley which takes you down a long gulley-run to the back of the Epsom Racecourse and Langley Vale. At least that’s what it used to be and I never liked it greatly as a result – too much gulley, too much flint, too fast for error for me.

Now it’s been ‘sanitised’ with the addition of tons of granite chippings for at least two thirds of it’s length which has done nothing for entertainment and still leaves a rapid eventual transition to chalky gulley. Past that and the spring-like weather (rain) has made the clay very difficult to ride so it was more slithering and sliding down the last blast descent. I think we all felt rather short-changed by all that even if I have to admit the track is not there for our benefit really.

Having reached Langley Vale we took the climb back up toward Stane Street. This passed at a moderate pace which suited us all as the pack stayed nicely grouped by the time we’d reached the top. Further progress brought us to Stane Street proper and a real Somme of mud near the golf club which needed a good spinning speed, a bit of strength and some quick reactions to get you through dab-free. The downhill on the other side was just as much a challenge as there was more of that chuck-you-off mud to put the frighteners on you.

Having reached the top of Alsation we turned up, back toward Headley for a rendezvous at Ali’s tea room which made for a very pleasant 20 minutes or so sitting in the Spring sun. I’d felt a bit underwhelmed by the route I managed to steer us by so far but really enjoyed just sitting there catching the sun and chatting to everyone. And John will be interested, but maybe not pleased, to know my hot Eccles cake was very nice. A new experience for me and a shame I got the last one!!

With the moderate pace several of us had a few miles left in our legs but with time getting on we decided to head directly back to Leatherhead via Secret Singletrack which was riding very sweetly again today. Since I’ve put those new wheels on my bike I’ve found these flowy trails really suit the Five which bodes well for Swinley next week. For the third and final time today we passed Nower Wood, this time on our way home.

Life on Mars was an obvious choice and I’ve heard it’s a nice trail when it’s dry! As it was, we were reduced to a slow slide through the woods, still fun but not what it will later this year. The finish on Alsation was rather slippery affair but I didn’t really care as by now it was starting to feel positively spring like and for the first time this year I was warm in the sun. Bliss! However slippery it is now, we’ve hit a turning point I think.

Arriving back at Bockett’s saw us notch 20 miles or so, 22 for me door-to-door. As I said, the day was a trifle underwhelming in term sof route but it was great to see a few people join us that have been busy these past weeks and even better to see that Spring really is just around the corner.

Keep riding. Or, for some, why not think about starting!!?