Yesterday was a fine day for a bike ride and with the recent dry weather we were feeling ambitious enough to put in a long one to Peaslake and back. It’s a long way for cheese straws but it does let you enjoy some of the best bits of the Surrey Hills!

Starting, for the first time this year in British Summer Time, were 12 riders keen enough to get out despite losing an hour’s sleep. 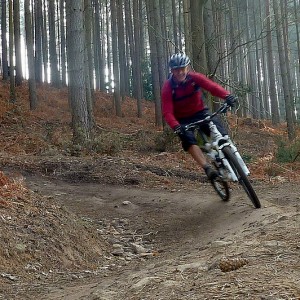 I was a bit late, having to hurry to get there in time so on my arrival the group only lacked JohnR who we picked up at the end of the Admiral’s track. Which meant the whole group consisted of BigAl (who had kindly agreed to lead us round), Dom, Lloyd, DaveC, Ray, KevS, YoungJohn, MarkyMark, Jez, JohnR, Keith and myself. The idea was to head to Abba Zabba and then down Raikes Lane and up toward the Volunteer before heading up to the top of Holmbury and down to Peaslake.

It was a reasonably brisk pace at the beginning and with a few miles in my legs this week I was happy to trundle along near the back chatting to John and Lloyd. We were trying to keep forward progress even if it meant the pace dropping at times so stops were at a minimum as we reached Polesdon, then headed down Yew Trees and up to Ranmore. From there it was onto Badger Run and Collarbone where I briefly needed to put a hand on the ground as the bike skipped underneath me.

In my rush to get to the carpark I’d over inflated my MudXs and they felt strangely unreliable as we reached White Down and headed round the back to the reservoir and Abba Zabba. JohnR had been having trouble with his tubeless set up which meant a couple of goes pumping up his tyre (it eventually sealed with no further problems) and this dropped us to the back of the pack as riders either had a go at Abba Zabba or took the alternative route.

I was half in mind to try Blind Terror 2 but the bike didn’t feel quite right for me so after we’d crossed the road and John and I had caught up with the others at the road I let a bit of pressure out of the front tyre. I was pleased I did as the bike felt so much better for the rest of the ride. It shows there’s so many variables at play making our bikes ride the way they do, I’d have been unimpressed with my MudXs if they been set up like this from the beginning but happen to rate them very highly. So don’t write off tyres that seem to be a bit rubbish, trying some experimenting with the pressures!

Our continued progress took us up the long climb along Raikes Lane to the Volunteer pub which I found rather easy, helped by lots of decent conversation. I think those road miles are paying off in teaching me not to burn up every climb but to concentrate on how your heart rate feels and back off or speed up accordingly. I’d normally just attack the hills then stand around getting my breath back.

Finally we were on Holmbury Hill, heading up from Car Park No. 9 along familiar trails. The hill has changed somewhat recently with the ongoing tree-felling and woodland management. Big Al seems to know the area quite well and was able to put together a great series of old and new trails to me, the highlight being something un-named. It’s a long contouring run that brings you eventually back almost to the bottom of the Hill, via some great sweeping berms and a short jump. An excellent trail…

Next it was back up, with the ultimate goal being the drop down Barry Knows Best but that was after we’d had some more great trails to try. DaveC was unlucky enough to get bitten by the Spider again and also unlucky enough that John was nearby with the camera. I’m getting used to seeing that bike on top of someone! 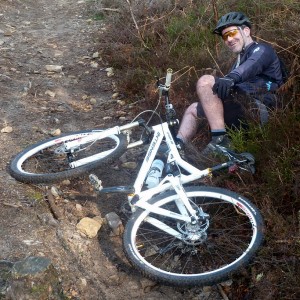 Barry Knows Best was a real hoot and with Big Al, Dom and Young John showing me a clean set of wheels I could ride at my own pace without distractions, yomping it over the several jumps down the trail. Woodland management has also taken place along here so some sections I thought were a bit dubious with piles of logs in close proximity to the trail but the run was as exciting and enjoyable as ever. The end section has now been coralled with a simple fence to stop riders hooning straight out onto the bridleway which is probably for the best as it doesn’t detract in any way from the trail itself.

After sitting in the Spring sun enjoying cheese straws and a nice filter coffee we started our run back. I was expecting to see those cheese straws again on the climb up Radnor Road but once again my roadie miles kicked in and before I knew it I was at the reservoir. It was the easiest time I’ve ever ridden up there. We then started on Reservoir Dogs in the reverse direction and picke dup the tail end I think of Surfa Rosa before starting that cheeky trail I mentioned one more time.

This time I had a bit more traffic so the whole thing was a touch slower but I had the benefit of knowing it too so enjoyed it just as much. At the ponds we turned toward the Youth Hostel and then down and back to the Volunteer. The route back was largely a retrace of the way out, only with a lot more climbing. First up Raikes Lane, then across the Roughs and finally up the long White Down ascent. The secret is to just keep spinning and in my case, starting putting electrolyte tablets in your Camelbak! I’ve been trying the Zero tablets in berry flavour and rate them highly as after yesterday’s ride I was feeling very comfortable.

In all, we got back to the Bockett’s Farm car park with just under 30 miles on the click at around 12:30 which I think is a good effort for such a long ride. Thanks to Big Al for the new trails and route finding and thanks to all for a great morning. John’s added so pictures of the morning to our Flickr account.