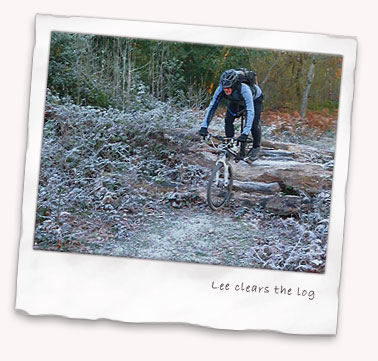 This ride saw Big Al joining us. I later learned he usually rides with the Dirt Devils, a group Matt and I met years ago…

So on a cold, frosty morning we assembled in the normal place looking forward to lots of frozen ruts and a general lack of mud. We weren’t disappointed.

I met up with Colin, Lee, JohnR, PaulM (he was in the car park before me!!!), BigAl, Ray, Kevin, Tony Tumble, and if I’ve forgotten anyone I apologise and I, uncharacteristically forgot to take a head count! I’d also uncharacteristically published a route plan on the forum giving a taste of what I had planned which was enough to persuade Colin to head out with us rather than doing a dawn raid to Pitch Hill.

So we headed over towards Polesden option to take the first left under the Stone bridge. Conditions were CRUNCHY, offering plenty of grip if you had the bottle to go for it. Big ruts were the main obstacles to watch out for. Given the frozen conditions I opted to take the middle option from the Youth Hostel and we rode this all the way to the Ranmore Road, something I’m not sure I’ve ever done before and if it hadn’t been frozen I think I can see why!!

From there we headed to Abba Zabba via the normal Badger Run and Collar bone with Lee having a comedy fall on the log roll before showing us how it should be done and Colin following him over. At Abba Zabba itself Colin showed the way with Big Al following, Lee breaking his cherry and then Kevin had a crack, but I think failed. Tony (pre tumble phase) and John both did the drop only (apologies if I got that wrong! Correct it in the comments!).

From there to Blind Terror 2, with Big Al again showing how it should be done, followed by Colin. Tony adopted the Tumble label from here on! We took the easy NumbSkull drop which was made more exciting by the leaves and then we headed over the road with Colin and I heading into the Blind Terror complex which is just such a hoot in my book. 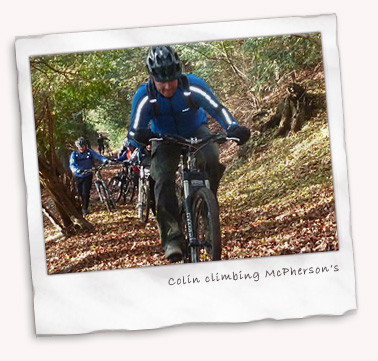 The McPhersons climb beckoned and it was here that I really became aware how tired a lacking in energy I was feeling but the climb seemed to evade most riders with the possible exception of JohnR. Quick climb on the road and then we took in “And then there were three” which I enjoyed immensely and managed to stay on the bike which is always a bonus. Tony put a another tumble on the side of his frame.

Up Box Hill towards refreshment we said “Goodbye” to Colin at the bottom. Lee wondered about China Pig as an option and given the amount of grip we’d found so far we decided this was a reasonable option so after tea we head that way. I treated it with a bit of caution, possibly holding Big Al up but I couldn’t shake the weird feeling generated by the crunching of ice particles under the tyres even though I didn’t slip once.

JohnR and Paul peeled off at this point while the rest of us headed back to Norbury, taking in Infestation on the way back to the car park.

Really great ride but I have to admit to being totally exhausted by it all and looking for for a long sleep!

Check out our Flickr pages for some photos of today’s ride.

Filed under Rides in November 2010