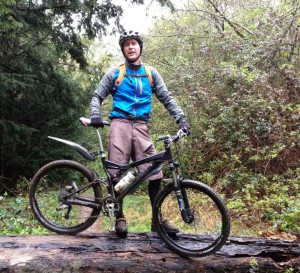 Looking out the curtains this morning it certainly wasn’t a pretty picture. Horizontal driving rain sort of sums it up. However quite a few riders had said that they were coming out no matter what the weather (you know how you are Karl and Danny!) so I headed out and as usual the first foot out of the door was the hardest…

Spinning up to Bocketts (unusually a lovely tailwind) it looked like the other riders had already gone but as I got closer I realised that lurking in his Vdub was MarkyMark. As I knocked on the window I’m not sure whether he was pleased to see me or not! He was was about to give it a miss and go home.

As we headed out the rain wasn’t coming down too hard and out of the wind it felt quite warm, but in the NE wind it felt raw. Definitely not a day for mechnicals – so fingers crossed no stops!

We spun up to Admirals trackway and it became instantly obvious that we wouldn’t be setting any Strava KOM (even if we could) times. Although the ground was still reasonably hard, the top inch or two was pure gloop, with all roots being slippery as….. and some of the largest puddles that either of us had ever seen on the Admirals trackway. 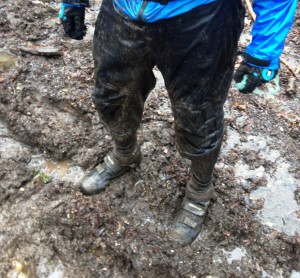 Given the size of the puddles on the trackway we headed into wiggly woods, which was far slower than normals, then as Mark suggested, we headed to Polesden and up to Tanners hatch, then Ranmore. The bottom at Tanners, was ultra muddy and sketchy but the road from Tanners to Ranmore was great with a tailwind. 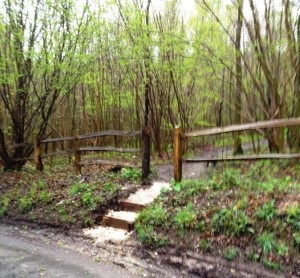 Next instead of going to Landrover or White Down we turned off at the top of the downs past the scout camp and tried to control our speed as we slithered down Scouting For Boys. A first for Mark since it’s one of the local trails that most of the other moles don’t seem to like. Some of the huge rain ruts seemed to have been levelled but it was still a question of controlling speed more than anything else.

The next part of the ride was a moles classic, as we tipsy toed across the railway line, headed through a massive puddle in Westcott, then up to the Rookery and Wolverns Lane. Along Wolvern Lane it was definitely a question of avoiding the lane itself since the 4×4 puddles looked bottomless.

Spinning along we turned off at Tiling Bourne, down the tricky descent under the trees and then turned left, up what was basically a stream, to the bottom of the Leigh Tower hill. The final climb to the tower looked impossible so we skirted round and popped out at the Tower.

The weather at the Tower was grim. Waves of rain pushing through on the strong winds and unsurprisingly there was no queue for cakes. In this weather the new double glazed window at the tower looked a good option for the cafe owners! As we paid for the cakes the lady obviously took pity on us and offered to let us into the tower to keep warm. It took us nanoseconds to say yes. 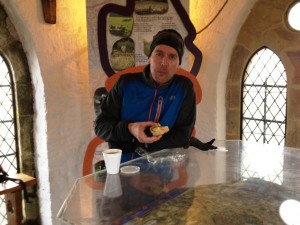 Once we’d dragged outselves out of the snug we rode around the tower and a gust almost blew me (not an inconsiderable feat given my mass!) off the bike. It was clear that we were heading back into a headwind, as we plodded off to Waggledance, Summer Lightening and Wolverns. The rain was really coming down but soaked shoes and flithly bikes/bodies could not deminish our enthusiasm as we maxed outselves out as the conditions allowed.

We crossed over to Westcott again and spun up High med, then retraced out steps to Ranmore, Tanners, Polesden, Wiggly wood and Admirals trackway. 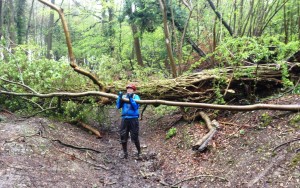 As usual in days when the weather was grim, once you were out in it, it wasn’t too horrible. Goretex and mudguards (my lovely new MuckyNutz Fender Bender getting it’s first test) are great and as long as you aren’t cold, rides like this are extremely enjoyable. The Moles hidden under the duvet really missed out!