Today was the last official Moles ride of 2012 – and what a year it’s been. Wet, mainly, it must be said but we shouldn’t forget how spoilt we were for the first months of the year where the end of a long drought led to us riding through dust in February and into March.

In fact, some of my fastest times this year were set in dry, frozen February dust…

But how things change. From April onwards, it’s been wet. Very, very wet, to the point where the MuddyMoles more than earned our name. So what could be more natural than for our final ride of the year to be exceptionally muddy?

We had just five riders today – DaveW (fresh from an epic year of mileage), Big Al on his equally large Lurcher, AndrewK, Dandy and myself. All other moles were either sensibly holed up in their burrows, suffering injury or required elsewhere.

We set out with our classic Newlands run in mind and were soon into the mud, getting passed by multiple MX cross bikes on the Admirals Track who thankfully resisted the temptation to shower us with mud and water from the epic puddles. We were lucky – we could have ended up like this: 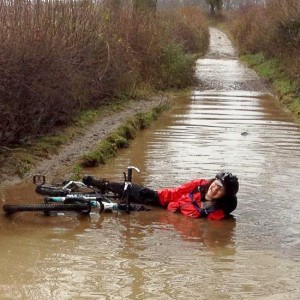 Soon we were heading downhill toward the Yew Trees climb,being extra careful on the unreliable surface. After so much rain the trails have lost a lot of the wet over hard top surface and are now very greasy with lots of soft clay.

At least today we had the weathe ron our side. We’ve all spent days this past month looking out the window feeling the weather to be just that bit too miserable to venture out, only to find by early afternoon that the day was getting dark already. But today we had clear skies, a bit of bluster in the wind and sunshine washing weakly over the land before us. It was lovely to see.

By the time we reached Ranmore a brief shower coincided with a short wait for Dandy to catch up, after which we pressed on wondering where the rain had come or gone to.

Badger Run, followed by Collarbone gave us Surrey clay at it’s worst. Deep, slick, sticky and sapping mud which had us slipping and sliding along the familiar trails. It turned Collarbone into quite a technical trail as Al admmitted to us, making line choice and the judicious use of power a difficult balancing act. I really enjoy this kind of riding!

After that we headed through Trouble in Paradise and on toward Abba Zabba. I think we were all a bit cautious as to be honest wet clay and roots on a steep incline is not a great recipe. We took the chicken run round Abba Zabba, stopping briefly for a bit of trail tidying. Things weren’t too bad really but they turned a whole lot more interesting as we headed into the Blind Terror roll in down to the road. I was leading and had a huge wayward moment with my rear wheel on the wet leaf strewn slope. Correctly quickly for this led me to take a less than optimal line down the rest of incline, with Dandy flapping both ends of his bike behind me and the rest of us struggling in equal measure.

After a pause for thought, our thinkage led us to press on to the rest of the Numbskull Woods. The first majorly rooty roll in led to me rear ending DaveW who had taken evasive action himself to stay upright on the lethal roots.

From here we split, with three riding to the left, and Andrew and myself deciding right was the way to go. We picked a nice, careful line down to the lower section, after which we linked up with the others and let Dandy choose a nice, circuitous, flowing line down to the road.

Glad to still be in one piece and uninjured, we pushed on to the Abinger Roughs. I like the roughs as they tend to be drier due to the sandy undersoiil and there’s plenty of routes through it. We took our usual route across and were soon riding into Abinger village and from their on to the back end of Gomshall and Shere.

The riding was good as by now we were resigned to the wet, we were warmed through and making good progress. With familiar trails leading us onward we were soon crossing the sandy heaths of Albury, pausing now and again to give horse riders a polite berth.

What eventually faced us was Water Lane up to Newlands Corner. This is our least favourite climb I think, with Al in particular voicing his lack of enthusiasm. DaveW simply disappeared up the trail ahead as Andrew and I dug in to the climb. Honestly, one minute Dave was there, the next he just dissappeared! Eventually I managed to pull into second place, helped no end by the sanitising that has happened to the notoriously technical mid-section. All the way up instead we had soft, gluey chalk instead to suck at our wheels.

After all that it’s only fair to reward yourself isn’t it? In my case, a bacon and egg roll and coffee rather than my usual Eccles cake, huddled under the canopy to keep from the blustering wind that often sits around Newlands.

After a decent pause and chat we headed back toward Bookham along the top route (North Downs Way), at a comfortable (read: slower) pace, with us all weighed down by our top up of carbs and protein. I enjoyed it. The trail was soft as you have probably gathered by now, and we picked our lines through and round puddles, the front wheel occassionally disappearing into the gloop with a quick sideways slide, soon to be followed by an extra quarter turn of wheelspin from the rear wheel to push though.

The rest of the rid epassed in steady comfortable riding as we made inexorable progress toward Ranmore. Once there it was time for Dandy and I to introduce our fellow moles to Rip Van Winkle, bringing us down through the Ranmore scarpment via and splendid narrow trail through the woodland with a few spots proving that stopping is much harder than keeping the wheels moving and steering a careful line.

Grins all round from that (and a wish for drier trails) as we ended the trail and exited by Tanners Hatch Youth Hostel. We headed on down the hill, skittering over the rooty trail and skirting walkers making their way up the hill. One final steep push took us up the trail we normally come down in the dead of night and onto the Polesdon Estate.

We were soon home, via the same wet and muddy trails we’d headed out on a few scant hours before. All in all, around 24 miles from the Bockett’s car park.

I really enjoyed my ride today, getting some brief winter sunshine, tackling some treacherous technical riding and sliding through vats of mud with some good company around me. A day the Moles were truly muddy moles.