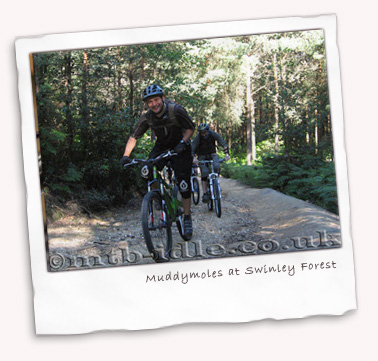 In the harsh early morning sun and rising temperatures two gangs of unshaven men faced each other in a dry and dusty car park in Bracknell Forest. Clad in baggy shorts and t-shirts, protective knee pads and helmets, they unloaded their expensively customised two wheeled chariots and prepared for the immense physical challenge presented by the mountain bike trails of Swinley.

Well all right, we met up to go for a bike ride as usual. Initial interest had been limited, so Dandy Andy agreed to combine forces with the DoMTB group, which by coincidence was also planning a visit to Swinley on the same day. However, with the weather improving during the week, interest burgeoned until 23 riders had said they would come and I think on the day, there were even more.

Comments abounded in the mountain bike online community in the days before the ride, as the once small group that planned to meet early to avoid the crowds became a crowd itself; no doubt other riders planned to come later in the day to avoid us!

Anyway, given the huge numbers, we decided to split into separate Muddymole and DoMTB groups, with the DoMTB group being led by local lad Warren and the Muddymole group being led by myself and Colin (following a mixture of Warren’s normal route and Colin’s internet sourced sat nav route). Moles present included Tony, DaveC, Colin, MarkW, Keith, Jem, Andy661, D’andy and myself.

The groups left the carpark about 5 minutes apart, but we soon ran into Bus from the DoMTB group, looking for a couple of riders which they had already lost (they had a considerably larger group).

The route finding went well considering Colin had brought the wrong back plate for his satmap and so it had to remain in his pack most of the time and I hadn’t been to Swinley since a very early ride in midwinter. We headed through the undergrowth to pass the main DoMTB group and then on to the trail with the little ‘shore bridge and into the recently refinished trail leading to the Tanktraps.

For those to whom these monikers mean nothing, Swinley Forest is quite a small area – maybe 4 miles square, interlaced with a labyrinth of windy, swoopy buff singletrack, over roots, down bombholes and dotted with the occasional jump, roll in and drop off. Any such obstacles on the main trails are rollable, but there are also some more challenging optional sections, including up to 10 foot drop offs and also a few nicely kept larger jumps, doubles and table tops, notably those in the ‘Jump Gulley’.

From the Tanktraps we headed back to Lower Star Post and then off on a loop around the western part of the forest, before returning and taking an alternative trail to the Jump Gulley.

Here I made the first run over the jumps from our group and my recent coaching experiences were obviously paying dividends as I floated neatly over each jump, getting good air and landing sweetly, with the double at the end proving no problem at all as I landed and swept out of the gulley on the berm. Feeling buoyed by this I went back to the start and had a chat with a few people.

Mark commented that the high, steep lipped table top looked really foreboding, but after my sweet first run I though – nah, it looks okay…. My second run went well until I hit the said table top, launched stupidly high into the air and then lost the plot entirely, landing on the downslope on my chin, elbows and knees…

Somewhat shaken, but also relieved at not having done myself or my bike too much harm, I got up. Some kids watching at the side ran down to see if I was okay and Colin rode down to check me out too. I was shaken and disappointed, but got back on the bike and after milling around a bit thinking what might have gone wrong, I did another run, avoiding the offending high lip and taking the softer line to the right.

I was obviously still a bit shakey as I launched over the double at the end, landing too far down to take the exit, so I pushed up the bank on the left, trying to look like that was what I had meant to do…

Riding along the top I had one run at a drop off, to be foiled by a rider who cut in front of me from the other direction, so went back and had another go and that worked out nicely.

Then I was chatting with a kid on a jump bike about dropping into the gulley from the other side. I’d seen a kid do this on my last visit and it looked doable, so after a lot of faffage on my part and some kind trail sweeping by the jump bike kid, I decided to give it a go. The pressure was ladled on as the DoMTB group stopped along the top of the other side of the gulley to watch and comment.

I had a go anyway and made that work too, albeit not with an ideal line, as my back wheel must have passed inches from a sandstone outcrop on the right. I think the problem was that I couldn’t see the line on the approach, or the marker I’d scraped in the launch point (apparently the jump bike kid had got a bit carried away and swept this away too!).

On we headed up ‘Surrey Hill’ to the reservoir, before entering the ‘expert area’. DaveC led us in here as I always get it wrong, but on this occasion DaveC led us along a traverse and over to the point where I normally end up – at the head of a roller coaster swoop down a hill (with optional high speed drop/jump over a log on the way down and another on the way up the other side.

I could see that the drop on the descent had been built up a bit since our last visit. The DoMTB group had just ridden this and were waiting on the other side, while the moles swooped down and up to meet them. I stopped and walked down to look at the modified drop, before riding down over it and up the other side, launching and landing on the edge of the DoMTB group – again, no pressure, with about 24 riders standing and watching and several taking pictures! You can see pics of Colin, Jem and I going over the uphill jump under the ride report on the diaryofamountainbiker blog.

The groups split up again, but now we were all in this area, it was inevitable that we would keep on meeting. We rode up to the south eastern tip of the expert area, where we have previously seen a fearless Rastafarian launch a 10+ foot drop. I stopped as always to look at these, as I try to develop my riding towards being able to do this kind of thing safely (well as safely as you can do this kind of thing!).

The larger drop is not looking as bad as it used to as the hole dug out at the bottom has been filled in now – in reality that doesn’t make any difference, because you are bound to land further down the hill (unless you are rolling over the lip and straight down into a pile at the bottom!), but it still adds a psychological barrier.

The moles were getting a bit bored by now and perhaps a little nervous as I walked back and forth visualised riding the larger drop several times. I know though that I’m not ready for that one by a long way, so as the others rode off towards the Labyrinth, Andy661 kindly stayed behind whilst I contemplated the middle drop. A much lesser prospect, but probably still involving a 5-7 foot drop into a fast, straight, loose down hill run between trees.

Again, a Swinley Forest youth happened to pass by on his 8” Scott Voltage FR bike and I talked over the possible lines and issues with the middle drop with him. There is a root crossing the approach, about a metre before the edge which I was concerned might kick up the back wheel on launching. He had done the larger one previously, so was not phased by the middle one and offered to demo it for me.

He landed smoothly and I first rode up to the lip and then went back for my proper attempt, which went really smoothly. The landing felt a bit squirelly on the loose dry, gravelly surface, but my head was up and I was looking for the next section, so the bike corrected itself under me and I braked, stopped and pushed back up, buzzing, relieved, pleased – although slightly gutted that only Andy had seen it!

Andy and I said goodbye to my 14 year old mentor and headed off to find the other moles, passing the DoMTB group once again, as they reformed near the start of the runs that lead into the labyrinth. We stopped briefly to say hello and then headed down the left hand run into the labyrinth.

I was really tiring by now and getting cramp in the tops of my thighs, so I changed down to spin my legs more and managed to keep going to the exit where Tony stacked it last year, breaking his collarbone and there met up with the rest of the Moles as the doamb group started to gather there after riding the right hand run over the jumps and doubles.

From here we took the short but hard climb up to the start again. With so many riders heading in the same direction, few managed to ride all the way to the top – even those with the legs for it ended up being blocked by those pushing. I had a lucky run though and made it all the way up, despite being redirected onto the looser gravel. I have to confess resorting to the granny ring though, after the warning cramp twinges I’d been getting.

Our second run down was DaveC’s fave, taking the left hand entrance, keeping left at the first fork and then turning right at the second one. This leads down a slidey slidey, steep descent into a decent run through the woods, rejoining the longer ‘east side’ route out which we’d all done earlier. On the way down I was right behind Tony and he commented later about holding me up, but at some point I passed him and then ended up holding him up on the uphill sections, as the cramp started to get me again.

On exiting this run, I’d had enough, so had no objections when people were suggesting heading back to the carpark. I was quite happy to take the fireroad, but DaveC revealed some good knowledge here and led us via singletrack virtually all the way back – this involved covering twice the distance we could have got back in, but was really enjoyable and made the ideal finish to a fine ride.