Remember I said it would be dry until November? I was a little optimistic.

Not that it won’t happen of course, but along the way I am accepting that occassionally it may rain. A lot. Which it did on Saturday afternoon…

This may have contributed to the fact that Sunday saw just John, Lloyd and myself agree to a ride to Reigate. This was Lloyd’s suggestion as he continues to increase his saddle time after a month of having better things to do. We decided (well, I suggested) we travelled by way of my old commute, which keeps us south of the North Downs Way and brings you into Reigate via Priory Park. I had forgotten what a long-ish route it could be.

In the Before Times I would break my ride at Reigate and spend a day at my desk before trying to stir myself to ride up Gatton Bottom in the evening. With no work to interupt us, by the time we reached the tea room at the top of Reigate Hill we had 18.5 miles on the clock already! But we had fun along the way.

We started by heading up Crabtree Lane. One of the features of my old commute is that it can be either on or off-road, or a mix of the two. In this case we rode up Crabtree to the cottages (via the twisty track through the trees) and then headed to Alfred Pennyworth.

After an afternoon of rain the day before, and being on my hardtail with worn tyres, it was a little lively and needed a bit of care not to go too fast. After an enjoyable run through the woods we came out onto the Chapel Lane, then headed up and completed the final section of Red, White and Rose.

I quickly lost my chain and had to complete it on momentum alone which was a little annoying. It’s the second time in as many days that the chain has come off, a combination of wear and maybe a tired derailleur I think. The SRAM XD freehub is definitely knackered and I have deep misgivings about getting it off easily.

After that we rode down to the A24 and then along the cycle path to the Cock roundabout. From here it was through the Deepdene ‘estate’ (in the grand sense) to Deepdene Woods, which lead us down to the Coach Road across Betchworth golf club to Brockham. Along the way we passed my first sighting of a cargo bike in the Surrey Hills, an auspicious moment! And it was off-road at the time!

Crossing the River Mole at Brockham (and passing the – hat tip – Grumpy Mole pub), we tracked across the fields parallel to the A25, although we could have been a world away. It’s fun to see the North Downs Way from the south, it’s not a perspective we often get because broadly the trail is not challenging for our recreational adventures. But it is covering ground and it all adds up.

Eventually we reached Reigate Heath via a meandering route that has just enough interest to make it enjoyable. The reason I use this route is that especially during winter it remains just about acceptable for mud (but can swamp out in the odd place).

Riding along the tops is just a different ball game when the winter sets in and you have to be in the office by a certain time. Over the years though, and occassionally when I have some space in the schedule, it’s possible to extend the commute a little, which is what we did today. As you can imagine, there have been times I’ve been pretty late in – thank goodness for flexible working!

So from Reigate Heath we crossed the road and were back into the woods, following the bridlepath to the Skimmington Castle pub before continuing on past the equestrian centre and onto Park Lane. This brings you to the southern edge of Priory Park and being part of the vestiges of the Greensand Way remains well drained.

We followed the southern edge of the Park, then climbed up to the gallops and back on ourselves before dropping through the woods to the recreational areas. 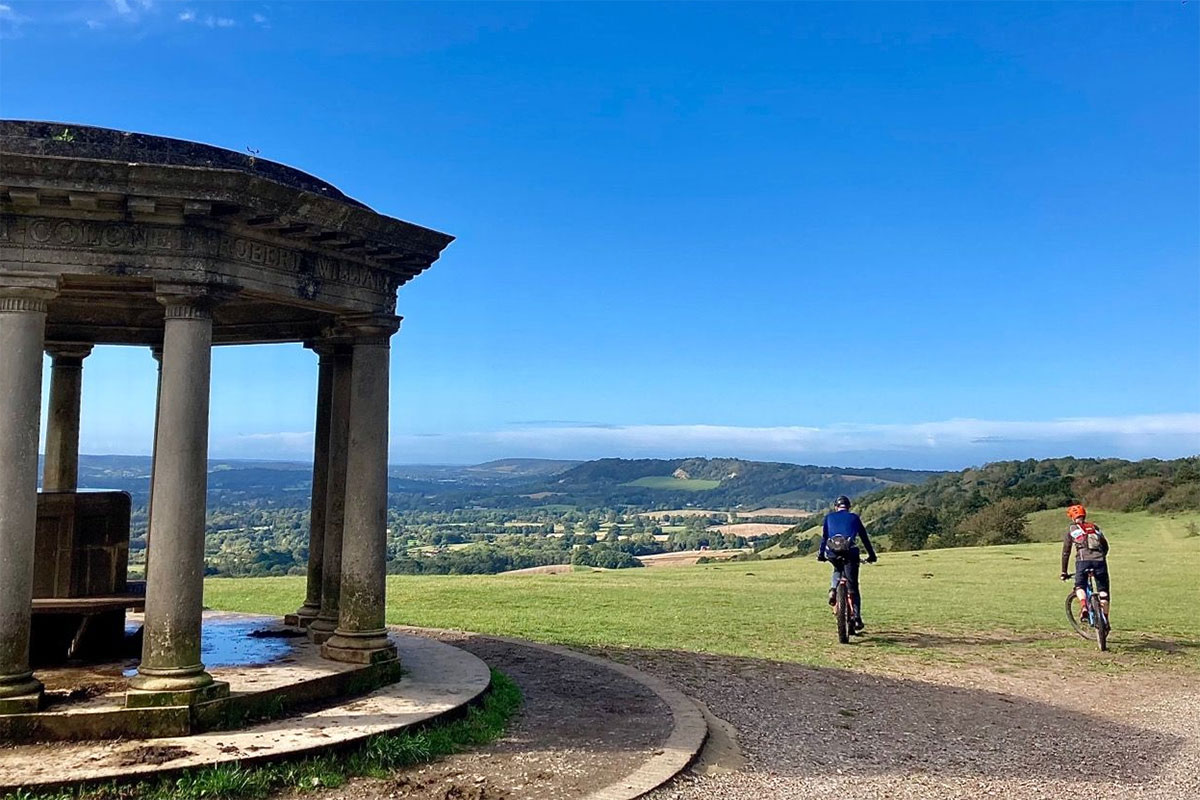 From there we popped out onto the one way system and cut across (under) the castle grounds and worked our way up to Wray Park Road and from there into Gatton Park. From this point on we were back onto our regular Reigate route and the tea room was definitely calling.

To get our refreshment though meant climbing Reigate Hill. I started at a sensible pace but eventually found myself trying – and failing – to catch JR, my heart rate peaking at 173bpm. Even so I finished about 20 seconds shy of my very old PR from back in 2013 and was glad of a chance to sit down – or was that a lie down?.

I have to be honest, I’m not a huge fan of the tea room. Yes, the view is great but the cake tends to be slightly stale and very, very sweet. The coffee is… okay. But even so, I needed the energy today. 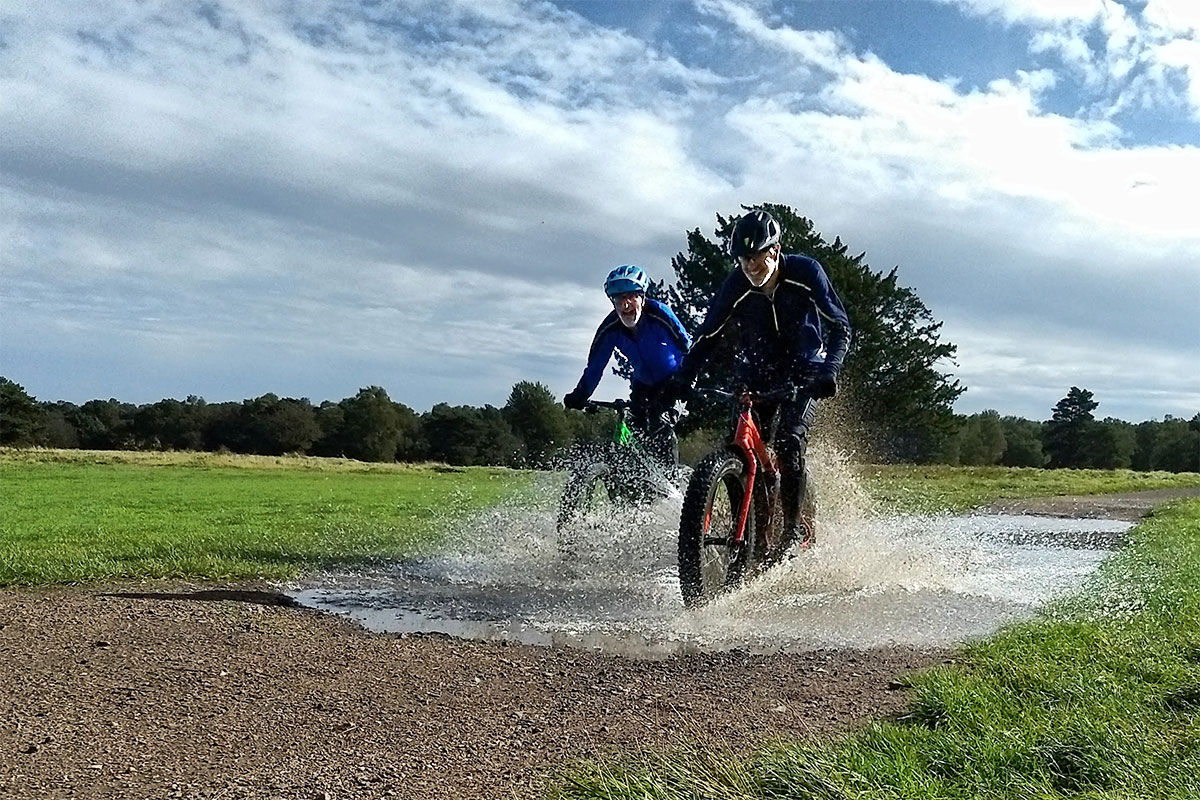 Our route back was classic Reigate routing. We rode along to the Inglis Memorial to find that finally the sun was coming out, clearing the skies even if the wind was chill. Then, over the motorway and into the Mogador Woods and on to the golf club at Tadworth, our third one of the day. Up here you could see the effects of the rain the day before, with JR and Lloyd helping to clear them with their fat bikes. Most of the water ended up on each other!

Passing Headley we picked up Lloyd’s Left Leg. I was glad to go first so that no-one saw the pig’s ear I made of almost the whole trail as the combination of greasy mud and my hardtail created a treacherous surface to ride on. Pot Noodle was a litle better and is probably the first time I’ve ridden it in daylight – if you can call it that under the trees – in months.

We parted company at Mickleham while JR and I headed up to the sawmill while Lloyd headed home.

John once again kept me honest but I was ready to pop at the top as my HR again hit 173bpm for a good part of the final metres. We finished the ride soon after, riding back onto Crabtree Lane after rounding the big field.

My mileage just tipped over 30 miles for the ride but I was really very tired even with the majority of the ride gnarr-free. But then again, all miles count and it was great to try a variation on a familiar route.

Filed under Rides in October 2021