A majority of Moles seem to be suffering from the lurgy at the moment, which left just me and Lloyd!

Undeterred by our own aches and pains, we set out to ride over to Newlands Corner and return via Shere.

Starting at a more civilised 9:00am, we headed out from Bocketts on fairly dry trails.

There’s the odd puddle around but the main issue this side of Ranmore is the mud is claggy, rather than wet. I’m sure it won’t stay that way for long, and fortunately it wasn’t so bad that it completely fouled up the bike, but it was enough that it got a little draggy at times. And my bike now needs a clean.

We weren’t set on breaking any speed records anyhow. This was a relief because although the Yew Trees climb was just as much a drag as ever, at least I didn’t leave a lung behind and we reached Ranmore without burning too many matches.

We headed off along the North Downs Way, with a little bushwacking required as we paralleled Collarbone to White Down and then made our way from the Reservoir to the Drovers Road. 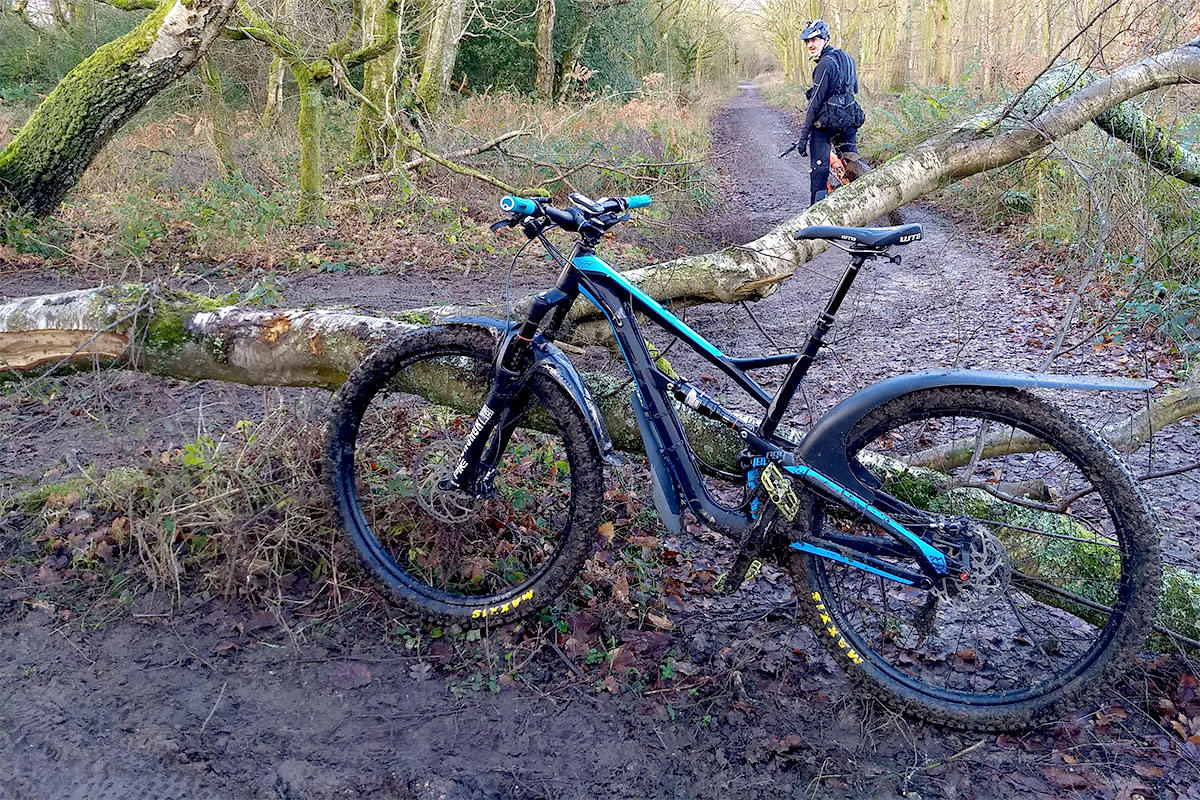 I was a lovely mild morning and I had dressed just right – enough to be chilly setting out but warm everywhere else. The mud along Ranmore was enough to drag but the sliding and slipping remained a fun way to travel. By the time we were heading on the main track to Newlands the surface was pretty good and we made good progress – I’ve seen it worse in summer!

From Newlands we dropped down Water Lane which has pretty deep gullies from the water run off in the centre section – watch out! I had an advantage over Lloyd because he was on his fat-wheeled Trek hardtail while I was svelte in comparison on my 2.5-shod Jeffsy and had the benefit of full suspension. We made our way up Blackheath Lane and then round the back of Albury on blissfully dry and sandy trails.

We hadn’t really seen that many people on our travels up to this point – perhaps a few walkers and trail runners – but when we arrived at the Dabbling Duck for a coffee we’d obviously timed things rather badly and had to wait for 20 minutes or so to be seated in the Yurt. The place was packed.

This meant that when we left after a restorative break I found I needed to carry a previously absent but substantial bacon sandwich with me up Colekitchen Lane! Fortunately our age and debateable wisdom meant we didn’t thrash away at the long climb but kept things sensible with a nice steady effort to warm back up.

Back up on Ranmore we largely re-traced our steps along the Drovers Road, and stayed with that to the Ranmore Road through the notoriously inevitable swampy section.

Our final decision was to take Ricin Beans back down to Tanners Hatch. This proved a good choice as it was running quite freely. Obviously grip is more of a rumour than a fact but with expectations suitably set I really enjoyed myself considering we were riding on the first weekend of January.

Climbing back up through the Polesden Estate at the end showed we had put a good few miles of trail behind us and by the time I got home I had just under 27 miles clocked. At this time of year you have to take your chances where you can given the weather or the dreaded lurgy can strike at any point.

So far so good!