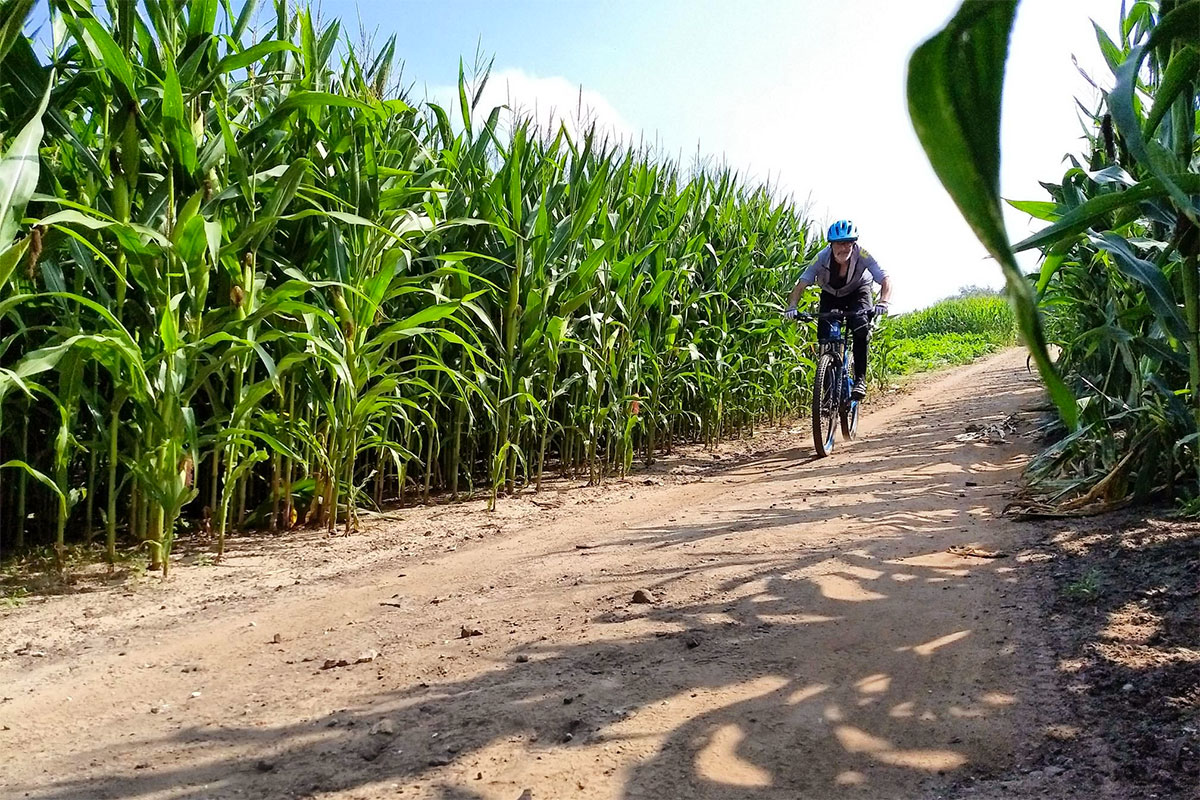 Well here we are in September! And finally some sunshine to help us celebrate too…

Not that there was much sun in evidence when we set out first thing. The hills were shrouded in quite a dense mist when John, Reece and myself met at Bocketts Farm, our depleted numbers the result of Tony out on his road bike again and Lloyd’s continental sojourn. Elsewhere, Moles could be found on a weekend riding break in the Peak District (which looked fantastic btw, even without the skills of the lucky weather gnome).

The ultimate target for us was Shere for coffee but our route to get there was only slowly becoming clear. We started off skirting the big field and riding up Crabtree Lane to the cottages since we haven’t done that for a while. Then it was along to Alfred Pennyworth which is running very well; in fact the trail conditions across the hills at the moment don’t get any better. I’m predicting great riding through to November, and I’m hoping that’s not just wishful thinking!

Next up was climbing up to Ranmore Church along what is now a familiar route, starting on Ranmore Common Road before ducking into the trees by the end of Bendy Wendy; it’s been a while since we chose the alternatives up Yew Trees or the Tanners climb. The sun was still hiding at the top of Ranmore, obscuring views across the Leith but we rode along to Wire in the Blood and then followed Collarbone along to White Down.

Our plans slowly coalesced from there. I say slow, but it was actually quite a steady pace we were setting as we headed down to the Drover’s Road and then on to the start of Sicknote and Helium, a duo of trails I am enjoying very much at the moment while the roots remain dry. 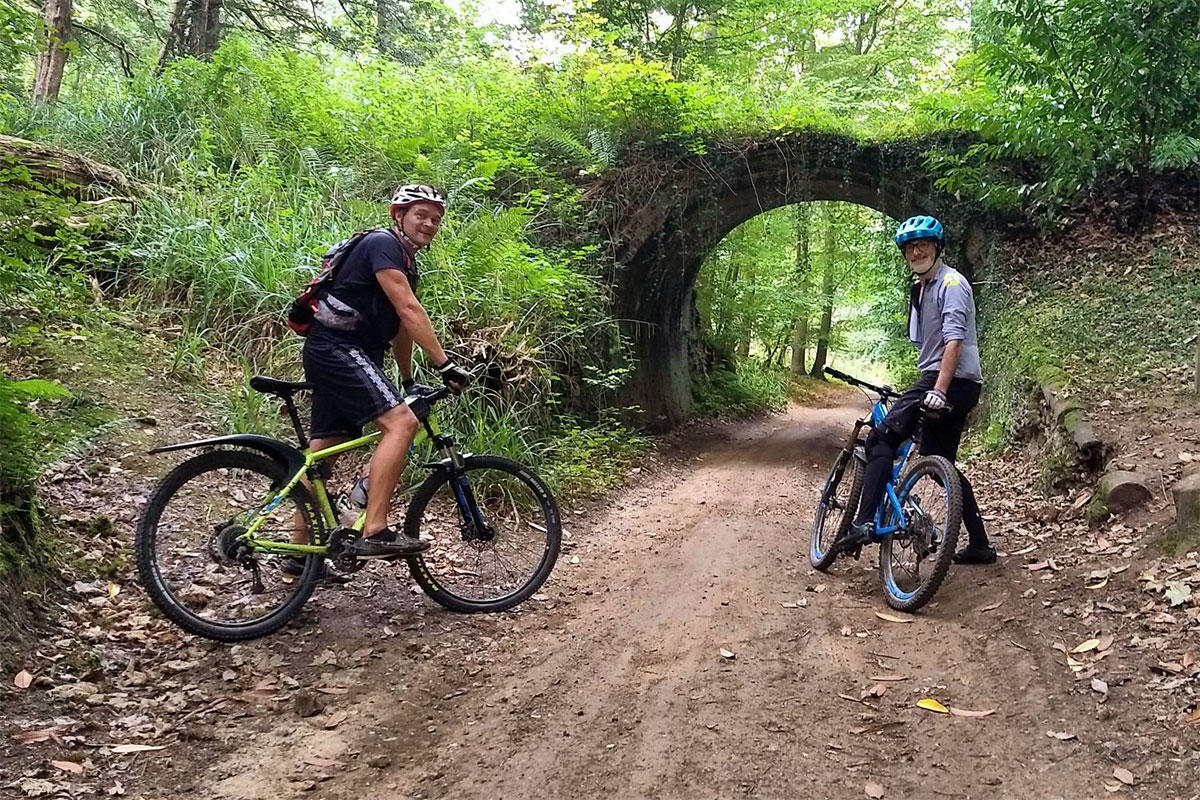 The ever-industrious trail pixies have been out working their stuff and the trees that had fallen in recent winds were magically cut back to clear the way. I went first and had a really good run as I am getting a bit more familiar with what comes next. I really like the odd poppy bit that helps you clear tree roots and the flow feels just right.

At the end of that we bumped into a couple of gravel riders who had come down to the sawmill by the rocky doubletrack, suffering a sidewall cut in the process. I had to point out that with the right bike the trail we had just come down was a LOT more fun! (without trying to annoy them). Actually we had a good chat about what might be needed in the hills and these days I am just as likely to be riding gravel myself.

From the sawmill we decided to include Wonderland in our itinery since we were so close to it. This of course meant more climbing but I was very happy to let John lead the way. I had covered 39 miles the day before and my legs were more tired than I had realised.

Coming back down though – woah! That was fast, from the moment I flew over the angled tree at the top all the way down to the double before the big dip (which it turns out can be done, but braking for the right hander immediately afterward is sketchy!).

Our next treat was more climbing, all the way up from the sawmill to the Ranmore ridge and by now the sun was starting to show itself through the trees. It suddenly started to get very warm.

At the top we rode gently along to the start of Petrol Pump and once again I had the luxury of going first. And again – whoosh! The trail was awesome, but I was taking a few chances and had a few near misses as I threaded myself through the trees. Fortunately with no incident, but near the end of the twisties I did have to stop suddenly with a substantial tree blocking the path.

Our reward was coffee and cake at the Dabbling Duck and not a moment too soon. It felt like it had been an active morning up to that point and I was glad to sit and chat, even if food service was a 40 minute wait that meant I had to pass up a bacon and egg roll (probably for the better). As a measure of how hot it was today, JR fortified himself with TWO cups of tea!

From Shere we had the usual option of the Hackhurst climb and then a run along Ranmore under the trees, but it was such a nice day we decided to go to Abinger Roughs and then run along the bottom from White Down to High Med (avoiding the effort of Hole Hill). Well, I’m not sure if we avoided all the effort – my legs were certainly suffering and it was pretty warm by this stage, especially on the last long drag back up to Ranmore.

We had just about enough energy for our final run, down Rumble in the Jungle which has seen some recent fettling to berms and now features a gap jump over the tree roots as you approach the squeeze from the narrow trees. I was flying and scored a 2nd fastest time (in reality a PR since my fastest time on Strava is actually from GPS drift on the road descent), so I was well pleased with my days riding.

We limped back from there, energy banks depleted, through the Polesden estate to finish. Even the Admiral’s track is currently bone dry and mud free. The final mileage tally from my front door was 27 miles and I did absolutely nothing for the rest of the day!

Filed under Rides in September 2021