Before I write about the Summer weather I’d like to drawer your attention to the Mole image. Our homage to Mr Bradley Wiggins has involved Moley growing the requisite side burns and posing in front of a patriotic triple! 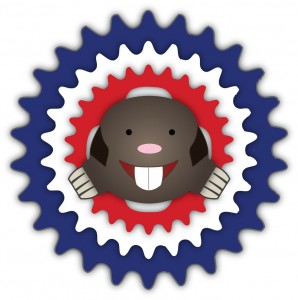 So, first Sunday ride in glorious August, has to be sunny? Wrong. In fact I got wetter yesterday than I did at Mountain Mayhem, mainly due to me sleeping through the storm so Tony may well disagree but I got soaked.

Even with the forecasts 10 of us started out, myself, JonH, Karl, Kev, Andrew, the other Matt!, JohnR, Dandy and DaveW. And JohnR had said a few days earlier that Leith Hill would be a good choice given the sandy, good draining nature of it over there. I checked to ensure we hadn’t left Ray behind and off we went.

Classic sort of route taking in a rather ginger descent down Landrover and the rain was pretty much at a constant drizzle. The track to the railway is getting very narrow as nettles and brambles hang over, heavy from the rain. Flesh takes a beating as thorns rip in and tiny streaks of blood appear on forearms. It’s also mainly a chalk gully so super slippy in those conditions.

We headed over to The Rookery climb and the fast Moles shot off to take on Strava in unlikely conditions it may just be possible to grab a new PB on a climb. At the top no one seemed to have much heart for tricky stuff so we headed up Wolverns Lane and made our way to the top of Deliverance to regroup.

On the way we passed Jess from Singletrackschool who was coaching some 5 attentive cyclists in the art of drops and jumps. I gave the multiple QoM of the area a royal wave and I went passed. This was the first encounter of the day.

Stopping at the top of Deliverance only long enough to regroup we headed straight to the tower for a hot drink and cake. We weren’t exactly broken but we were beginning to wilt a little under the persistant rain. EVEN Kev was beginning to moan.

Quickly home via Summer Lightning was the decided route even though Karl found it hard to disguise his disappointment at the lack of gnar to shred. Personal Hygiene proved tricky enough to get too let alone get down with any degree of control. Half the Moles opted for the rocky climb descent (if you see what I mean). I think DaveW and Karl took on Deliverance but I wasn’t watching! I was just listening to see if I was going to hear the wrong type of sound……luckily they both made it down smoothly.

At the end of the first section of Summer lightning we again stumbled on Jess and co and I was greeted by Sarah who I’d missed on the first passing but is someone who has ridden with Cathie and myself on a number of occasions. Sarah was brushing up on her technique so I hope she’ll make it out on a Mole ride soon! Even Jess was starting to look a little wet and deflated after admitting that her mud0guard adorned road bike, bought purely as an offering to the God of Rain, had failed in the task at hand. Then she blamed science, so I left.

Back down Wolverns lane and I commented on the fact that most of our baggies were hanging slightly lower than normal. Even the very subdued Dandy couldn’t brighten the outlook, especially given he’d turned up with the same Kona shorts on as me. But you have to laugh. Don’t you?

Well I nearly didn’t when Karl’s tyre let go heading up Low Med but by that time the rain had actually stopped so it wasn’t too bad although I had to faff around changing the Mountain Morph head over to shraeder valves. This left 5 of us as the other half headed for home. Funny really, even in all that rain and mud we still enjoyed the ride. Maybe we were still basking in the reflection of bright shiney golds!

I’d like to say a special thanks to my friend Joe for modding the Mole while Matt is away.

Filed under Rides in August 2012