My goodness this has been a long time coming! Some how, shamefully, I don’t think I managed a trip to Swinley in all of last year despite the moles making the odd excursion. Bad timing and bad luck I guess.

This time things worked out a little better and in the company of 14 other moles we had a mass exodus to the famous Berkshire forest. It proved well worth the effort. 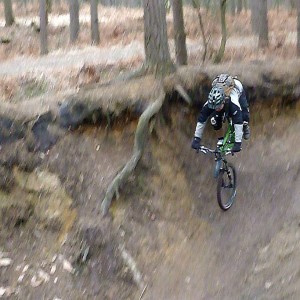 I’m not sure why we don’t get over this way more often. OK, so the winter months play havoc with the trails in general but at least Swinley (along with parts of Leith and Holmbury Hills) drain well due to their sandy surface. We were probably quite lucky as D’Andy reported it being heavy going when he tried it on Monday night but since then we’ve had no rain and a drying wind which has helped enormously.

Meeting at the Lookout car park at 8:30 were DaveC, Jem, MarkT, Colin, Lee, JohnR, Jez, DaveW, Big Al, KevS, BiketechMark (bro-less for this weekend), Nick, D’Andy, StevenD and myself, making 15 in all. Usually this is a recipe for mechanicals and niggles but today was charmed I think. Along with a few others I was worried my lack of layers was just too optimistic since it was decidedly cold first thing.

StevenD had offered to show us round his version of Swinley and since it’s always nice to see how other people string routes together we were all happy to defer to him. Plus I haven’t a clue round the place! And his mother-in-law had thoughtfully provided bread pudding so how could we resist?!

As soon as we set out from the Lookout it was clear the surface was going to be perfect for riding. No need to wash bikes today as the sandy surface – admittedly wet in places – was giving up loads of grip. I’d love to say exactly where we went but will concentrate on the bits I know. There’s probably a lot we rode which should have names but don’t.

First off we were into some familiar contouring trails, straight into singletrack right away. It was to stay pretty much like this the whole ride so Steven did a great job. With the MudXs on my Five I found loads of grip even though the surface was just damp underneath the loam with all the roots being pretty grippy.

Soon we headed down our first descent, wide and whoopy, letting you pick whatever line you fancied really. After some cracking singletrack we soon pitched up at Tank Traps which was riding very sweetly – if you weren’t out on the bike then you missed a lovely Spring day. Maybe it’s the new wheels, maybe it’s the tyres, maybe it’s the recent miles I’ve been doing but I felt just great on the trails. 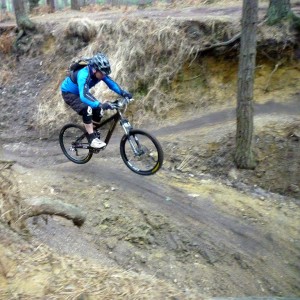 Boosted by that bit of fun it was off to the jump gulley for some early play while the yoof riders were still in bed. Having not been down here for a long time I took it easy but got just enough air to suit me and soon got into the flow of clearing the easy double at the end – easy if you go right of course.

DaveW always likes to have a go down here and scare the rest of us and so it proved. After trying the left hand drops successfully he turned his attention to what is becoming his nemesis, the right hand drop. Fair play for doing it at all in my mind, but as I was returning to the start all I heard of his attempt was the sound of a bike breaking expensively, or so it seemed, followed by an ‘ooooh!’ from everyone else.

Fortunately Dave got the stack style balance about right by making it look worse than it was, but it’s certain he’s got more bruises than the rest of us tonight. Ouch! At least the bike was unharmed.

We pressed on with the Labyrinth ultimately our target after plenty more great singletrack, all sharp uphills and swoopy descents. Briefly we paused while DaveW – remorselessly undaunted – successfully took in a large jump on a steep downhill section, but the pace was good and flowing.

At the Labyrinth complex we tried a couple of things I don’t normally do, first Deerstalker, which was electric fast and huge fun stringing all those open sweeping bends together, then it was an early exit and back up the sharp climb to take in Deerstalker 2.

Another awesome trail, slidey slidey at the top, then opening into more fast berms with tabletops here and there thrown in. One of the last times I was here Tony broke his collarbone and Colin pringled his front wheel (as well as bending a seatpost in the past too) so the Labyrinth needs a lot of respect. Trees are a feature of the place!

At the central crossroads we headed straight over this time into the Labyrinth proper. I’d forgotten what a great piece of noodly uphill this section has, giving you a decent workout if you’re in the mood while still providing plenty of downhill enjoyment. I really felt able to put in some decent effort today.

After all that fun we headed round via Seagull (I think) toward the Corkscrew area. Jem and MarkT decided to bail a bit earlier than the rest of us as the pace increased around Seagull, I was caning it in places which almost had me stacking into an inconvenient tree. With the sun starting to shine I was really enjoying myself.

Despite D’andy’s ambivalence we passed Pip’s f@!%ing seat a couple of times as we found ourselves at the bombhole play area before moving on to Corkscrew. By now I think we were all starting to feel the ride in our legs as for most of us it seemed like a pogo-stick too far. To be fair it’s not in the best condition at the moment but it all felt rather disjointed.

All that remained was retrace our steps in a few places and head back to the Lookout for tea and cakes, making the most of the fact that Swinley singletrack rides well in both directions – and that you can make it up as you go along – to find entertainment in the ride right through to the end.

All in all a fantastic Spring blast in fine weather – we even had sunshine – over some brilliant trails. I loved every bit of the 14 miles we notched today and from the look on everyone’s faces, I wasn’t alone. It was great to finally meet Steven and his mother-in-law’s bread pudding but it was equally nice to see a few faces who haven’t been out with us (for one reason or another) for a long time.