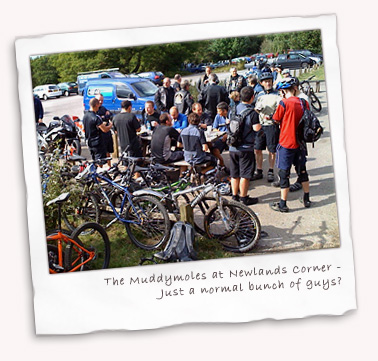 Phew! Another large turnout saw 15 riders heading off on a decent cross country ride with some lumpy bits thrown in. At the end of it I eventually crossed the line at home to record 28 miles – not bad but not as much as some today.

We’d been planning a trip to Newlands in any case but as it turned out I was emailed by Baz at Run to Live (a running shop in Ashtead) to let me know they had a half marathon planned for Norbury Park, so that settled it (Colin will be amused to hear the run is called the Surrey Badger!). Newlands it was then and another of our Moles classic rides was shaping up.

With Colin’s aversion to Yew Trees we headed off up to Ranmore via Ogden Lane, a flinty, loose and overly long green lane that really gives you a warm up to the rest of the ride. It’s horrible, although I was grateful to be on the Five which climbs these tracks well, managing to skim over the worst stuff. Those on hardtails would have found it much worse.

Once up on Ranmore we headed onto Collarbone and over to White Down. Anyone who hadn’t been out on Wednesday night might have been forgiven for thinking we had made a bit of a fuss of the torrential conditions we’d endured. The hard surfaces had failed to absorb much of the rain with the result that they were firm and grippy without the usual late summer dust. Perfect in fact.

With so many riders it’s difficult to know how far or fast to push things (or even to know if we were holding people up) but we seemed to be setting a reasonably brisk pace. Over to Abba Zabba we resisted the urge to stand around offering helpful advice to anyone wavering over giving it a go (I wasn’t going to!) and instead carried on to the ‘chicken runs’ and over to Blind Terror or whatever it’s called now.

Dave took a rather unconventional but successful line down it which I passed on the opportunity of following, so most of us (except for DaveW) headed round to err, Numbskull or whatever it’s called now. These names have now got me properly confused! We need to agree something definitive!

DaveW threw his Five adventurously off the mega steep and rooty bit while the rest of us took the long smooth roll in line which is quite a bit longer than how I’ve ridden it in the past. With no particular technical challenges it’s just fun to roll up the huge bank and back down again.

Over the road and more steep drops and roll ins. For a change we kept the flow all the way down to the road and I have to say it all strings together quite nicely. It’s good to check out what you’re getting into but sometimes it’s just better to let the bike flow. I felt fine with that.

Our next path lead us through Abinger Roughs, again at a brisk but steady pace with the sharp climbs providing enough challenge and enough training for D2D to keep everyone happy. If that’s the right word. After that it was through Shere and round the back to Albury with the big climb to Newlands facing us.

This is another one of those climbs where if there wasn’t a tea stop at the top I’m not sure I’d bother! For a short while all the cheerful banter that had been passing back and forth through the group stopped as we all dug into our own private zones to drag ourselves up the hill. At least there was tea, and cake and bacon rolls and chat to make up for it when we reached the top.

Thoughts were turning to how we’d get back and the first part was the usual North Downs Way toward Dorking. After a few miles though people started to peel off to suit their final destinations. First we said goodbye to Charlie and James who were targeting Dorking, then Jez and DaveW decided to stay on the Drovers Road back to Ranmore. They’d ridden over from Epsom and still had plenty of miles ahead of them.

The rest of us turned off toward Horsley. I was expecting us to head down to the sawmill and then to Sheepleas but Dave took us instead via the long snaking singletrack down to the A246 at Horsley. Wow, what a difference that makes in daylight. I was following Colin who was sweeping his bike up and round the high banks and natural berms and just fell into copying his lines. What a laugh, all the way down to the road, chattering over the washboard roots and careening round the flowing bends.

John wasn’t quite so lucky, pinch flatting his hardtail toward the end of the run. After assuring me he was fine to make his own way home (we weren’t far from his neck of the woods) the rest of us continued. With three riders peeling off for a road tramp back to Bookham it left just a small group of us (just a compact eight I think!) to head toward Effingham.

By now the mileage was starting to show as the ride transformed from a slightly lumpy (and a bit grrr!) XC ride into something more pure. The tracks round here offer plenty of space and easy spinning but few technical challenges which I think suited us all fine. It was a good opportunity to keep the pace up without needing to work overmuch.

On Bookham Common we split for the final time with Eric, Barrie and myself heading into Fetcham while ‘Sergeant Major’ DaveC passed up the opportunity for a quick end to his ride by taking a small group back up onto the hills for a final roll into the Bocketts Farm car park. I still think it would have been quicker for all to have come the way we went but it did have a bit too much tarmac for my liking.

There you have it then, a long ride with quite a diverse group of riders and bikes. I thoroughly enjoyed it and hope I managed to speak to everyone – thanks for the company fellas! Roll on D2D…