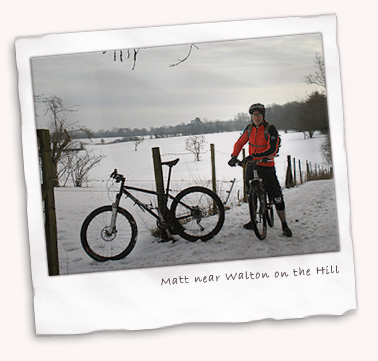 It was a day for spinning, not singlespeeding. It was also a day for the committed and when it turned out only Lee and myself had made it to the starting line, we wondered if being committed to an asylum would have been a more sensible option.

Six days after the snow gods had dumped 13 inches of snow on Bookham and the surrounding area, there was still plenty of snow in evidence yesterday morning as we set out. Knowing conditions would be tough going toward Ranmore we turned our backs and headed toward Reigate instead as I knew from working in that neck of the woods that there was less snowfall. Maybe conditons would be free-er for us? Er, wrong.

Tactical error number one was to forget that to get to Reigate involves (for us) a hard slog up Alsation, followed by an equally arduous effort over Headley. Within a couple of miles my recent cough and cumulative fatigue from regular rides was taking it’s toll—there would be no troubling of Lee’s average speed goals today as Tony had correctly predicted the night before.

Much to my surprise there was still tons of snow on the ground, up to six inches either side of a narrow beaten track which consisted of frozen mud or simply iced up tyre and foot tracks. When it wasn’t frozen the thawing mud was deeply sapping and any trip off line resulted in a huge effort to get going again.

It had it’s moments. Tarmac sections disconcertingly covered in black ice which creaked alarmingly as you crossed them, wild fishtail efforts as we picked up speed on some of the more tightly packed sections of trail, blurred vision from bouncing over staccato ruts but mercifully no tumbles, probably because I was wearing both my knee and elbow pads.

Slowly, as we neared Reigate the ground became smoother and more rideable but still heavily covered in snow. Looking across to the Weald you could see no snow on the lowland at all, but up here on the tops it was still decently covered and it had to be said, very, very cold. We skated over to the tea shop at the top of Reigate Hill, deciding not to throw in the Gatton Park loop we’d intended due to our slow progress.

After a sociable cup of tea and an Eccles cake each we headed back, realising as we pulled our gloves back on how thoroughly cold we’d become. For the next few miles we were shivering away, stopping to take some pics up near the memorial on Reigate Hill until Lee’s hands froze completely, then picking our route back across the golf course near Walton on the Hill.

A surreal experience ensued with no golfers to trouble us, Lee’s attempts to ride the course being hampered by the deep snow. We bounced and skidded our way through deep puddles and pseudo ice-rinks but the track was so open that it was just plain fun, even when I crossed a 12 foot puddle expecting it to crack and it didn’t. Somehow I stayed upright…

By now, tired legs were in evidence as we hauled ourselves up the trail to Headley and I was finding it hard to breathe at times. At the car park, we swung onto Secret Singletrack, surprised to find we were trailblazers as it was obvious no-one else had been this way for at least a week. I guess it really is secret!

The run was over too quickly but was fun and grippy as we guessed at where we thought the line might be. Over the whole ride I was pretty pleased by my Panaracer Fire XC tyres as they generally seemed to be quite grippy for the conditions, possibly even a little draggy. Running downhill past Tyrells Wood, both Lee and myself struggled to top 9mph even when pedalling which shows what the trails were like round Leatherhead.

Onto Alsation and I went as fast as I dared. Things had thawed considerably since the morning climb but not really cleared, so a moment off line would easily have chucked you off the bike and into god knows what. Still it was a blast as usual, Lee admitting he’d backed off a bit behind me, so at least I hadn’t held him up.

And that as they say, was that, 22 miles in hard conditions and an average speed for me of 8.2mph which is a depressing figure. I was and still am completely exhausted from the ride, my legs feel like lead – that’s right soft and malleable, heavy and with no intrinsic strength at all! But I’m glad to say, seeing the rapid thaw today, that we did at least make it out in the snow conditions before they disappeared into folklore as ‘the week it snowed 13 inches’.

I wonder what the next ride will offer us with heavy rain predicted onto already saturated ground once the thaw is through. We Muddymoles clearly chose our name wisely in light of the weather we’ve had in past weeks!