Thursley and Frensham? Should that simply be – bacon rolls without risking getting too muddy?

We are a hardy lot us Moles. But after a particularly gruelling Wednesday night ride in classic BGM conditions along the Ranmore ridge, Tony and I agreed we needed something better draining for Sunday. Especially given the expected rain leading up to the weekend. Thursley is the obvious choice to start from – the area is predominantly sand in one form or another, interspersed with pine plantations and is easy to reach right off the A3.

The added benefit at smack on half distance is bacon rolls at the Frensham Great Pond cafe (coincidentally the road past it is called Bacon Lane!).

But we had to get there first and getting started took an age. Largely due to me; it just took far longer to load the car than usual and I ended up keeping everyone waiting for 15 minutes after a late arrival. In doing so I spared the blushes of JamesW and JamesS, both of whom also arrived late, but not as fashionably late as myself. Thank goodness JR wasn’t around!

Eventually we got going and headed up to Hindhead at a brisk pace – brisk enough (and brutal enough) for me to set some PRs climbing to the still-closed National Trust tea room at Hindhead. People obviously wanted to make up for lost time. Our ride today had the two James’, plus me, Tony, Lloyd and Elliot. 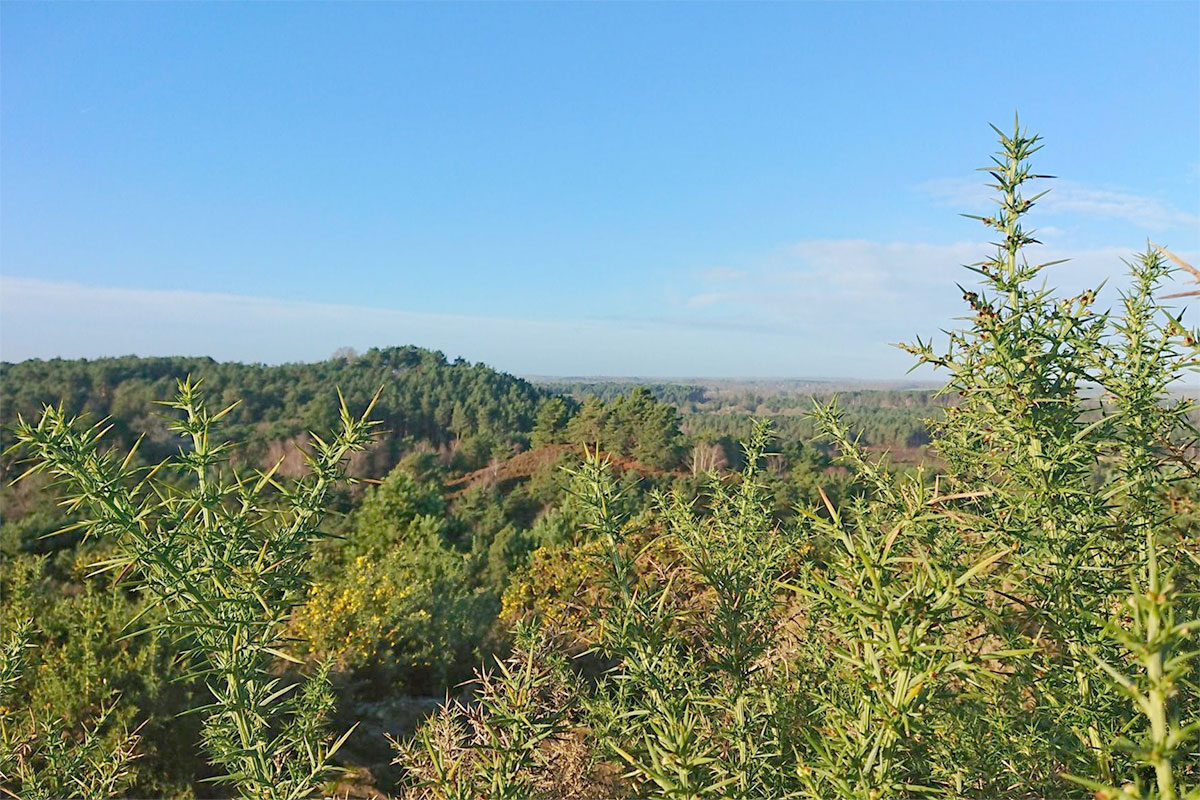 I didn’t really have the legs for it after an afternoon of rain dodging and spinning on my singlespeed town bike the day before. JamesS happened to also be on a singlespeed today, a mono-geared Pace 529 and he made a decent fist of some steep climbs.

As advertised, the route up to Hindhead was relatively dry and sandy and the day was blessed with glorious sunshine, quite a relief from recent days. From Hindhead though, things took on a different complexion. Yes, the trails were basically sandy, but where they were not, and after a lot of recent rain they were prety swampy indeed. But not BGM and that was all that mattered.

It’s downhill from top of Devils Punch Bowl at Hindhead all the way to the Thursley Road. First we went down a path that skirted the Punch Bowl which was easy but – perhaps ominously today – muddy. Then we managed to pick up a different trail on a much sandier surface that suffered from lots of rattly tree routes. This served as a taster for the long, rattly gulley path we picked up next that was enough to give us all quite an uncomfortable workout.

After that we crossed over to the Rushmoor side and navigated our way across the heath, taking in some tough sharp climbs and exploring some descents though the pines before crossing over and making our way to the Devils Jumps. It’s a great lookout but miles below the height of the Punch Bowl. It’s always a challenge heading down from there as the descent is loose and sandy with some big steps to keep you focussed. The easier route is to the left but the path splits and rejoins so much that you still need to be on your toes. 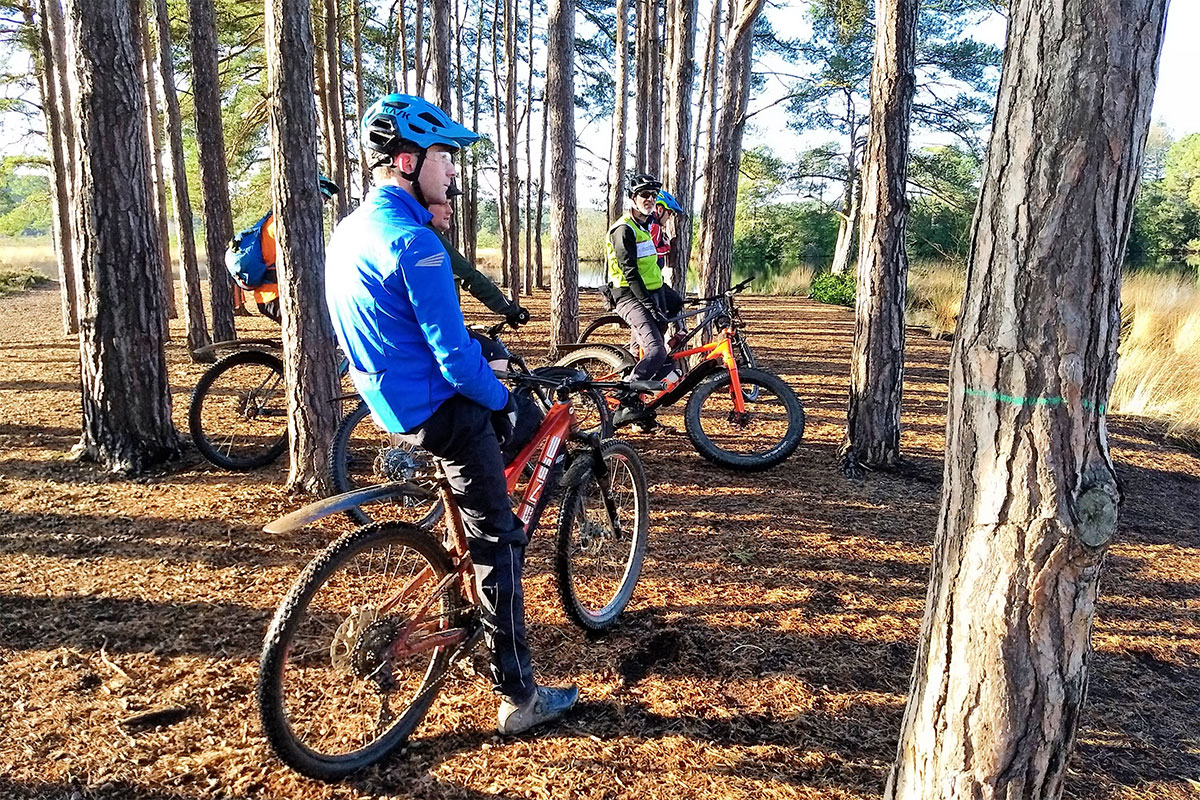 We regrouped at Axe Pond just to check for ice (it had thin sheets at the edges but was otherwise mirror calm), then we were onto Frensham Common proper. A tall ridge runs along above the Great Pond and is quite a slog to climb. Today was no different but with everything super sandy at this point the biggest issue is simply the effort you need to put in.

Fortunately it’s a means to an end. The end being the anticipated bacon rolls at the cafe. Our memories suggest the amount of bacon involved has reduced over time although maybe our expectations are higher or our appetites larger. They continue to score a ‘substantial’ rating from me, a score that is supported by the effort required to ride back up the hill 20 minutes later.

Once we were underway again, our route (expertly navigated by Lloyd today) took us to the Little Pond, then on past Tilford Common and through Hankley Golf Course. Sections of trail gradually started to show large puddles and the rolling terrain was starting to have an effect on my tired legs. It wasn’t just my legs – my chain (and most likely cassette) have reached end of life status and were sounding truly terrible, especially under load and covered in sand.

The problem with my drivetrain is this – finding parts is becoming incredibly hard. I have 12 speed Shimano and a new Deore M6100 is essentially out of stock (and/or very expensive) everywhere. Luckily I have a new chain to go on but I can’t see where the cassette is going to come from. Based on that, I think there will be a growing revival of singlespeeding – I’m tempted to get my On-one singlespeeded once again!

After the golf club and a brief detour to The Atlantic Wall we made our way down a steep drop and across Hankley Common, with Lloyd throwing in an extra drop and a climb which looked impossible to me, especially given the noises coming off my gears. We ended up walking our bikes wearily up; yet Elliot cleared it in a brilliant effort, I was very impressed. 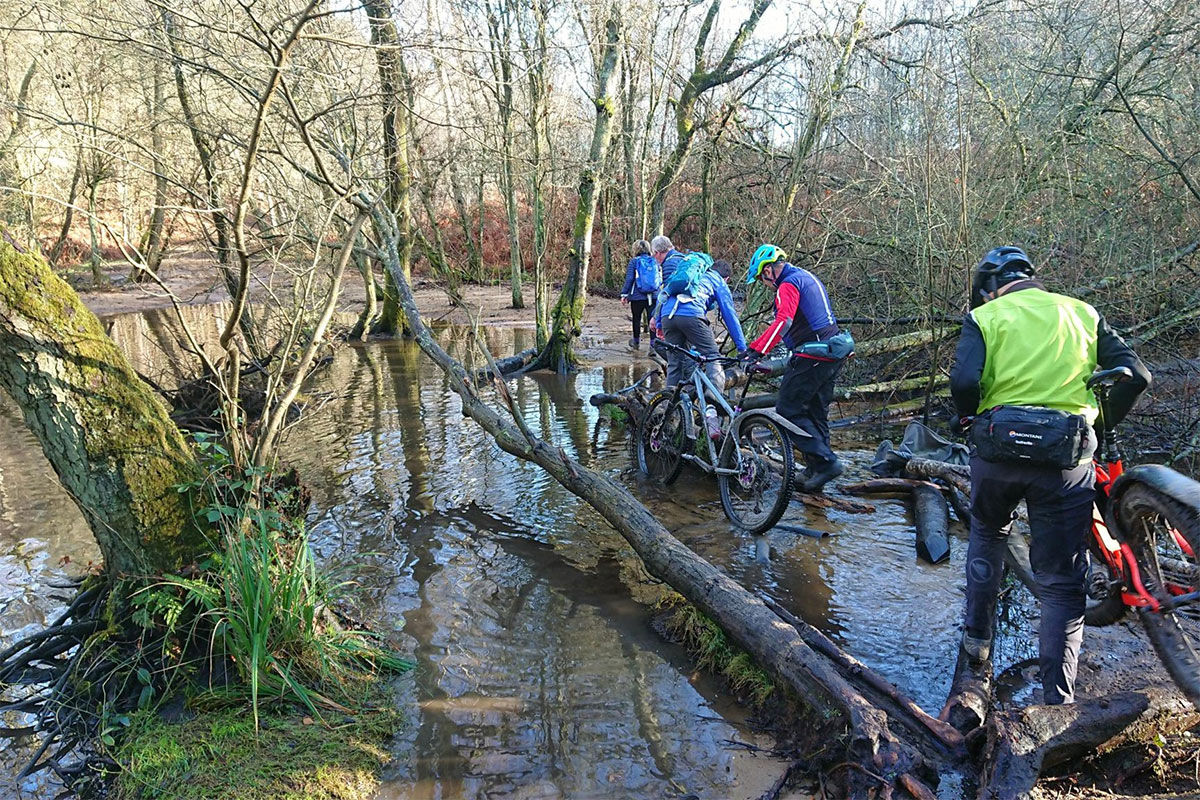 Our last few miles were across Thursley Nature Reserve and by then I was just keeping the bike rolling. I had no real idea where I was, I just concentrated on following wheels in front of me. At one point we found our way blocked by a large lake that a 4×4 driver claimed had been up to his bonnet on his drive through. Casting about for a small coracle, we found instead a tettering pasth across that avoided up getting our feet wet but it was a near thing.

Thursley Common was increasingly muddy, in fact the bikes had suffered for most of our return journey. I have no idea how Lloyd managed to find his way and keep such a high pace rolling all the time. Our last slog toward the car park saw me tucked in behind him and there was no way I could have gone much faster – I was rinsing myself.

It was a comfort as we pulled up at the cars to hear Tony explaining to a non coffee-drinking JamesS the differences between a machiato, americano and a flat white but I may have been hallucinating by then. If I ever need to pass a Surrey citizenship exam though I feel well-placed.

I was knackered; 20 miles and covered in mud and sand, with a bike covered in mud, sand and pine needles. Time to relace the chain and brake pads in readiness for Bike Park Wales this coming Saturday.

Filed under Rides in January 2022