Well, I’m long overdue a report round here and since I’ve been away on family holiday, what better than a write up about a jaunt I did around Malhamdale in the Yorkshire Dales?

I’ve been up to Yorkshire many times, in fact my wife and I feel we know the York and Moors area pretty well. This time we headed to the Dales and what a contrast! The area is very remote, access via the narrow dry-stone walled roads is tricky and the terrain is unforgiving. But it’s a very beautiful area, if a touch on the ‘country’ side for us. Not much chance of a Costa coffee round here!

We took our bikes in the hope we could get some riding in but it was apparent that a four and six year old would struggle, unless you took them up for a tour round Malham Tarn which is reasonably flat. By mid-week though I was starting to champ at the bit and decided to head out at about 8:15 one morning. I didn’t want to push Mark (my bro-in-law and long time Muddymole member) into a corner over the subject but I needed to get out, so off I went solo.

Originally, I had hoped to borrow Colin’s excellent SatMap but his Swinley crash put paid to that as it degenerated into it’s constituent parts. I had to make do with a printed copy of the Long Settle Loop published on the MTB the Dales website with instructions on the reverse which proved tricky but served me well enough.

Things were complicated by my needing to make sure I wasn’t out too long so I truncated the route to just the Malhamdale environs which meant a bit of map-squinting to work out what was what. Starting from Malham itself also meant picking up this route half way round.

So there I was, solo, almost mapless and with a heavy fog shrouded morning concealing the tops of the hills around me and misting up my glasses every 100 yards or so. What could be more tricky? Well, how about trying to do the route on a rigid, carbon forked hardtail with V-brakes and a stubbornly wonky rear wheel? Yes, I could have made things easier.

With Halifax just up the road I couldn’t help wishing I’d brought my Five with me but had to make do with what best suited family riding. Within the first few 100 yards I had taken a wrong turn (which I didn’t twig for another quarter of a mile) and realised that this part of the world means rocks. Large ones, small ones, wet ones and loose ones everywhere, ready to catch you out if you got over confident. 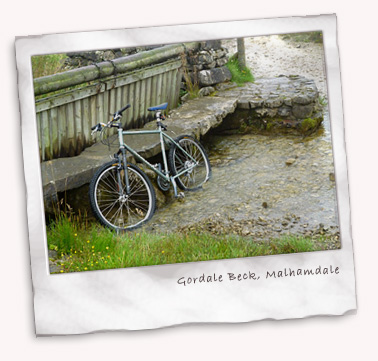 I was grateful I’d fitted a Conti Vert to the front for a bit more air volume but even more pleased I had Dave’s 1.9 Conti Edge on the rear which seemed to be made of plasticine. Excellent for the rocks but must drag like hell in loamy Surrey. Although maybe it’s good on chalk too? Must check out further methinks.

Anyway, eventually back on track I found progress to be both bouncy and arduous. The first three miles out on Malham (in most directions) is uphill and I certainly found it heavy going pinging off the rocks, a real head-down-keep-cranking sort of thing. Stockdale Lane turned into an obscure, over grown track that eventually led to a gate with sheep the other side which gave me my first sheep-poo encounter.

Then, it was back onto the tarmac to grind to the top of the hill up a 14% incline. I stopped twice to check the map and catch my breath, finding it hard going in the humid conditions. The fog was so low I couldn’t see the Malham Lings or the ‘famous’ Cove at all but eventually I reached a cattle grid and picked up some off-road bridleway.

Up North, bridleway doesn’t mean what we think it means down here. We think mud, churned ground and a mix of friendly and unfriendly horse riders. Up there, no horses, no hoof prints, vague tracks and no people anywhere. It was quite spooky venturing off-road on your own with no company, no-one knowing where you were and not knowing what you’d find.

For the most part though, this route doesn’t seem very technical. Yes, a full-susser would allow more comfortable and faster progress but really my rigid hardtail was fine, particularly as with the conditions I wasn’t in hoon mode anyway. A drier day and some company might have made things different.

I negotiated my way to the edge of Malham Tarn, although at the time I had to take the soggy map’s word for it, then another tarmac section brought me to Mastiles Lane, an old monastic road across the Dales. With no clear distance information from the route description I had to resort to taking it’s instructions literally.

When it said follow the obvious route, look out for the sign to Kilnsey and where the walled lane became walled only on the left I found myself constantly having to re-assess what was in front on me. I was, by then feeling very remote and the weather, though warm was definitely closing in. And of course if someone says to you ‘old Monastic road’ you’d start to wonder at how many travellers have struggled this way over the years in harsh weather, never to be heard of again don’t you?!

Finally, the various instructions converged and I turned right toward Bordley, crossing through Bordley Farm which was straight out of Wuthering Heights, all dark, mist shrouded stone buildings with not a soul about but a few dogs barking and a sign on a gate saying beware of the bull.

Ah, bulls! That spooked my properly as I opened a gate and set off along what could have been a bridleway but could just have been a farm track. Passing through a herd of cows I looked closely for udders before continuing across poorly sign posted countryside, round the back of the hill and into God knows what or where.

The field walls looked very old and a bit uncared for adding to my sense of remoteness and unease before I entered another field and found a good number of bullocks nearby. What to do? I didn’t have the presence of mind to look for knackers so assumed they’d be troublesome.

I could see another field parallel across a barbed wire fence so made my way over to that, then threw the bike over and climbed over myself before walking the bike along the edge of the field. All the time I kept thinking, ‘why’s this field empty then’. Fortunately, it just was and didn’t actually harbour a bovine psychopath but by the time I’d got through that I was ready for some respite.

I picked up another track that brought me out at Lee Quarry Farm which was similarly deserted and if possible was even more forbidding in the mist than Borden Farm. But, it was at least on my route home and a quick whizz down the tarmac roads with my V-brakes grinding away finally brought me past Gordale Scar waterfalls and then back into Malham.

My reception at the house was less than hearty as I’d been out nearly 3 and a quarter hours in the middle of no-where and had returned late for an afternoon’s outing, covered in sheep shit and cow shit! What can you do?!

Actually I thoroughly enjoyed it even if I’d only covered at most some ten or eleven miles. I wasn’t technical as such, just kept you on the look out for rocks just under the grassy surfaces, the climbing was a good test of stamina (but nothing like some of our technical climbs) and the downhills were kop-out-but-safe road sections.

If you’re ever in the area it’s well worth trying, get a GPS and pick a long route off the MTB the Dales website. I don’t think you’ll be disappointed.

More photos in my Flickr set of Malhamdale. Mark and I got out the next day and managed to squeeze a pub in too, but that’s another story!