After suffering an annoying head cold for the past week or so I was toying with the idea of not riding yesterday. However, knowing it was MarkyMark’s turn on the tandem with Darren prompted me to turn up just to see some other clown get ‘the experience of a lifetime’ other than me.

Unfortunately, it turned out Mark had a head cold too so decided to pass up the chance and stick to his Spesh instead. Which left an opportunity for Chris to get a go… 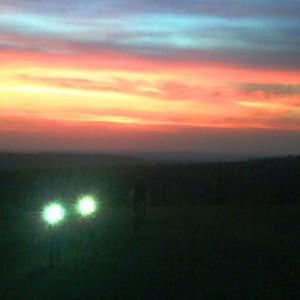 So that’s four riders mentioned in the first opening lines. Actually, I was surprised to find we had a total of 12 out last night – if memory serves they were Darren, Adam, Chris, Rob, Big Al, Gordon, JohnR, Karl, DannyP, MarkyMark, Keith and myself. A big group.

My plan was originally hatched to give a good range of riding with a few changes to our usual trails. It’s surprising how different things can be if you just ride them in reverse! So we set off up toward the sawmill, taking in The Thicket next to Roaring House Farm. My legendary route leading saw a slight mis-turn but it worked out fine with just a minor stack behind from Gordon.

Up to the sawmill then and down past the radio mast at high before before the dog leg turn onto Jem’s Fav or whatever it’s called. Most of the riders behind us overshot by quite a margin and as it turned out were so occupied that they failed to notice DaveC abusing us from the gate further down where he was returning from a ride with Cathie. I didn’t notice either but then I was concentrating on the turn!

We mabled along (as much as I was able) toward the far end of Jem’s Fav, past the end of Druid’s Grove and then had the chance of lengthy pause while Adam sorted out another puncture. Some of the more overdressed took the chance to lose a layer or two as it turned out to be a very warm evening. After that it was a tarmac plod uphill to pick up the footpath past the cottage.

Before that we parted from Gordon who admitted he just wasn’t in the mood which is fair enough. The rest of us were soon into the excellent singletrack, a bit of an eye-opener for Chris on the tandem as I managed to unintentionally lead them through a pretty twisty section.

At the end of this we turned left and headed downhill all the way to the road for a change before heading onto the old Polesdon Estate entrance. This is a gentle run up toward the Stone Bridge where you can pick up the Stone Bridge descent via a couple of routes. So somehow we had managed to work quite a loop in before picking up our usual Ranmore climb past Tanners Hatch.

I was still keen to ride within myself and was more than happy to let others go to the front. Maybe it was the fact we’d had a decent warm up before starting the climb, maybe it was me taking it easier but for whatever reason it seem TOO bad for a change although we were all hot and sweaty as we reached the top.

Now we were up on Ranmore though I didn’t intend to stay up there too long. We headed along toward the Denbies Estate to pick up And Then There Were Three. Thanks to a tip off from Darren we may need to think about renaming ATTWT to something like And Now There Are Four as we followed his advice and took the left hand fork on the final section. This proved be a twisty, kinked trail that brings you out on a short section of bridlepath. Veering left and then picking up the next deer track on the right gives another 200 yards or so of singletrack which has some nice little drops and bumps to jump off before bringing you out onto the track down to the gate near the A24. I think we all enjoyed that one.

So by now we’d reached the bottom of Box Hill although I had no intention of breaking myself up the flinty climb. No, I thought we’d try the grassy climb to Juniper Top instead! I can’t remember the last time we’d done this so thought we’d give it a go. First, we needed a bit of faffage time for Karl’s borrowed lights but once that was sorted it was time to start climbing. 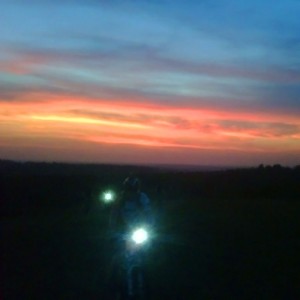 I know this climb is a bit of a drag but I’ll take it any day over the one up Happy Valley. It’s a long plod up closely cropped grass, much like if you rode up Box Hill itself. I don’t think it’s strictly legal though which is probably why we haven’t done it much recently. The ride up was made more affable as we bumped into an equally sized group to us of riders from Reigate (they jokingly called themselves the Reigate Ramblers).

We found them as they exited China Pig and soon sussed who we were when they saw the famous tandem. Well, there’s not likely to be two of them after all is there?! At least not until Adam gets his one up and running.

And rest at the top gave the chance for a bit more chat before we parted ways again, we were Headley-bound. What followed was our usual brisk run across Headley with no mud patches to slow us up we could just blast along. By the time we’d reached the top of the long pebbly climb it was time to try something different, in this case Gear Selecta! in reverse. This proved to be as enjoyable in this direction as it is normally. Ironically, the hard part is at the end with a sharp climb, just as it is in the opposite direction except this time it offered roots and gulleys to challenge us.

Further challenge came a few minutes later as we took the chance to ride Secret Singletrack. I can’t say I found it anywhere near as much fun as usual, partly because the deepening twilight made it hard for me to see without my glasses and partly because it’s getting pretty overgrown. It might be time to retire it for the season.

All that remained was a run down Life on Mars which in contrast to the last time I surfed that in deep clay has now turned into an excellent riding surface. The logs are there to keep you awake – I was nearly caught out – but I had a real blast hustling the bike along there, especially the final slightly uphill section through the trees.

The rythmn was maintained as we finished on Alsation. I again had the privilege of leading as couldn’t believe how fast it felt as I neared 30mph down what seemed to be a green tube. What a blur. Further back, John luckily escaped injury as he came off at speed after a moment of inattention…

The final scores were 21 miles and a late 10:30 finish which might have got a few of the group into trouble. But on the plus side we did have an excellent ride!