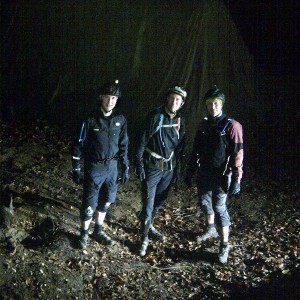 Tuesday night I was out on my road bike, for what turned out to be an unexpectedly tough ride with Barrie the Animal and TonyG. Most of it was spent in their slipstream (or in Barrie’s diminutive case his slip-rivulet) and despite enjoying myself in that perverse ‘what doesn’t kill you makes you stronger kind’ of way it would have been easy for me to stay in on last night’s MTB ride while I recovered. But where’s the sense in that?

The weather was a warm 9° C but there had been light but steady rain through the day so the roads were damp as I rolled up to the garage on my Five, still crackling with mud from Sunday’s efforts. I had at least cleaned off the stanchions, but little else. Making their preparations were Big Al and Danny, joined a few minutes later by JohnR on his Five. Unfortunately John had that sinking feeling as his rear shock had lost most of it’s pressure on the way to the garage after a recent service.

As we set off up Crabtree Lane John’s bike had adopted a distinctly slack attitude as the air can gave up the last of it’s pressure. The upside was a lack of bob on John’s bike but this was outweighed by John’s pedals striking the tarmac as he negotiated a corner! So it was a brief detour back to John’s house for Plan B. His trusty old 1999 Stumpjumper, something I haven’t seen him on for 18 months.

Back underway again I led us toward Wiggly Wood, with a plan for a different kind of route for the evening. After Danny finding the trails in mint condition the day before (bar the odd unforeseen fence), it was a bit disappointing to discover the trails had quickly acquired a coating of grease in the past 24 hours as we negotiated the wood. I had the benefit of MudX shoes but the others were compromised to a greater or lesser extent by their tyre choice.

After the wood we turned left onto the cheeky, hard to negotiate track across to the Crabtree cottage, which has lots of obscure twists and turns, low hanging branches and roots to keep you concentrating. It’s hard to find a flow and will be impassable as the vegetation grows but it breaks up the routine a bit. We then turned up from the cottage toward Polesdon, discovering for the first time how slick the mud was as we struggled to maintain traction.

After heading down to the old Polesdon Road, with several beat-skipping scares to the heart as we struggled to brake and stay in control we then started on the hardest part of the evening.

I fancied a change to our usual climb up to Ranmore and chose the neither beast nor fowl option between the Tanners Climb and Dearly Beloved. Almost immediately we all regretted this as we were faced with yards of slippery clay which was still solid and sticky enough to clog our tyres. Within a few hundred yards we had balloon sized tyres which slowly dragged more and more as the wheelbraces collected dirt.

What a nightmore slog. It’s the opposite of Tanners really, starting gently and then ramping up as it nears the end at Ranmore Church. There’s a short section of relative relief under the pines where there’s a sweet little bit of singletrack but really the fun is for going downhill, not up.

After that the clag really set in as John, myself and Danny (wondering aloud what he’d done to deserve this) gradually dropped Al on his singlespeed who was probably close to a sense of humour failure. Forced eventually to walk he found his front wheel seized solid with the clay around his tyre and bender fender style mudguard. I guess some ideas work and others don’t; trust me downhill in the summer this is probably a nice descent!

Back on firmer ground we headed for And Then There Were Three for a careful descent down through the vineyard toward the A24, my newly bled brakes working well. Not for the first time I was thankful for mud tyres this evening. It was great fun stringing the sections together, with me exercising a lot of caution at the front.

Crossing the A24 at Box Hill our hearts sank as we got pulled up my the police, thinking we were going to get nobbled over the lack of rear light on Al’s Ibis but as it happened it was a pretty polite copper who asked us to do him a favour and cut our helmet lights when on the road as they regularly got complaints from other road users being blinded! At least they can see us is my thought…

We set off up to the Mickleham Gallops, Danny and I setting the pace with Al probably thinking it would be nice to have gears on his bike. Danny and I pushed on all the way up to the gate to the Gallops, setting a brisk but not flat out pace which for once found JohnR deciding to save his energy after his recent ski trip took it’s toll.

Once across the Gallops (past an highly banked fire from some coppice work) we picked up speed to a comfortable canter and the start of Life on Mars which was back to it’s usual low grip winter surface. We’re now quite familiar with it’s turns but even so it’s a bit disconcerting to be sliding the bike at low speed into the twists and dips. Once again my MudXs did me a huge favour, particularly the top section where I managed to stretch away from Dan as he had to contend with his non-mud Continentals.

Rather than career on down Alsation I suggested a final run into Leatherhead past the jumps Darren showed us last week, thinking it would be largely downhill. Wrong. The best downhill bit was interrupted by a huge number of mountain bikers in one group riding up it, after which we were then presented with the miserable climb up to the Tyrells Wood clubhouse on Stane Street followed by heavy going working our way across to the M25 and the turn off for the bridlepath past the Esso building.

It all seemed rather hard work (and rather less downhill) to what I had envisaged and even the singletrack past the jumps seemed curiously tough. Maybe we were all getting tired?

Eventually we got onto the road, past Colin’s house (I didn’t shine my light in each window, honest!) and then down through the back of Leatherhead to the river. Once across the Mole I could feel myself tiring so it was a case of digging in with the others to get across to Bockett’s Farm and on to Roaring House Farm and then back to the cars.

All good fun but a late finish after 18 miles across the hills. I forced myself to clean the bike at home which meant I finally got in the door around 10:30pm, feeling very, very hungry!