Last night was our regular Wednesday night ride. After a fast blast on the road Tuesday evening my batteries were feeling low but I decided to make the effort anyway and very glad I did.

We had a mix of old and new faces joining us, with Mike, Alan and (relatively new) Gordon accompanying Chris, DaveW, JohnR, DannyP and myself over toward Effingham. 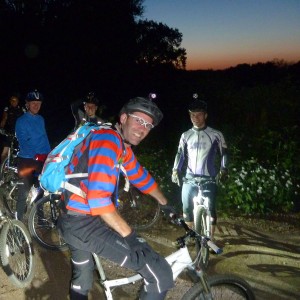 I wasn’t planning a fast ride as I said and so it proved for various reasons but it still felt great to be on the MTB. It’s a cliche I know but when I’m on the road bike I enjoy that and when I’m on the MTB it’s the same. Lucky me I’d have to say!

First stop was a leisurely amble through Wiggly Wood, all the better to warm up cold muscles in what was a cold breeze blowing through Surrey on Wednesday night. After recent gas trouble from various riders it was hugely preferable to suffer a cold wind.

After skirting the farmer’s field it was quickly downhill for a brief burst before a sharp right over toward the Old Dorking Road and into the Polesdon estate. There was still plenty of daylight for us not to need lights at this stage and I was being especially careful not to lose anyone this time…

A short respite at the Youth Hostel at Tanners and then it was onwards and upwards on our routine run up to Ranmore. Knowing my legs were tired I took it pretty easy while some of the more rested in our group shot up the hill.

At the top we all re-grouped before the chill prompted us onward, heading onto Badger Run and Collarbone. I’m not going to comment on the crazy weather that’s gifted us such perfect trails at a time of year when there’s little vegetative growth but I’m getting superstitious about it.

John and I continue to run MudXs and will do so until it’s proven they have no inverse effect on the weather! At which point they’ll come into their own anyway… It’s a little like the story of the guy with a leaky roof, when it’s raining it’s too wet to fix it and when it’s dry, what’s the point?! At the moment those tyres feel great.

At White Down we headed for Trouble in Paradise (a spur of the moment made up name for the huge fallen log challenge) with both Chris and DaveW clearing the mahoosive tree, unfortunately with no sign of a Dandy dance to celebrate.

After that,as the light levels dropped quickly we headed toward Abba Zabba. Chris rode this very nicely while the rest of us took the easier option round the side.

At this point Alan was unlucky enough to suffer a rear wheel problem as it either shifted in the dropout or was buckled on the short drop. With only a 15mm nut holding it on and no quick release he had to put up with uneven braking and the tyre rubbing on the frame for the rest of his ride. It’s particularly unlucky as I’ve been known to carry a 15mm spanner in my larger backpack, which was at home!

Next up was Blind Terror 2 which a few of us tackled, including myself. The compression at the bottom is such I reckon I could do with a touch more platform dialled in to my forks which reminds me separately that I need to strip and regrease my seized U-turn adjuster.

We followed up Blind Terror 2 with Numbskull? or rather DaveW and Chris did while the majority of us stuck to the huge roll-in. Rather than cross the road though as we usually do, John showed us an alternative which suited our Effingham route better. You do remember we were headed to Effingham don’t you?!

Turning right from the roll-in we headed uphill on the North Downs Way and ended up riding along a nice stretch of really simple contouring singletrack across the valley from Abinger with great views across to the Hills beyond. It spat us out at the top of the official ‘bastard climb’ up from Raikes Lane which has nearly killed us in both directions in the past.

Back toward the Drovers Road we went and after a few more easy miles we briefly discussed our options with time getting away from us. We decided to cut short our preferred option over toward Sheepleas and instead took the quicker route to West Horsley which brings you out opposite Dirtham Lane.

I got lucky here as the main group disappeared into the distance while our newer riders wisely decided to stick to what they could see in their headlights rather than chase everyone else. It’s a long, long meandering descent, suited to full suspension bikes only because it takes the edge off some sharp stutter bumps on some root-infested sections.

Having waited at the top to make sure we were all together, I then worked my way to the front of the second pack (apologies again for cutting up Gordon!) before I found an empty trail ahead of me without even a dust cloud to bother me.

Wow! I disappeared off down there at a fair rates of knots with no distractions from trying to follow a riders’ wheel or adjust myself to someone else’s pace. It wasn’t so much a case of being faster than others, just undistracted, and by the time we neared the road I was catching the leaders. Superb fun.

Here we parted from Alan and Mike, as Alan’s bike wasn’t going to fix itself. They headed off on the A246 and it was only later I realised I should have suggested Orestan Lane as a means back to the Lower Road.

Meanwhile, we set off at a brisk pace finally toward Effingham, only to find it was Danny’s turn to suffer a mechanical with a derailleur that looked like it had been whacked by something on the fast descent earlier on. The higher gears were out of reach for it and we nearly lost him a couple of times as a result, even when I stopped to count everyone past and promptly forgot about Danny! It took a half mile for me to realise but fortunately he has better sense than me…

A final run across Bookham Common and we were back in civilisation after 18 entertaining miles. I redeemed myself somewhat by spotting a lagging Danny coming out of Kennel Lane and turning left instead of right and managed to backtrack a good few hundred yards to eventually catch and correct him so we’ll call it quits!