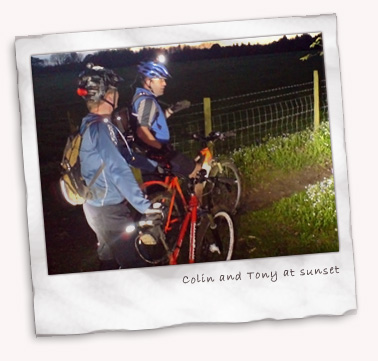 Having missed the perfect riding day that was last Sunday I was determined to get out Wednesday night. It was to be my first ride on my ‘pink bike‘ and despite it being intended for winter use it seems to have turned into my bling bike at the same time.

Our group continues to expand with new riders appearing regularly these days. Last night it was Keith’s turn to take his place as a newbie, joining Dave, Colin, Tony, John and myself on his first night ride.

We set off with the idea of doing our relatively straightforward run to Horsley and Effingham via Ranmore but settled on passing over our usual Wiggly Wood route up onto the North Downs. Instead, Colin (riding an impossibly clean 456 singlespeed thanks to John) suggested The Long Flinty Climb for a change. The reason it was a change? Well, basically I actively avoid this route because it’s er, long and flinty.

With three of us on singlespeeds it was also a bit of a slog. It’s not a technical climb but it does frustrate with lots of loose flints giving plenty of opportunity to spin away power. At least by the time you reach Ranmore on this particular route of ours you’ve pretty much got most of your climbing over, particularly once Collarbone is behind you too.

We meandered over to the Drovers Road up on White Down via a couple of extended breaks, once for Colin and Tony to indulge in some hot pumping action to put some air into Tony’s back end (ahem) and once for Tony to find and remove the thorn that was continuing to cause all the problems. While Tony got an upper body workout, Colin and I walked the massive tree that Mike rode a few weeks back to see what was involved.

With darkness falling and my 100mm travel Inbred looking decidely effette (must be all that pink) I decided that now was not the time to think about riding it. I’m not sure I have the bottle as there’s a big rise to get past on the run in and the need to steer carefully on the run out. Full marks to Mike (and Dom) for managing it.

Onwards. On toward Horsley which is reached via some long trails sweeping gradually downward for a couple of miles it seems. They’re fast but tricky enough to keep you concentrating all the way with patches of deep, soft mud, roots and places where tree felling machinery has cut directly across your path. All the way you’re battered by the wash board effect from drying mud that’s been well chewed up over winter which had me feeling quite nauseous at times. All good fun though.

Then it was over the A246 toward Effingham where we worked our way round via more gently dropping trails to Effingham Station. This is a good route for the singlespeeders really as it just let’s you spin along quite comfortably although you’re rudely shaken crossing ‘that field’ neat the Heath. Ouch!

Popping over the road once more at Effingham station brought us onto Banks Lane which gave us more easy spinning toward Bookham Common and home, dropping off riders as we went. All in all an enjoyable 15 miles or so.

When I got home I treated my Inbred to a wash, curious to know if singlespeed bikes are easier or quicker to clean. Probably not was my verdict as I just spent more time cleaning the bits I suddenly found I could reach without the gears in the way! By the time I found myself getting the brush in to clean the hubs I knew I was being a bit to precious about the whole thing but that’s what cleaning your bike with your head torch on does for you.

Matters might not improve greatly if I decide to ‘invest’ in some of the pink detailing made possible by the folks at Purely Custom. Thanks to Rob for that, I think there’s a fair chance some of that stuff will be appearing at some point!