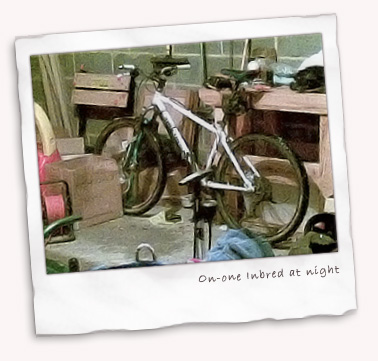 With the weather continuing cold, last night claimed a few victims of the fair weather variety. Actually, that’s a bit harsh as most seemed to be pretty busy elsewhere but it did mean that we had a depleted turnout for our regular night ride.

So it was that Dave, Lee, Felix and myself were the only ones to venture up onto the hills. I’d planned a nice compact route so we had the option of bailing early if it proved too cold or conditions too dicey but as it happened we were rewarded with a great 14 or 15 mile ride.

Starting off with Wiggly Wood my main aim was to avoid the numbing climb up to Ranmore for a change. So, half way down the decent on the other side we turned sharp left and headed toward the house at the top of Crabtree Lane. This in turn led us down the tarmac for a few hundred yards with the mince gland on full alert for ice under the still crunchy snow.

Another sharp left and we picked up the Norbury trail to the foot of the radio mast climb in Norbury, a high speed run in the frozen conditions with no gloop to pitch you off line. Crackling tyres occasionally turned silent under shelter of trees where the snow had failed to penetrate making a staccato soundtrack to our progress.

Once back in Norbury Park we turned uphill, avoiding the radio mast climb for a short tarmac section back up to Norbury House and the sawmill. Here we turned right and took the long, fast loop round and back virtually to where we started, eventually reaching the radio mast again ready for the decent down to the A24.

Here Dave bailed out and the remaining three headed through Mickleham to start the climb up to the Mickleham Gallops where the fast pace and hard work of the previous miles started to show on the long draggy climb. The recent snow was still in abundance and our lights where sparkling off the white stuff. I was hanging on at this point as Lee and Felix stretched ahead although Lee later admitted the quick pace was making him feel sick with the effort.

A final spin over to Nower Wood left us with the run past the golf club and a finish on Alsation which was astonishingly fast. The flow was helped by knowing that there’d be no walkers out past nine on a cold night, the trail was lit superbly by my MaXx-D and I was in the zone, so much so that once again I think I made my bike meow! Lee was in a zone of his own too as he followed me down, mesmerized somewhat by my super bright rear light I think.

Back early for a change (about 9:35), I managed to reward myself with a hot shower, a hot meal and a nice glass of red wine to round out the evening. A great ride.