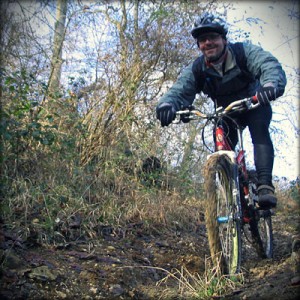 No, your eyes are not deceiving you, and no, Dave has not bought a new bike. Well not yet anyway. What you see here is a retro shot of Dave back in 2003 (when the woods were wild and the Moles only just invented), riding a Marin Mount Vision.

It was the first of many purchases for Dave who has yet to be officially recognised for his contribution toward developing the thriving online shopping channels we use today. So many of you may – I say may – have more money in your pockets today if buying stuff online wasn’t so damn easy.

Speaking of which my Five is about to undergo a heart/lung transplant in the form of new chainset, cassette, chain, front derailleur and cables in a bid to rid me of the approximate shifting I’ve been suffering from for a long time now. More on that soon but first… time to report on some riding on Wednesday night.

Now, as usual there was a Moles ride on Wednesday but I’ve been on a bit of a mission over the past month and a half to get one of the founding Molefathers back where he belongs, in the woods on a bike. This has been greatly helped by a sniff of Mayhem wafted under his nostrils but as we all know when returning to riding, flat out blasts across the Downs with a baggy-forked bike that still only has 30mm stanchions that don’t seem to hold pressure is a bit off-putting.

So I decided to get out a touch earlier for a gentler paced ride with MarkJ, roping DaveC into joining us and sticking to the immediate vicinity for route choices. We kept things simple on a route we’ve done several times recently, round a loop of Norbury, then up to the sawmill and another loop, this time round Updown Wood and back up past Norbury House. Personally I’ve quite enjoyed riding at 70% effort, enough to get a workout without wearing myself out.

The weather was threatening nasty stuff – rain even – but we seemed to be dodging most of it. DaveC was on his Kona Big Unit singlespeed while I was fully tooled up for the gnarr on my Five, if you can forgive the gear issues. We saw two deer standing close together in the middle of the trail in Updown Wood, unperturbed by our approach for a surprising time before they darted off in different directions, while looking across toward Leatherhead and the Mickleham tops you could see the hills lit with the setting sun even as our riding progressed under louring clouds.

Elsewhere, the regular Moles ride was heading out, on a route in the opposite direction, toward Ranmore, then Sheepleas, Horsley, Effingham and back to Bookham. JohnR and DaveW (and probably JonH) were on that one for sure. And finally, under the radar some half hour after that, Lee was also out (was he alone you ask?), for a ride to Ranmore and back.

Back on our ride, we too met up with some old friends as we returned into Norbury Park after an undulating blast along Jem’s favourite. We bumped into Graham and Nick who we normally see on a Sunday somewhere between Bookham and Newlands Corner, so it made a nice change to see them this far east! As we chatted the heavens decided now was a time to drop some water. It wasn’t particularly heavy but enough to wet the trails and as we found out later, even generate some mud.

Getting underway again, we headed down to the A24, then through Mickleham Village to Juniper Hall. The damp hadn’t really affected the chalk too much but it felt a little greasy as we hauled up from there all the way to the Mickleham Gallops, with us all sticking together for an unbroken climb to the top. That’s unusual for us as we normally find various reasons to stop for a breather.

As it was, we stopped briefly at the top and then continued onward. At the end of the Gallops, the bridlepath surface started to change. It’s still very dry, but the top surface felt as though there had been recent rain on it as it seemed a touch slippery. This continued as we neared Life on Mars and my original idea of looping round and doing two laps seemed much less enticing.

As it was I still managed to clock 1:59 along the newly adjusted trail but was giving away around 13 seconds from my all time best. The time was lost in the turns near the top which had suddenly gone from super dry and grippy last week to an unpredictable slither-fest this week, thanks to that rain. Really, it’s laughable to be talking like this as the trails remain so dry overall, but I was starting to feel like a Californian in my approach to damp!

So, a bit more effort was used keeping the bike pointing in the right direction but it was still a lot of fun. After waiting for the Dave and Mark to catch up we set off down Alsation at a speed which managed to speckle us with something I’ve heard referred to as mud. That’s something to tell your grandchildren when you get old(er)!

Back to Leatherhead then for the conclusion of an enjoyable 15 mile saunter round the hills. Elsewhere, more Moles riders were quietly returning to base. As for that picture of Dave on a Marin Mount Vision, well I was reminded he used to have one back in the day after reading about the latest Quad Link 3.0 version of the Mount Vision XM8 today on Bikemagic!