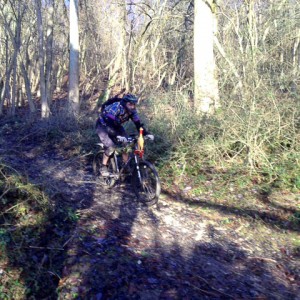 A change of venue for the Moles Christmas lunch saw a change of trails for what is becoming a highlight of the Moles social calendar. Sadly the Friday rain meant the trails were more ‘treacle tart’ than ‘iced Christmas pudding’.  But at least the sun came out for the day…

Apologies for the late write-up, but the festive run-in left precious little time for the usual suspects to summarise last Sunday’s activities. 16 were booked in for lunch at the Stephan Langton in Friday Street, truly in the heart of the Surrey Hills. Meeting at Bocketts were Matt, Tony, JonH, Bazza and myself; along with DaveW, MarkyMark, Danny and Mike who had ridden over from Epsom.

We had arranged to meet Kev, Big Al, Andrew and Lord On-One (Elliot) on Wolverns Lane, so a brisk start was required.  As a foretaste of the conditions to come, the Admirals Track had several deep puddles covering its entire width. I nearly became the first victim to the conditions, when after catching a bar in the hedge whilst riding on the bank to avoid the water, I was pitched sideways into the deep and muddy puddle. Luckily I managed to avoid pitching over the bars, using my instinctive Jedi skills 😉 of dropped wrists and ankles to push the bike through the gloop; phew! That would not have been a pleasant way to start the day.

Around Polesden Lacey and the Yew Trees ascent, we headed across to Land Rover. I’m sure someone had an ‘off’ on what was a very slippery descent, but a week of Christmas parties has dimmed the recall, so they shall be nameless. Mike failed to remain upright as he turned sharp left onto the bottom bridleway, and was the first confirmed faller. 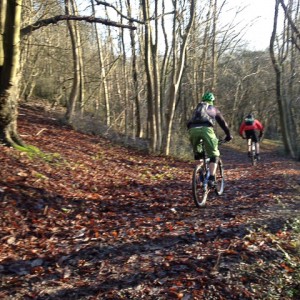 The stepped descent behind Wotton church caused a few to stop and mince down, while Tony turned on the charm to engage the dog walker in conversation about her Border terriers (keeping two himself), before she complained about us riding where we shouldn’t.

The Rookery climb and the singletrack beside Wolverns Lane were duly despatched, and at the crossroads above Broadmoor we met the four who’d started from the pub. We headed towards the Leith Hill tower, via the fun descent at the end of the first section of Summer Lightning. The final pull to the tower caused some amusement as MarkyMark fell off in full view of the watching Moles. Danny attacked the climb, but did have to dab as a root caught him out, and the rest of us had varying degrees of success (or not, in my case). At this point Bazza left us to head back for a family lunch date, having chickened out of the climb 😉

Talking of chickens, I was disappointed to see that my ‘Delivering the turkey’ themed bike, complete with bows and tinsel, was the one and only entrant in the Christmas-themed bike competition.  Must try harder next year, chaps. 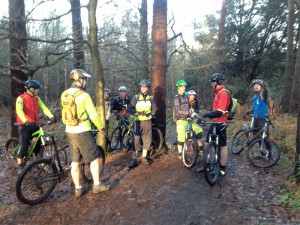 After the cake (thanks, Andrew), we tackled Personal Hygiene parts 1 and 2, then headed past the cricket pitch through the Bombholes to Deliverance. I had quite a sideways moment as the back end of the On-One hard tail kicked out on the slippery roots, but managed to hold it together and arrive at the bottom with the rubber-side still down. I think my tank-slapper put everyone off, apart from JonH, who made it look too easy. The ‘mini Deliverance’ to the riders right became the preferred option for those still at the top of the slope.

A fun descent of a slippery Regurgitator took us on to Wolverns Lane, where we then headed off to some trails that are little known to quite a few of the Moles. On the way to these, however, the mud finally claimed me as a victim, as I stalled on the flooded and sticky bridleway and failing to unclip I fell sideways into the mud. Tony nearly followed me, not because of a lack of technique, but what caused him to nearly fall off his bike was the pathetic squawk from the rubber chicken toy strapped to the front of my bike as it hit the dirt.

After Tony (and myself) had regained some composure we tackled a couple of trails, Slaag and Pedal Death.  The transition from reasonably open trail to dense, dark wood was quite unusual, and the steep drops on the trail caused a few to stop and ‘assess their options’ I think.  I’d led off, hotly pursued by Al and Jon, so didn’t quite see what was happening to the others.  Even Jon had to admit that in the conditions, Slaag was quite a testing trail as he’d followed me down the steep drop off as it hit the final fire road.

Pedal Death (we only rode the top half) was more flowing, and we returned to Wolverns Lane via the play area and Slidewinder, with Summer Lightning taking us back to Broadmoor.  A final road climb and an off road descent saw us back at the pub for about 1215.

Here we were joined by JR and Mrs JR, Mike’s partner and La Dandina, with Karl arriving fashionably late.  The dinner was very good, and the proceedings were livened up with Tony conducting a Moles quiz. Matt took the honours, but feeling like an ‘insider dealer’ he graciously conceded the prize of a Mucky Nutz XL fender bender to DaveW who was a creditable second in the quiz.

The food and drink flowed, and I must say that the quality of the food was excellent, as was the beer and company.  What a fine end to the morning.

Merry Christmas one and all.