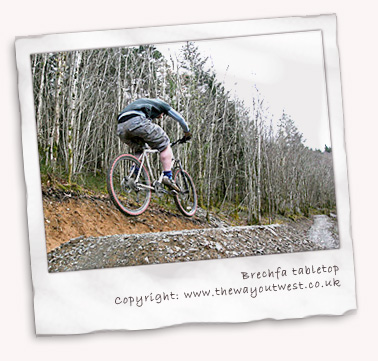 We have history, the Brechfa trails and me. It started well in 2008, Brechfa was Day 3 of an MTB Tour of Wales for my daughter (then 16) and myself.

Back then, we tackled the Red ‘Gorlech’ trail, starting ‘half way round’ at the North end of the trail at a place called Sifigwm. We completed it without drama, and I planned to return to tackle the Black ‘Raven’ trail that was still being built in 2008.

Return we did in 2009, for the Brechfa Enduro. This is basically the Red and Black trails back to back, with a bit of ‘secret singletrack’ thrown in for good measure. I still did not manage to ride the Black Raven trail, however.

Fast forward to 2010, this time I’m determined to tackle both the Red and Black routes ‘back to back’. Again it was Day 3 of an MTB tour. This time it’s the Muddymoles 2010 South Wales tour. Day 1 being the DH course at Cwmcarn, and Day 2 the Doethie Valley and Cwm Rhaeadr. Our plan was to park in Abergorlech at the start of the Red Gorlech trail which allowed those that didn’t fancy tackling the Raven trail to return back to Abergorlech, and more importantly, the superb Black Lion pub.

Just six intrepid Moles started Day 3; DaveC, DaveW, Colin, Jem, MarkJ and myself as sadly Matt ruled himself out of riding with the mother of all hangovers. The trail stats are 19km length, with a more challenging 1071m of climbing. The climbing starts on fire road, and gives a teasing glimpse of the final swooping berms into the river valley at the end of the trail. The climb switches to singletrack, and continues for some time until you enter the forests that Brechfa is renowned for.

Although the trees are mainly forestry commission pines, some of them seem to have been around for a very long time, with the thick covering of moss in the dense woodland lending a primeval air to the trail. A little more fire road brings you out of the trees into to a cracking descent in open hillside. Tabletops, berms and jumps a plenty, with several tree stumps banked with earth to launch off from. This leads into a tighter singletrack which again flows beautifully into the bottom of a valley.

Sadly this only means more climbing, but the fire road makes it a little easier, and before you know it you again find yourself starting another manic descent. Featuring more tabletops, berms and jumps (but no tree stumps), the grin factor was now moving off the scale. More flowing trail with a few jump options and one larger rock step which Dave hit first time, while Colin returned to tackle it with more speed for a more honourable second attempt. The rest of us were content to watch!

With a total of 1071m of climbing to complete, we all knew what was coming next. This time it was an ‘interesting’ single track climb with several hairpins that seemed to get increasingly tighter as the height and fatigue increased. Although it was a typical West Wales summer’s day, i.e. drizzling, the views across the valley were superb. The reward was another swoopy, bermy, jump-laden descent.

Having started riding at around 11am, we found ourselves at the ‘trail split’ at around 1pm. With DaveC, Jem and MarkJ opting for the lure of the pub after a hard week-end’s worth of riding, DaveW, Colin and myself headed off for the Raven trail.

This is a similar trail in length to the Gorlech, but with less climbing (725m) than the Red trail. After some fireroad that contoured the hillside, we hit the singletrack that seemed to go on forever. Although like the fire road it contoured for some time, eventually it headed down. Again, tabletops, berms and jumps were the order of the day.

As I exited the trail, there seemed to be a choice of a rock step that launched you onto the final down slope and exit, or a roll around to tamely hit the fire road. After that descent there could only be one option, and I landed on the down slope to the cheers of Colin and Dave who were watching to ensure I made the ‘correct’ choice.

Ignoring the lure of the Drop-Off bus and coffee’n’cake that waited in the car park in Brechfa village, we opted to avoid the final descent (and subsequent climb) alongside the river, and continued on the trail only to be greeted with some very steep fire road climbing before we eventually hit more singletrack. There were many highlights to these trails, but the flowing single track that dropped slightly to the Red/Black trail split certainly got Colin’s vote, though I confess to backing off slightly due to the greasy conditions and my general lack of bottle.

Eventually we found ourselves on the final run back down to Abergorlech on the massive berms and amazingly mental trail that leaves you grinning like a maniac as long as you’ve safely negotiated your way to the bottom, that is. What a cracking route, and I’m really chuffed to have completed the Raven trail at last.

Some final comments for those planning a trip to Brechfa, virtually all of the trails can be tackled by reasonably competent XC riders. Although I have mentioned a few jumps (ok, many jumps) and other features, all are perfectly rollable. My daughter loved the descent into Abergorlech the first time she rode it, and in my opinion there’s nothing on the Raven trail that will catch you out as long as you ride at a speed with which you’re comfortable.

I was reading a less than complimentary article on the Raven trail in a recent issue of Mountain Biking UK. The three of us that rode the trail would certainly disagree with their comments. The gist of the MBUK article was that there was too much fire road climbing, with the technical sections being at odds with the rest of the trail. In my view you have to accept that if you are going to descend 725m then you have to climb that same amount (or pay for an uplift). The climbs were a mix of fire road and singletrack, and the downhill sections were great fun. As it was signed as a ‘Black’ trail, then that’s what we were expecting.

Also, like MBUK we tackled it on a damp day, and while I confess to a few sketchy moments, the ‘crushed stone/slate’ surface still allowed you to have fun, even if you rode slightly within yourself to avoid too many ‘moments’. I guess this type of surface is necessary given the amount of rainfall the area receives. We’re off to Scotland & Seven Stanes in September, so we’ll be able to compare the two areas and see if Brechfa really does suffer in comparison.

Meanwhile, for those based in the South of the country, I would recommend the Brechfa trails as a brilliant day out for all abilities, but with plenty to challenge the faster riders who are looking for some air time. All rounded off with the superb food and beer in the Black Lion. What a ride to end the week-end on, and we were back in Surrey within 4 hours.