Morning glory, naturally … and what a glorious morning it was, though pretty nippy at the start.  The weak morning sunshine was reflecting ominously off the thin layer of ice crystals coating the road surface that so far was undisturbed by daytime traffic. 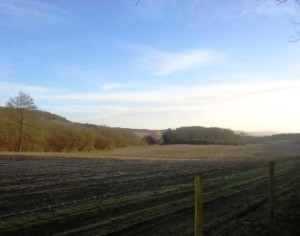 I was glad of the third outer layer as I waited briefly for Tony and watched the commuters passing.  Graciously allowing him time to munch his ‘Elevenses’ breakfast bar (thanks to that outer layer), we headed towards the Admirals Track.  This was the muddiest section of the ride, and despite taking the riskier high lines on the banks, we avoided doing a ‘Lauren’ and having an early bath.

Reaching Polesden Lacey, it was now time to remove that outer layer, with Tony taking this opportunity for a photo of my new ‘waggon wheeler’. Having read a number of magazine articles questioning their handling, I found it very stable on the still muddy descent to Yew Trees. It felt quite lively, and was popping nicely off the lips and roots on the path. 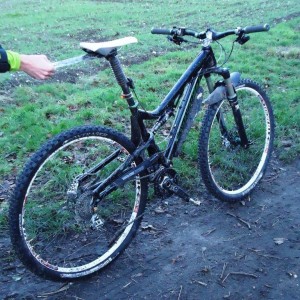 Although nowhere near as bad as they have been, Badger Run and Collarbone were still quite slippery, as Tony found out the painful way. Tony was rocking his Specialized Camber 29er and we had just been discussing how well the big wheels coped with the roots that litter this trail, when … well you guessed it.

Further up the trail, one of the large trees in the middle of the track was split badly at the base of the trunk, and the section above the split was leaning at an alarming angle. Expect to find an obstacle across that trail soon.  As you can see from the blurring in the photo below, I was taking full advantage of the rolling speed of the 29er as I climbed Collarbone. 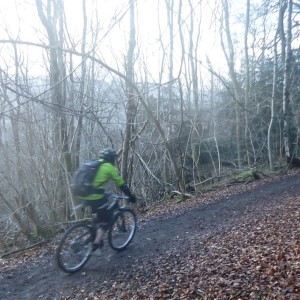 Yet again, I avoided the pile of logs on Trouble in Paradise, though they look well worn these days.  It’s just the general slipperiness that puts me off, though if I wait until they dry out they will have most likely disappeared. Abba Zabba was next up, and although we took the easy lines, the bikes behaved perfectly and coped with the roots with ease.

Heading back along the bottom of the valley, Tony showed off his cornering skills before we then tackled High Med.  After a quick road spin past Ranmore church to the top of the Denbies vineyard, we couldn’t resist a quick blast of Golden Nugget before heading back up behind Polesden Lacey.  Broken ice around the edges of the puddles up on the ridge again showed just how cold it got during the night, but not cold enough for the mud on the trails to freeze. I’m not sure whether frozen mud would have been an improvement on trail conditions? 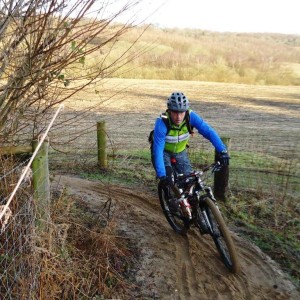 Finally, Tony took all his powers of persuasion to talk me into joining him for a cake in the cafe on Bookham High Street.  Then it was time to head back home, and for the day’s work to really begin.