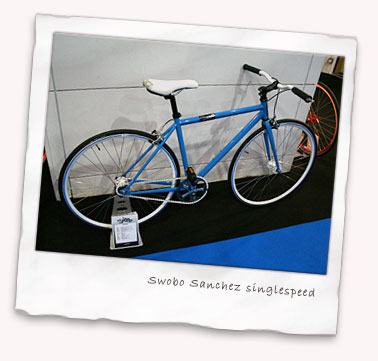 Dave and I visited the Cycle Show at London’s Earls Court on Friday, as we do every year. And every year, a theme emerges during the course of the day.

In the past we’ve had some major interest in mountain bikes, a year of the ’29ers are coming’ thing, a year when everyone seemed to be offering pedal-less toddler bikes and now, this year a big interest in the commuter/hipster/fixie thing.

Everywhere we went were examples of cheap basic frames dressed up in commuter chic colour coordination. In amongst it there was also a smattering of e-Bikes for those less able or willing to pedal. Some of the nicest bikes for me were the £620 Swobo Sanchez fixie/singlespeed which looked a stylish blast to ride as well as having a name which reminded me of the Venezualen leader Hugo Chavez. For better or worse. On the mountain bike side, the Sunn Tzar ticked all the boxes.

The Tzar is a 4130 double butted cromo frame that comes equiped with practically everything you’d want on a modern hardtail – 150mm travel geometry, ISCG tabs to run a chain device or Hammerschmidt setup and replaceable dropouts with let you swap in some horizontal ones for singlespeeding. Quite a tempting looking bike, especially since it has an effective top tube length of 586mm for it’s smaller frame and a 68° head angle! That’s longer than my Inbred classic.

There was also plenty of bike fashion around, something I don’t think you can have too much of. D2B had a rather natty plaid waterproof that I’m quite keen on, while Quoc Pham were showing a tan leather SPD brogue. Plain Lazy had a number of witty bike related tops (I liked ‘Tyred and Tested’ and ‘Man Flu Is Real’). What was nice was to meet Charmaine from Endura and discuss with her some of the technicalities of our next set of ride shirts as there seems many more custom options for next year. 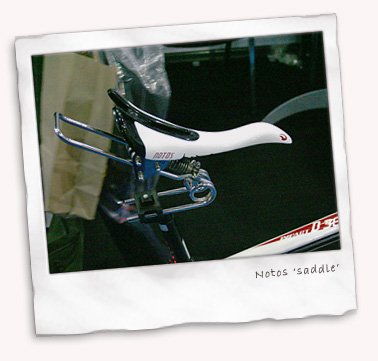 There were, as always oddities. The guy from Gelrilla Grip who objected to his product’s photo being taken at a public show made no sense to me whatever and left me wondering how on earth he plans to market the thing. The Notos saddle which seems to be the answer to a question no-one has asked. And, of course the inimitable Bicygnals LED cycle helmet that apears to put visibility above any real technical ability at head protection.

Ultimately though the 2010 Cycle Show was a disappointment. There was no Trek, no Scott, no Cube, no Lapierre, no Giant, no Genesis, no Madison which meant a big lack of bikes to look at which really is what it’s all about. Ok, so Hotlines had their own bike giveaway going on in Brick Lane which accounts for some of those brands but I knew nothing about that until I read of the Lucky Pierre thefts on Friday morning. I wouldn’t have traipsed to the East End to see them either.

So all in all a day out which continues Dave and I’s Cycle Show tradition but really, not much of a show. I ended up feeling cycling was a bit, well, niche really and we can’t have that can we?

Photoset of the 2010 London Cycle Show are on Flickr.

Filed under Mutterings, Trends in October 2010