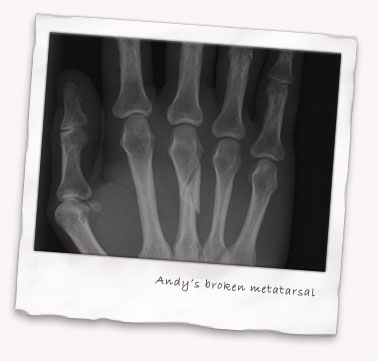 Oh dear! Andy hasn’t had a great deal of luck this year, what with having his bike stolen and everything. Now, just as he looks set to take delivery of a new Pace RC405, he breaks his hand!

The torrid riding conditions of the 2009 Bordon Enduro no doubt were a big contributing factor in all this. With the weather sheeting down conditions were super slippery and poor Andy came to grief in a Rhododendron bush, taking most of the impact with his hand (it’s not just Roadie-dendron Tony then).

Yesterday, Andy sent me the results of his trip to A&E – an X-ray of his hand and the evidence of a nastily broken metatarsal which may, or may not need to be pinned depending on the outcome of further medical opinion. Regardless, it’s going to be a while before he gets to sample that Pace.

Andy, you have my sympathy, that all looks rather painful. Hope you get well soon, I know just how frustrated you must feel!

Filed under Lifestyle, Mutterings in November 2009